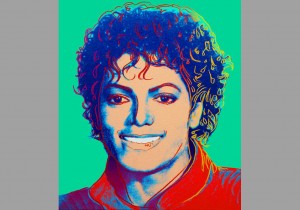 The Vered Gallery in East Hampton has temporarily removed an Andy Warhol portrait of Michael Jackson from the auction block.

The Associated Press reported that gallery co-owner Janet Lehr said in a statement she wanted to offer the 1984 work to “the greatest number of prospective purchasers.”

Pre-sale estimates ranged from one to 10 million US dollars. The painting shows Michael Jackson wearing a red jacket from his Thriller era.

Lehr told the new York Daily news last week that “the painting, which originally came from the Warhol estate, was consigned to the gallery by a New York private collector.”

Michael Jackson’s career as a recording star began at the age of eleven, with the popularity of the first single released by the Jackson 5, a rhythm-and-blues act composed of him and four of his brothers. In 1979 Jackson released his first solo album, and by 1984 he was being touted as the biggest star since the Beatles or Elvis Presley and as “the most popular black singer ever.” In that year, he won an unprecedented eight Grammy Awards for his internationally acclaimed album Thriller.

Andy Warhol’s name is synonymous with the Pop Art movement in America. Like other Pop artists, he often chose to use objects appropriated from popular culture as imagery for fine art. These were often photographs, which were then reproduced onto a canvas through a silkscreen process by assistants. Warhol then retouched them. As he put it, “I sort of half paint them just to give it a style.”