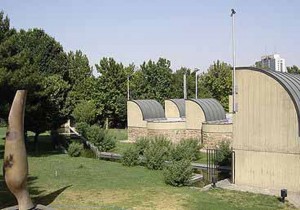 The Tehran Museum of Contemporary Arts is one of the most important museums of Asian modern arts. The museum was inaugurated in 1978 in Tehran and after 30 years, this museum’s treasures are being publicly exhibited for the second time. Four years ago, in the period of Khatami’s presidency in Iran and in the last days of the so called “reforms period”, the treasures were exhibited on the walls of 9 galleries for the first time. The treasures of Tehran Museum of Contemporary Arts is one of the richest eastern modern treasures of the world which can be considered as the most important Asian museum of the world’s contemporary arts.

120 works of European and American modernism’s history are on view since 26 June 2009 in this museum. This launching is the greatest exhibition of western works after the Islamic revolution in Iran. It has to be mentioned that from the 80s up to now, no foreign works has been added to this collection and the treasure lacks the works of this period. This exhibition will be on view until 6 August 2009.