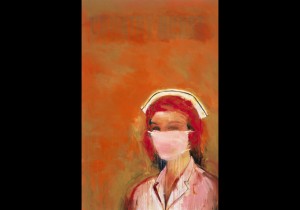 The top price was paid for Night Playground by Peter Doig (b.1959), 1997/98, an exemplary large scale painting described by the artist as one of his own favourites. It was offered at auction for the first time and realised £3,009,250 $5,016,420 €3,553,924, the second highest price for the artist at auction (estimate: £1.5 million to £2 million). A particularly rare urban view, the painting shows night falling on a city playground and portrays the contrast between nature and the man-made. At this evening’s auction, 4 works of art sold for over £1 million 11 for over $1 million, and buyers (by lot / by origin) were 65% UK and Europe, 29% Americas and 6% Asia.

Further highlights of the sale:

· Country Nurse, 2003, by Richard Prince (b.1949), one of the largest works created for the artist’s celebrated and highly coveted Nurse series, sold for £1,721,250 . For the Nurse series, Prince mined his own extensive collection of trashy romance novels from the 1950s and 1960s, lifting the protagonists and titles from their lurid covers and immersing them in layers of pigment. An exploration of female stereotypes, the series was subject to great attention in 2003 when Prince photographed Kate Moss for W magazine in front of one of his pictures while she was wearing a suggestive nurse’s outfit.

· 1025 Farben (1025 Colours) by Gerhard Richter (b.1932) realised £1,385,250 , and was offered at auction for the first time having been in the ownership of the present European owner since 1974, the year in which it was painted. From a series considered to coincide with the most fruitful period in the artist’s career, the work sold this evening is from the last and most accomplished group of colour charts which he painted.

· Untitled, by Cy Twombly (b.1928) realised £802,850 exceeding its pre-sale estimate of £500,000 to £700,000. This important work was executed in 1961, a watershed year in the artist’s career during which he created a number of masterpieces including the Ferragosto series which was recently united in an exhibition dedicated to the artist at Tate Modern last year.