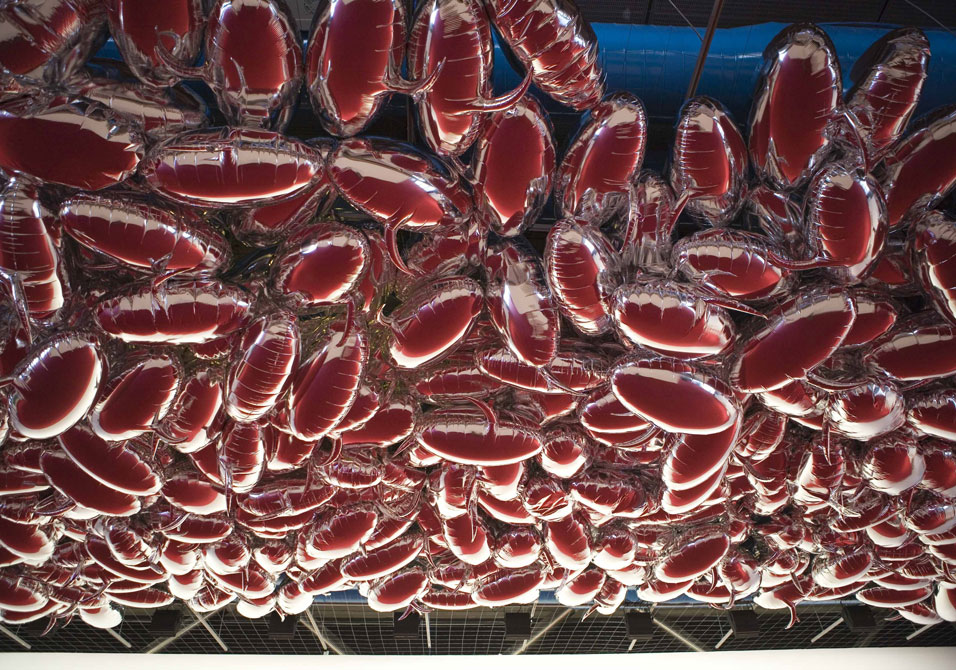 View of the exhibition. © Jean-Claude Planchet, Centre Pompidou, 2009.Offered a retrospective by the Centre Pompidou, Philippe Parreno has come up with a “journey through time,” a re-reading of the artist’s work by the artist himself that is articulated through three elements: the exhibition proper, the accompanying series of special events for young people, and the substantial catalogue.

The first large-scale presentation of the artist’s work in France since 2002, this is also a component of a wider project, being one of a number of concurrent exhibitions that Parreno is staging at leading international venues: the Kunsthalle, Zurich, the Irish Museum of Modern Art, Dublin, and Bard College, NY.

The exhibition will occupy the Galerie Sud, a 1,200 m2 glass-walled space that is both full of light and integrally related to the city outside. Exploiting these features, Parreno avoids the use of internal partitions, the exhibition design being inspired by the notion of contextuality. Exhibited works and other events are organised around the projection on a vast screen of a 70mm film.

Parreno clearly doesn’t see his retrospective as a simple accumulation of emblematic pieces. This is why he insists on the idea of a “journey through time,” hinging on key dates related to his work and development, among them 1968, the year of Robert Kennedy’s death; 1977, the opening of the Centre Pompidou; and 1993, the year of the artist’s own Speech Bubbles.

Seeking as ever to escape the confinement of the gallery’s four walls, Parreno will invite young visitors to develop a series of children’s performances inspired by his past works. Every morning during the first month, primaryschool children and teenagers will present animations developed in workshops with the artist: a project entirely in accord with the Centre’s commitment, since its very beginnings, to promoting young people’s engagement with art.

To accompany the exhibition, two books are to be published by Editions du Centre Pompidou. PARRENO is a comprehensive and plentifully illustrated survey catalogue, including critical essays and the first complete list of the artist’s works from 1989 to 2008, while Parade? is a children’s tale written by Parreno and illustrated by Johan Olander.

Visitors are welcomed by a large light sculpture specially made for the occasion that hangs above the entrance to the exhibition. Inspired by the marquee of the old American movie house, it advertises a film programme. And like the other elements of the exhibition, it is linked to a synchroniser that orchestrates the succession of events.

On entering the exhibition space, one finds a new, red, version of Parreno’s Speech Bubbles (White) of 1997 – an installation of helium balloons in the form of wordless speech bubbles. Every ten minutes, the whole space is plunged into shadow by a system of automated curtains, these conditions offering an opportunity to discover a whole range of works, among them a 70mm film with its hyperrealist image. Parreno also modulates the light within the space by working with shadows. A transparent projection booth in glass appears as an outgrowth of the glazing designed by architects Piano and Rogers.

Finally, the exhibition will also host a number of regular events. A Christmas tree in cast aluminium, entitled Fraught Time, serves as the inspiration for performances by teenagers, with music specially written by London group The Monroe Transfer. Every morning between 11 and mid-day during the first month of the exhibition, Parreno’s No More Reality (suite et fin) of 1993 offers children an opportunity to make shadow theatre using marionettes based on posters of masterpieces of modern art, from Renoir to Matisse. And puppets based on New York illustrator Johan Olander’s monsters for Parreno’s Parade? – a children’s book published to go with the exhibition – will be used for a once-weekly event for primary school children.

From the very beginning, Philippe Parreno has worked collaboratively, first with a group of fellow-artists that started with Pierre Joseph and Bernard Joisten and later came to include Dominique Gonzalez-Foerster and Philippe Perrin. His work continues to revolve around a collaborative multivocality that draws on a wide range of sources, from John Cage to Mikhail Bakhtin.

The works themselves manifest the same commitment to interaction, as for example Sac Ozone (1988), filled with objects to be handled by the public — Parreno has always seen the exhibition as a space of freedom, community and play. It was against this background that in the early ‘90s there emerged the beginnings of a more personal body of work, with the No More Reality project, launched with a video of children demonstrating in a school playground, chanting the slogan of the title. The artist’s reflection on the exhibition as medium, already evident in the earlier collective works, then developed more decisively, leading to Snow Dancing, 1995. This work consists of three elements, one of them a book of the same title that describes an event. This event, a party-like series of micro-events in a single venue, then took place, just as described, at the Consortium, Dijon. The event, in turn, was followed by the opening, which revealed only the traces of its past future. Here, fiction became reality, to the point of being indistinguishable from it.

The early years of this decade saw the conceptual aspect of the work come to the fore, while Parreno’s imaginary became dominated, more than ever, by the themes of the ghostly and of the “hollow” subject. Questions of authorship, of collective creation, of copyright and copyshare were returned to in what are today the artist’s best-known works: Ann Lee (the Japanese manga character bought with Pierre Huyghe who figured in a number of works before her retirement in 2002), Crédits… (a film of 2000, whose full title is the list of the 17 people who worked on it) and Bryannnnnn Ferryyyyyy (a film of 2004, on the law and practice of copyright, made with Liam Gillick). Reflection on the time of the exhibition found expression in Alien Seasons at the Musée d’Art Moderne de la Ville de Paris, in 2002, where the appearance of a cuttlefish in a video triggered the other works. The theme of the ghostly made a return after Ann Lee, with works in fluorescent ink visible only in the dark, disappearing in the light (Fade Away). And in the film El Sueño de una Cosa (2001, MNAM), Parreno conceives of different versions of the same work, which varies in each instantiation, exploring different contexts of presentation, from the cinema to the museum, displacing and remixing his own work.

Parreno gained much acclaim in 2006 for the film Zidane: A 21st Century Portrait, made with Douglas Gordon. In this installation-cum-commercial release the two artists sought to capture presence in the moment, articulating a reflection on time that puts into question its very reality. The series of blank Marquees suggests that exhibitions be experienced in cinematic time, while Il Tempo del Postino, a collaborative performance at the Manchester Opera House, takes Parreno’s exploration of exhibition one step further in “delivering” art in a new way, in a new space. 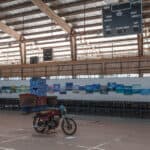