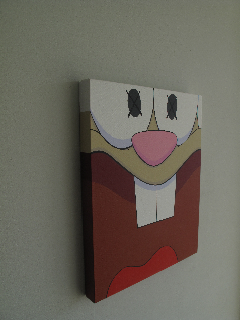 Veterans Jenny Holzer and Barbara Kruger brand the city with sharp words while young kid KAWS with his tongue in cheek and pen in hand creates fluffy havoc and death. The remarkably talented John Copeland’s paintings, that at a glance resembles works from the 50s, reveal a world in which cynical competition, sexual frustrations, strategic warfare and suppressed feelings lurk under the decorative surface. Shooting star Francine Spiegel lets her feverish nightmares run amok over the canvas with a death, rot and destruction trailing rights behind. Peter Sutherland’s poetic lens highlights sensitive nuances and tender colours in stark contrast to both Peter Beste’s razor sharp portraits of musical identities and Dash Snow’s slippery polaroids that clasp onto self-serving decadence and intriguing irony.

Sarah Braman’s strange sculptures balance on the ground and at the knife’s edge between genius and vexing, while they’re throwing pebbles in Joe Bradley’s minimal and provocative shoe, which in return kicks prejudiced hipsters in their hypocritical behinds. Hyped Agathe Snow from the 2000s empties a dustpan of art, shit and filth over traditions and superstition, while 80s cult hero Rammelzee unleashes his army of complex and gruff superheroes in a hierarchical world of catastrophes and doubtful redemption.

A common denominator for the city, the artists and the works is defiance against generalizations and predictability. And they are tangled together by connections that in some instances are straight as Broadway and in others are twisted as the alleys of Brooklyn. It races through time and dwells in the moment. Skips generation gaps and swoops under genre definitions. Pisses on narrow minds and gallantly opens the door for curiosity.

The New Yorkers is an ode to the thoughts that dare stand alone in both shade and sun, and at the same time also has the courage to open up and let inspiration flow freely. The exhibition is also a unique chance to experience a rare and sublime piece of New York in Copenhagen. The New Yorkers is curated by Mikkel Grønnebæk and Todd James. More Info:V1 Gallery