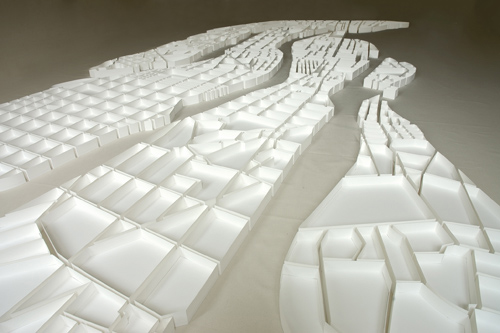 Matthew Picton / Bronwen Sleigh / George Charman
Exhibition: 1st to 31st May
William Angel Gallery is proud to present ARCHITECTURA, a group exhibition featuring the works of Matthew Picton, Bronwen Sleigh and George Charman. Excavating and exploring architecture and modernist space through a variety of media, each artist seeks to undermine the culturally defined biases and perspectives which the viewer brings to the work.

Matthew Picton’s paper sculptures combine multiple layers of simultaneously functioning organic threads within a city. Economic, political, and social powers manifest themselves within an urban landscape, marking out the metaphysical effects of history and contemporary progression. Layering each strand, he seeks to provide a linear perspective through which the viewer encounters the complexities of contemporary topography. In ‘Vienna’, Picton seeks to create order within the chaos of an integrated map. Elemental foundations of power dissected, he transforms a two dimensional topographical and street map into a multi-dimensional, multi-layered work.

Similarly influenced by experiencing the contemporary urban cityscape, Bronwen Sleigh works from photographs that collide the “progressive” elements of urban development with the destruction of nature in a constantly evolving and shifting landscape. Meticulously reconstructing such urban environments, she works first from three-dimensional machetes, eventually transforming inhabitable spaces to etched abstracted maps. The flattened abstractions allow the viewer to experience such urban landscapes distilled.

Perceptions of space, and knowledge of those perceptions, provide George Charman with a point of departure from which to deviate from traditional modernist explorations of the physical environment. Distorting elements in his depictions suggest a theoretical exploration of the architectural perspectives possible within a given frame. He manipulates our view through shifting surfaces and depth perceptions to provide a simultaneously concrete visual language. That of modernist architecture experienced beyond the traditional modes of representation, releasing space from such culturally ascribed functionality.

My we, Your we, Our we: A solo show of Marco Godoy at Copperfield, London