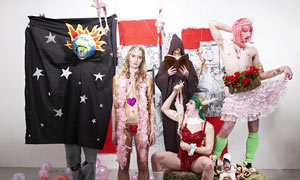 The Observer newspaper have a special Music Monthly featuring art well worth a look, one of the best featrures is “Every picture tells a story Eight pop stars reveal the art that has most inspired them, from 60s legends and surrealist dolls to outrageous manga sculpture” link Richard Hamilton, Asger Jorn, Sage Vaughan, Antony Gormley,Hans Bellmer,Takashi Murakami and Peter Blake all feature.
Strangley no photos of the work online but they are in th eprint magazine.
There also many more articles just follow this link