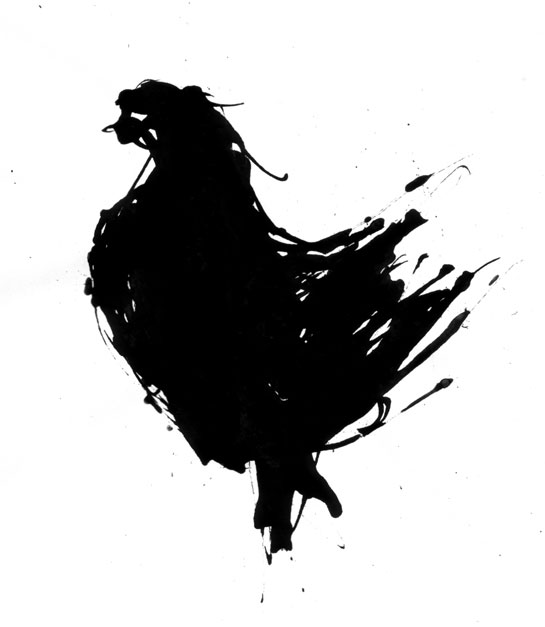 Echoing Joseph Beuys’s ‘I Like America and America Likes Me’, 1974, ‘Roost’ weaves together a seemingly disparate collection of elements into a whole that is more magical working than simple Action. Finding connections between Financial meltdown, Global Pandemics, Pop Art, the fear of assassination in the public mind, Voodoo ritual, Voodoo economics, the charade of the Vote and the advent of late-stage Capitalism, ‘Roost’ attempts to divine the true nature of the Panic that cyclically grips the Popular imagination.

For the four days and three nights of Easter (April 10th-13th, 2009) David Dorrell will be locked in the Maurice Einhardt Neu Gallery with two chickens as he makes various works and undertakes certain actions – some of which will be directed by the audience – in an exploration of re-birth and resurrection that aims to expose the archaic roots of our collective fear and the response mechanisms that direct it.

Part art show part ritual, Roost seeks insight into the dynamics of the collective unconscious through sacrifice, invocation and the de-mystifying of the rubric that surrounds us in the Media-sphere.

David Dorrell’s stance in the art world has seen him usurp, challenge and question the role of art, the artist and the viewer directly with the frequent uneaseness of the subject matter; whether using his own blood to paint 7/7 suicide bomber Mohammad Sidique Khan’s ‘Martydom statement’ on the walls of FMCG Gallery or initiating the nomadic art-space ‘Slayer Pavilion’ (alongside Melissa Frost & Mihda Koray) during the 2007 Istanbul Biennale. Recently, Dorrell, acutely aware that anything attributed to an artist has it’s worth, and at a price, sold artists text messages (to him) as ‘Readymades’ at the Gavin Brown Enterprises stand at Frieze Art Fair, London 2008.

Dorrell, a self-confessed autodidact, has always found fascination poking around in the entrails of what passes as pop culture – writing one line Situationist poems for The Modern World fanzine as a teen Punk, ushering the word Goth into popular usage as a writer at the NME during his twenties or mixing Dada ‘cut-up’ with Grandmaster Flash to produce ‘Pump Up The Volume’ as M|A|R|RS, his obsession with language, meaning and symbology have left an indelible mark on our cultural landscape.