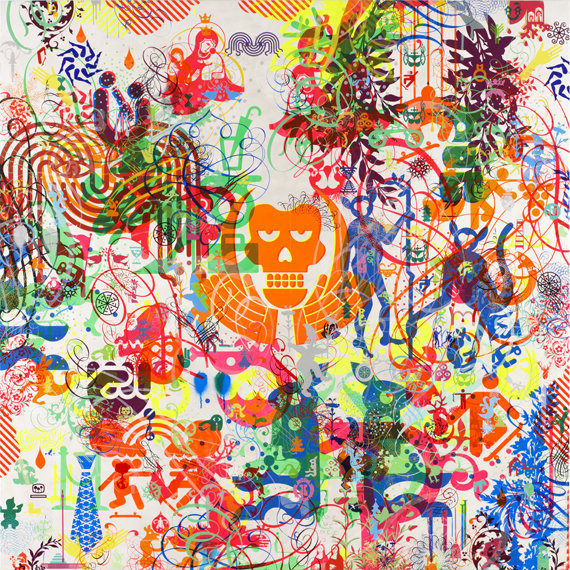 McGinness merges several of the most important directions in contemporary painting. His work combines all-over composition, inspired by Jackson Pollock and the mechanical silkscreen process inspired by Andy Warhol. The work also fuses naturalistic and contemporary pop culture references. His imagery derives form a broad range of sources: from dreams and hallucinations to song lyrics and fragments of art history. There is a push and pull between content and form, and between literal meaning and intuitive feeling. McGinness’s paintings represent his own mental landscape. His compositions reflect the infinite, ever-flowing continuum of the universe.

The opening of Ryan McGinness Works. coincides with the release of a new book of the same title, published by Rizzoli. The hardcover 296-page book is a process-revealing catalogue of recent works which includes a behind-the-scenes look at McGinness’s last Deitch exhibition in 2005. Included are texts and interviews by David Byrne, Tom Greenwood, Peter Halley, Greg Lindquist, and Jonathan T. D. Neil.