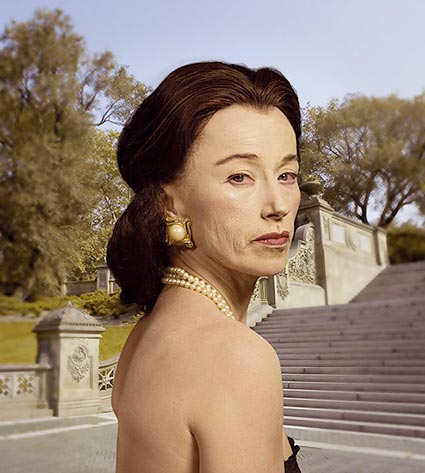 Untitled #465, 2008 Color photograph 163,8 x 147,3 cm Sprüth Magers Berlin is delighted to present Cindy Sherman’s first exhibition of new work in Europe since 2004. The fourteen colour photographs assembled develop Sherman’s longstanding investigation into notions of gender, beauty and self-fashioning, and reveal a particular concern to probe experiences and representations of aging. Working as her own model for more than 30 years, Sherman has developed an extraordinary relationship with her camera, and her audience, capturing herself in a range of guises and personas which are by turn alarming and amusing, distasteful and poignant. A remarkable performer, subtle distortions of her face and body are captured on camera, leaving the artist unrecognizable as she deftly alters her features, and brazenly manipulates her surroundings.

To create her photographs, Sherman shoots alone in her studio, assuming multiple roles as author, director, make-up artist, hairstylist, wardrobe mistress, and of course, model. The idea and experience of getting dressed up and putting on a show is central to Sherman’s practice, yet Sherman is also careful to closely manage the detail of each performance. Every bulge of flesh, strand of hair, rouged cheek or wrinkled brow is deliberately orchestrated to construct a vividly real yet curiously inscrutable character. The tension between pathos and alienation which Sherman’s figures evoke in the viewer are heightened by the contexts in which they appear, always obviously staged and cleverly apposite. Her creations are photographed in front of a green screen, and then digitally inserted onto backgrounds which are shot and manipulated separately, scenarios which elaborate and complicate the narrative constructed by Sherman’s garb and gaze.

Each of the women which feature in Sherman’s new exhibition share an acute consciousness of glamour and social hierarchy, which is both disquietingly flagrant and sardonically relevant to contemporary obsessions with image and status. In one photograph (Untitled, 2008), the fiercely proud eyes of a woman installed in her warped and blurred country estate stare out of a face regrettably cracked and peeling with age, ill concealed by make-up, hair-dye or expensive pearls. In another work from the series, a woman with a tight sequined skirt, fake gold jewellery and extravagant fake white nails also glares out, perhaps daring the viewer to call her trash, or ruefully acknowledging that this is what she is. It is ultimately impossible, however, to fix any stable narrative in Sherman’s work; different levels of pretence and authenticity operate and interact in her images to complicate any straightforward reading of her characters, or the stories they might tell the viewer.