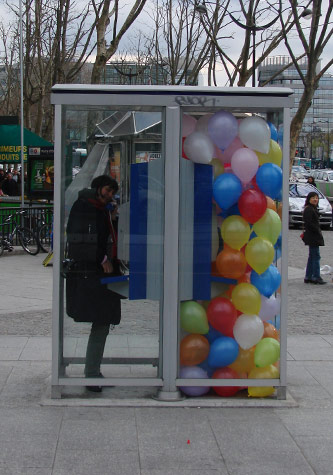 There are multitudes of signals and systems that govern our cities and imperceptibly determine our everyday movement. Artist Brad Downey stakes a claim for the right of the individual to interpret and understand these systems, and thus regain power in the public arena. As a public, we are acclimatized to these signs and beacons, and their subtle manipulation and proliferation can go undetected. Brad Downey, via his art, shines a light on this institutional regulation of public behaviour. By wider awareness of these controls, his viewing public, he hopes, will gain greater understanding of his own urban and social situation. Subtle, comic and very often provocative, Downey aims to surprise the viewer, by illuminating how public, private property, urban space and personal experience overlap in an era of increasing privatization. He finds forgotten remnants of urban architecture to re-invent and rejuvenate. These are then re-inserted into the everyday landscape. The works are a temporary disruption, usually remaining in place for as short a time as a few minutes, but also sometimes becoming a permanent fixture in the landscape of the metropolis.

“Brad Downey is a graduate of the Fine Art Master’s programme in painting at London’s prestigious Slade School of Art, where he studied under Bruce McLean. He grew up in a United States Marine Corps family that settled in many towns and cities across the United States. This upbringing gave him unique insight into the variations and similarities in the 20th century urban environment. His studies at Pratt Art Institute drew him to New York City in 1998, the city that catapulted his unique approach to fine art. Stimulated by the buzz of the city, he began to seek out alternative artistic methods for reacting to his urban environment. Downey regularly lectures about unsanctioned public artwork. He is exploring its adaptation in traditional gallery settings in London, Berlin and New York. He was named as one of the “ArtReview” 25 MA graduates to watch in 2005. He has been featured in The New York Times, Creative Review, the Atlanta Journal Constitution and BBC Mundo, among others. He has exhibited in venues such as Urbis museum in Manchester, Kunstlerhaus Bethanian in Berlin, the Basil Art Fair in Miami, the ICA in London, and Mass MOCA in the USA. Brad Downey uses film, sculpture, painting and drawing, among other media, and is currently situated in Berlin.
Stolen Space