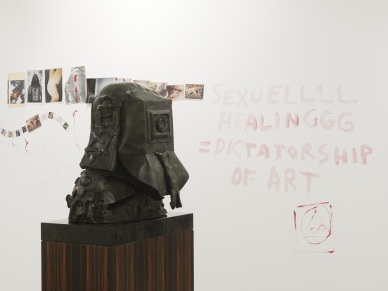 Stuart Shave is proud to present the third solo show of German artist, Jonathan Meese at Modern Art. Meese has risen to acclaim and notoriety over the last decade through his epic scale paintings, bronze sculptures and highly physical trance-like performances. Meese’s very personal performance and artworks often channel and reference violent dictatorial figures, seeking to make nonsense of their atrocious histories and via this deconstruction, make fresh sense of their actions, expressing the artist’s wish to “bring up everything again through dirt”. Often, the manner in which this is carried out is shocking and cathartic, as imagery of Swastikas, genitalia and monstrous faces converge in vast paintings and towering bronzes, in front of which the artist signs off with a Nazi salute.

In the same way, themes as wide ranging as the lives of Richard Wagner, Hitler and the Marquis de Sade jostle up with cinematic personalities such as Scarlett Johansson, Noel Coward, Marlene Dietrich and Dr. No and are amalgamated in the mythological construction of Meese’s own persona within his works. “CASINOZ BABYMETABOLISMN” (Put DR. NO’S MONEY in your mouth, Baby) continues the artist’s pre-occupation with metabolism as both a consuming power and producer of energy. This particular exhibition hints at the consumptive properties of the surrounding economic market. The show features a unique new body of work, including large-scale paintings on black canvas and a series of bronze sculpture. Giant triptychs represent Meese’s current fascinations: ripped up sex dolls, original German banknotes from the recession of the 1930’s, magazine images of Johansson, motifs of the Iron Cross, soft toys and underwear.

These are held down by swathes of transparent acrylic that give the work a moving, fluid notion. Throughout the work of Jonathan Meese, there exists a hopeful re-ordering through chaos, where the artist proposes a very particular, personal world that dedicates itself to the “revolution of art”. Meese’s enthusiastic role as “Art Dictator” employs the language and intensity of despotism, while proposing something much more pure, optimistic, naive even. Through this, Meese’s unaffected innocence is transformed into an insistent production. More Info:www.modernart.net
Also read the review over at ArtObserved