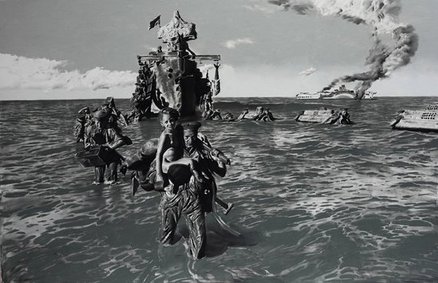 DATES: January 17 – February 15
In works of powerfully compelling strangeness Kaprielov applies the visual language and techniques that developed in the golden era of mid-twentieth century European and American commercial illustration, by artists like Norman Rockwell, Gil Elvgren and Norman narrative of dislocation and mystery.

During the Second World War, Norman Rockwell painted the Four Freedoms series, which was completed in seven months and resulted in his heroically losing 15 pounds. The series was inspired by Franklin D. Roosevelt’s then famous speech on the four principles of universal human rights. Such works mined a vein of popular sentiment and circulated messages of social harmony to a mass audience.

In an inversion of Rockwell’s didactic realism, Kaprielov suspends narrative legibility and presents us with enigmatic scenes from an imaginary world. Kaprielov’s fictive settings incorporate the breadth of human history: arid, post-apocalyptic landscapes, antique monuments and ind al interiors. Paradoxical parings of people and objects create an oneiric internal logic, so that rather than functioning as puppets in prosaic social commentaries, his figures offer a flickering empathic engagement with the experience of something at once alien and familiar, the realm of the uncanny.