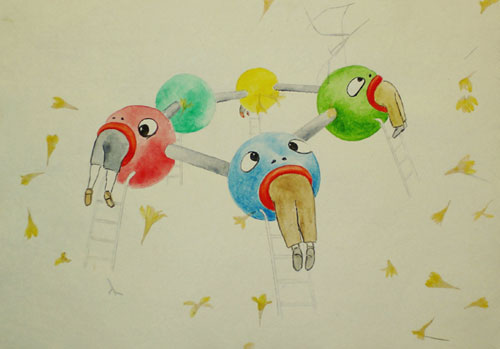 French and Estonian artists Anne Brégeaut and Marko Maëtamm. Being simultaneously autobiographical and fictional, the works exhibited embody, with humour and auto-derision, authentic odes to life alongside acidic complaints about the difficult relationship between oneself and the other. Throughout these worlds of disconcerting sincerity, the spectator becomes a privilegied viewer to the intimate worries and emotional tragedies experienced by the two artists. The apparent naïvety in Brégeaut and Maëtamm’s works stems from an orchastrated play created to overcome certain fears; almost as a way to avoid confronting in a responsible and adult manner any so-called rational truths and daily conflicts.

To say that Anne Brégeaut’s work deals with the theme of the amorous relationship would be an euphemism, so much is her implication in this task unconditional. The artist states that her work does not relate to the fact of being a woman but rather to the nature of the relationship with the ‘other’ and particularly with our common clichés of happiness. Through her gouaches, small sculpture-objects or animations, the ‘you’ and the ‘I’ are therefore omnipresent and yet remain anonymous.

The eclectic compositions within Brégeaut’s gouaches present elements of various scales which are combined to recall how our subconscious can interfer, sometimes despite ourselves, with reality. Thus, characters and various objects taken from another dimension emerge from colourful backgrounds formed by repeated patterns, hinting to the overall tone. These elements seem to act as clues, composing the little stories which inhabit Brégeaut’s world. The sculpture-objects also contribute to this narrative – being predominantly victims of their fragility, they appear to witness to a gentle suffering. This dialectical approach reveals the importance of language in her work whether it is translated through visual associations or merely through words.

Flirting inexorably with his own reality, Marko Mäetamm enjoys the act of confessing. His status as an artist is predominantly at the origin of a series of fictional “mises-en-scènes” during which conflicts and familial dramas escalate towards irreversible acts and the ultimate sentencing. Mäetamm guiltlessly manifests all sorts of taboo feelings and, despite the tragic tones, a dark sense of humour, reminiscent of a contemporary satire around social behavior, is evident. The presented drawings and videos openly reveal, such as an exorcism, the artist’s fear of not being able to live up to his role as head of family. Does he merely evoke his own distress when he pretends not to be strong enough to live in our world and wanting to get rid of his family?

In front of this emotional outpour, varied reactions ensue, from a feeling of unease to the unexpected and liberating laugh. Mäetamm’s work is ironically subtle; playing with the daunting aspects of life in general, whether they are personal or ancestral fears or fears which are buried deep in our memories.
More Info:nettiehorn.com