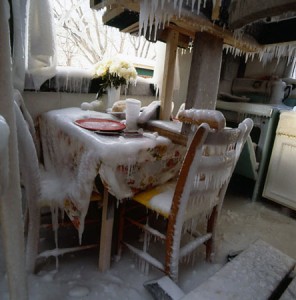 In the second second solo exhibition of American artist Chris Larson at magnus müller, we show his latest video work “Deep North” as well as photographs created in this context. Moreover, drawings and a new huge wooden sculpture are seen in the exhibition.

During the opening, we presented together with the noted European publisher Hatje Cantz Chris Larson’s first monograph titled Failure, edited by Soenke Magnus Mueller. The book has been produced in conjunction with the Rochester Art Center, which is currently showing the exhbition Deep North.

Chris Larson engages his imagination in different artistic disciplines, including sculpture, photography, drawing, performance and filmmaking. He focuses on extravagant, large-scale wooden machine sculptures, which sometimes remind us of Leonardo da Vinci’s machines and torture devices from the inquisition era. Resembling bizarre constructions “from another time,” they take center stage in his videos, which – enriched by elements from mythology, magic, gospel music, farming and neurology – create a “dark romantic” stage setting with sexual allusions and references to art history (Bruegel, Fuessli, Piranesi, C. D. Friedrich, Barney), religion and literature (Kafka). There is often a main actor, acting as a “slave of technology.” who operates the complex apparatus, while living through an indefinable state of joy and pain. It is left to the viewer’s imagination to find out what the real function of the machinery might be and which consequences its operation may involve.

In his new 8 minutes film Deep North, Larson has expanded the number of actors in comparison with former works. Three young women produce and transport cylindrical ice blocks from one end of a frozen ice encased house to the other by working a huge wooden machine. It seems as if the house had been left in a hurry, after the colossal machine had crushed into it, thereby creating a new Ice Age. The severity and exertion of the women, dressed in grey felt suits, dominate the event. The machine’s squeaking and creaking, the ice cylinders’ tictac as well as the clattering of the wooden cogs form a rhythmical, spherical sound. Many elements of the film remain mysterious: How did the ice get into the house? What is the function of the circulary arranged ice blocks resembling an organ? What is the purpose of the women’s work? It seems that the women’s main ambition is to get over the cold and rigor with the help of movements which produce energy. As is so often the case with Chris Larson films, it is up to the viewers to conceive of or else to interpret the meaning of this surreal event.

Chris Larson was born in 1966 in St. Paul, Minnesota, where he still lives and works. Since 2008, his video County Line is part of the new location of the surrealistic collection Scharf-Gerstenberg/New National Gallery/National Museums of Berlin. Moreover, in 2008, his film Crush Collision, purchased by the New National Gallery Berlin, was shown in the Art Basel section Art Film as well as in the group show Screen Spirit_Continued #8 in the Staedtische Galerie im Buntentor in Bremen. In 2009, the Kuenstlerhaus Bethanien in Berlin will be organizing a Chris Larson solo show.