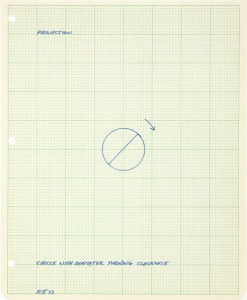 “Untitled – Concept for Projection”, 1972 Drawing in blue ink on graphic paper with a green grid
26,5 x 21,5 cm / 10.4 x 8.5 inches signed and dated (RB’72) on the front bottom left
Robert Barry who lives in New Jersey, is one of American Conceptual Art’s most significant protagonists. The term of conceptual art was introduced into the debate by Sol LeWitt in 1967 in his essay, Paragraphs on Conceptual Art, in which he formulated his proposition that the idea by itself can already constitute the work of art.

It applies neither to a uniform style nor a common theory but as a classification, identifies works that articulate in highly abstract form a notion or a thought process which the viewer is free to assimilate and allow to operate and bear fruit through her/his own connceptions

Though Barry set out on his artistic career as a painter, he has been interested from the beginning in investigating the relationships of surface and space/volume, of positive and negative, present and absent forms, and in void form being completed by the onlooker. By the late 1960s, Barry was pushing his work to the limits of immateriality and invisibility with utmost rigour, creating site-specific installations with wire and nylon thread or with inert gas and radioactive material, moving on then to works using acoustic frequencies, sound and language. Projections and text pieces came about that articulated a thought process or listed concepts.

In the early 1970s, he began working almost exclusively with the medium of language. Now, the terms, liberated from any syntactical context, were not in themselves art but took one to concepts beyond and which were communicated by means of language. Examples are the fathoming of spatial experiences and dimensions which Barry has been pursuing consistently all the way to the word spaces known today, his Wallpieces, Floorpieces, Windowpieces etc. He operates with the media of painting, drawing, sculpture, video and photography. Throughout the host of different working strategies that Robert Barry applies, the principle of invisibility, his crossing of spaces, the serial principle, reversals of letters and his use of transparent and reflecting surfaces, his appeal to the viewer is that first perceptions not immediately bursting with evident meaning or which do not result spontaneously in an identifiable image, should be questioned; that we look again, look carefully, look through the space we are in, look for connection, links, associations in order then to participate in the radical reconstruction of the lost art of seeing.

The works on paper shown in this exhibition date from the 1970s and follow chronologically on those gathered in the comprehensive retrospective, Some places to which we can come. Robert Barry. Works 1963 to 1975 which was shown some years ago at the Kunsthalle, Nuremberg and the Aargauer Kunsthaus in Aarau, Switzerland (we have paraphrased parts of their catalogue texts) and, like Barry’s entire early work, they can be seen to be an aesthetic and formal platform the impulses of which still inform the contemporary understanding of art.
The link to the artist’s very latest works is embodied in a Windowpiece with words of mirror-coated vinyl foil, designed in 2008 for the window frontage of our gallery.

With “Works on Paper from the 1970s” – and a new windowpiece, Galerie Bugdahn und Kaimer is pleased to present its sixth solo showing of works by Robert Barry. 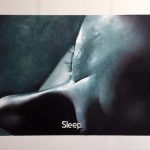 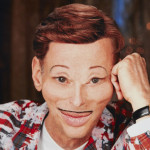 Sprüth Magers is to present John Waters’ first ever exhibition in London.