The first show at Meyer Riegger gallery space in Berlin is a new site-specific work by artist
Jonathan Monk. This showroom allows the gallery to expand, adding to our space in Karlsruhe, which we have worked from since 1997.

Using the location of the gallery, on Friedrichstrasse close to the former border crossing point Checkpoint Charlie, the conceptual artist Jonathan Monk had a series of portraits made that refer directly to Martin Kippenberger’s painting series “Lieber Maler, male mir… “(Dear painter, paint for me..) from 1981, in which Kippenberger is portrayed standing in front of a souvenir stand by the Berlin Wall in one of the twelve paintings.

Monk siezed on this scene and commissioned reproductions by seven Chinese painters, unknown to him,whose advertisements he found in an internet forum. FANG, HUI, LI, MEI, TING, XIAO and XING – the names of these painters – generated a series of seven identical views, which Monk joins under the title “Lieber Maler, bitte male mich noch einmal” (Dear painter, please paint me once again…). The name of each painter functions as an indexical reference, signifying the individual painting, but other than this not classifying it and instead registering it within a series of repetitive images. This way, the series is made for a limitless expansion, the numbering of which only begins when the first painting is sold, therefore standing in direct proportion to and dependence on cultural and economic prosperity.

Jonathan Monk’s painting cycle is a boundless configuration of an artistic commentary by Martin Kippenberger, who commissioned photo-realistic paintings by a company for movie sign painting in Berlin. By delegating his own painting to others Jonathan Monk demonstrates a multiplication of the duplication that Kippenberger arranged: while the latter had his paintings copied from photographs that he had taken, Monk’s paintings exist as images of a secondary order, preceded by the generation of Kippenberger’s paintings. While giving the methodic attribute priority, Monk mediates a self-promotive form of art as a recording, borne by concept and carried out with illusionist means, which is polemically introspective within the context of a political affront.

The series “Lieber Maler, bitte male mich noch einmal” consists of a system circulating within itself, by narrating art as art, therefore speaking of itself, without incorperating the concrete self-expression of the artist. Where Kippenberger retains a reference to his own person in the form of the paintings’ subject, in Monk’s case it is merely the action which remains as a trace in his work: This conceptual artistic stance is counterposed by an action as a service and – due to the unlimitedness of the series’ edition – reduces the relationship between original and reproduction to absurdity. Monk thus subverts the originality of a painting beyond the process of creation by a reduplicating the negation of authorship and so creates a radically constructivistic double negation, in which his person only appears as a phantom in the form of his name ( and the Chinese painters’ names) in the caption. The artist uses a self-reflexive and yet simultaneously self-disappropriating language that undermines the attribution of substantiality and veracity as an autarchic system.

Cleaving to self-irony, with the exhibition Souvenirs from the East Jonathan Monk presents an artistic, art
history-based strategy of exaggeration, in a multiple process of recollection, as experimental as it is paradigmatic –
including repetition and variation of a gesture which is critical of society. As a repitition-based form of a ‘conversation piece’, Monk caricatures Kippenberger’s satiric-realistic depiction of a delusion. Jonathon Monk takes
on the role of a commentator who ultimately paints art’s portrait with his work from a ‘bijective’ point of view. 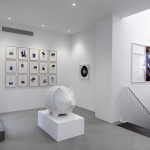 For his sixth solo exhibition at Lisson Gallery, Jonathan Monk revisits narratives drawn from his own biography and transforms historical works by artists that have also proved to be personal, formative influences. 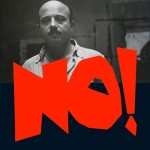 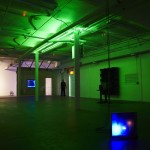 Opening This Week : A Group Show ‘Nostalgic For The Future’ at Lisson Gallery