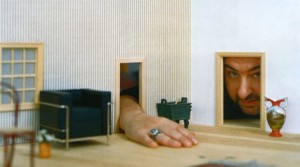 The new Gallery commission at BFI Southbank is a collaboration between visual artist Pierre Bismuth and acclaimed film director Michel Gondry. For the BFI they have created a new version of The All-seeing Eye, an installation which explores, this time in the visual arts field, the themes at the core of the feature movie Eternal Sunshine of the Spotless Mind, directed by Gondry and based on an original idea by Bismuth, and for which they got the 2005 Academy Award for Best Original Screenplay, making Bismuth the only contemporary artist to ever have received an Oscar.

The exhibition explores one of the most successful collaborations to date between a contemporary artist and a filmmaker and exemplifies how today film and art are interconnected. Like the film, The All-seeing Eye shows subtraction as the metaphor for a world without communication and relationships: a room is stripped bare, the non immediately apparent visual erasure taking place creates a moment of displacement in the spectator comparable to the feeling experienced when a memory is lost, despite its strength and against one‘s will, simply by means of time passing. The theme of memory and its erasure links The All-seeing Eye with Eternal Sunshine, a connection that is underlined by a television in the room playing a scene from the film throughout the piece. The subtractive process of scenery changes, seemingly high-tech, was instead manipulated off-screen in real time while filming, an example of Bismuth and Gondry’s shared fondness for special effects created by low-tech or non-digital means.
The All-seeing Eye (the hardcore-techno version) is courtesy of the BFI and Cosmic Galerie, Paris.

The exhibition is accompanied by Today is the Tomorrow of Yesterday, a series of films selected by Pierre Bismuth and Elisabetta Fabrizi, BFI Head of Exhibitions, on the theme of erasure.