Last night I went to the opening of Paranoia, the new show at Leeds City Art Gallery (which will subsequently transfer to Focal Point Gallery in Southend and the Freud Museum in London prior to an international tour).

At least, I intended to go to the opening. Unfortunately, as ever I got delayed by one thing and another, so didn’t leave the house until nearly 5.30pm. Got to Sheffield Station in time for the 6.08 train, which ought to get me to Leeds with about half an hour to spare to look around the show. Ah well, better than nothing.

Unfortunately (again) my train broke down as it got into Castleford. I had to sit around for about 20 minutes twiddling my thumbs before finally the train started chugging, very slowly, backwards, to Leeds. Got to the station at about ten-to-eight, ran to the art gallery, and arrived just as the bottles of free wine were going back into boxes (damn!) with about two minutes to try and dash around the whole show. I didn’t manage it, nowhere near, and I was so flustered that I didn’t really get a chance to take in any of the work, which was a huge shame as this looked to be one of the most fascinating art shows I’ve visited in a long time. There was a diverse and engaging body of work from many international artists in every medium imaginable. Some large metallic photographic prints (which I subsequently discovered were by Martin Effert) caught my attention, and once again made me realise how bad the Tom Hunter work at Sheffield’s Graves Gallery really is. In the centre of one room was an Arab in a cage (yes, a real live Arab in a cage), Doug Fishbone’s “Performance with an Arab”, which was both attention-grabbing and poignant. As I arrived, I had obviously just missed another performance relating to a woman’s paranoia about her appearance: a bare-footed woman in a white dress walked away from one of the gallery’s permanent statues (a classical female nude) which was encircled with hundreds of discarded cotton wool pads, womens’ magazines and assorted beauty products. Next door another woman, in Middle-Eastern dress, sat with her daughter, surrounded by bread and cotton wool. Obviously the aftermath of Rana Bishara’s “Bread for Palestine” performance.

There was just so much going on, and so much to see, I wanted to let it all sink in. But before I could the curators came around, sweeping everyone out of the room. I was left on the steps outside, alone. Not wanting my trip to Leeds to be entirely wasted, I found a very good Japanese restaurant where I ate smoked eel teriyaki and got very drunk, before hopping on the late-night train back to Sheffield. 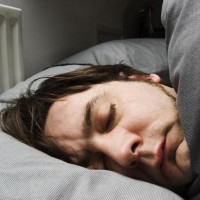 Dan Sumption co-founded FAD with Mark Westall in 2001, and divides his time between Sheffield and London.