Spirit Guides and Other Guardians Joining Heaven and Earth is an exhibition of new work by British artist Billy Childish. The exhibition features classic art historical themes: landscapes, bathers, and river scenes abound. The title reflects tenets of Childish’s philosophy towards life—that it is a spiritual journey focused on joining heaven and earth—as well as his feelings about painting, which he believes should always aim to connect the spiritual and the material. Childish feels that creative expression, as well as the beauty of nature, allow for connection to the divine, and each painting in Spirit Guides and Other Guardians Joining Heaven and Earth offers a glimpse into his worldview. The artist’s titles often come after his work is created. Uninterested in illustrating a particular viewpoint or directing viewers to think or feel anything specific, Childish paints directly from his subconscious, leaving each work to be “read” afterward in much the same way as one would interpret a dream.

Throughout the exhibition, images of the Pacific Northwest appear again and again. The artist has a strong personal connection to the area, dating back to the 1990s when his band Thee Headcoats played a number of shows in Seattle and along the West Coast. Works like puget fishermen (2022) poetically capture the peace and silence of Puget Sound at dawn, while the expressive brushstrokes of strawberry tree and mount tahoma (2022) reflect the majesty of the natural beauty found in the region. Many of the paintings in the exhibition feature images of Mount Rainier, also known as Mount Tahoma. This mountain is a site of deep personal significance for the artist; Childish met his wife in Seattle, and they were married in Madrona Park with Mount Tahoma rising in the background. In moonrise mount tahoma (2022) a lone figure stands in a long boat, oar in one hand, hat in the other, staring out at the viewer from an ethereal landscape. Whether the man pictured is a friend, stranger, spiritual guide, or the artist himself is ultimately left for us to decide.

Childish has labeled himself a “radical traditionalist” and his dedication to representational oil painting has remained unshakable across his career, regardless of the medium’s popularity or position within contemporary artistic discourse. He has maintained an anti- establishment, anti-authority stance, and resolutely resisted any connection with particular groups or artistic movements, identifying instead with artists who worked outside of these confines, such as Vincent van Gogh, Kurt Schwitters, and Edvard Munch. Childish fundamentally considers artistry to be the sacred inheritance of every human being, and exhorts everyone to create, stating:

If you’re born here, and you’re here on earth, you are meant to express certain things—you can be a vehicle of collective consciousness.

Billy Childish (b. 1959, Chatham, Kent, United Kingdom; lives and works in Whitstable, Kent) is known for his introspective, autobiographical, and deeply emotional paintings, writing, and music. After leaving secondary school at age 16, Childish worked at the Naval Dockyard in Chatham as an apprentice stonemason. Initially denied an interview to the local art school, he produced hundreds of drawings that gained him entry to London’s Saint Martin’s School of Art. Childish’s defiance of authority led to his eventual expulsion from art school in 1981. Since then, Childish has gained something of a cult status worldwide, writing and publishing several novels and more than 40 volumes of confessional poetry, recording more than 150 LPs, and painting several hundred works. Through all of these disciplines, Childish addresses social, political, and personal issues such as war, protest, his turbulent childhood, and his struggles with addiction. While his confessional poetry and music explore these issues with startling honesty, Childish’s paintings are more subtle. His subjects are often drawn from his environment or are people he knows or admires: birch forests, self-portraits, a lone figure in a pastoral English landscape, and his wife as a reclining female nude. Childish works quickly and intuitively, making spare marks on raw canvas that leave much of it visible. He identifies with artists who worked outside a group or movement, intrigued by their outsider roles in society, such as Vincent van Gogh, Kurt Schwitters, and Edvard Munch. Labeling himself a “radical traditionalist,” Childish has a reverence for traditional oil painting yet has resolutely resisted any connection with a particular group or artistic movement. 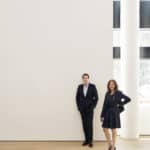