Christie’s is launching Department X – Sneakers, Streetwear & Collectibles, a new department focused on this emerging collecting space, led by a team dedicated to auctions and private sales. Department X offers rare collectibles across a number of genres – music, fashion, art, and sports history – bringing the best of this exciting category to a new generation of collectors. From offering history-making footwear to iconic pieces of hype culture, Department X will hold online auctions, with live previews in New York, as well as private selling exhibitions throughout the year. Department X builds on Christie’s understanding of popular culture, and strong worldwide performance in the Luxury category, following the recent success of Six Rings – Legacy of the GOAT, featuring rare Michael Jordan sneakers and collectibles. To mark the launch of Department X, Christie’s will present a private selling exhibition of two rare pairs of sneakers titled, “Ye Walks.”

Department X will be led by Caitlin Donovan. Born and raised in downtown New York, Caitlin has extensive interest in and knowledge of the luxury and fashion markets, specifically Sneakers & Streetwear. Caitlin is a founding member and current Head of Department, Americas, for Handbags & Accessories. She has spearheaded this new sneakers, streetwear and collectibles initiative at Christie’s, introducing this new category over the course of the past three years of specialized sales. Caitlin will take on the role of Head of Department, Department X, where she will continue to utilize her deep knowledge and interest in these new collecting markets to develop exciting contemporary sales for a burgeoning collector base.

With a finger on the pulse of popular culture, and the evolution of what is defined as luxury today, we are proud to announce the launch of Department X – Sneakers, Streetwear & Collectibles. With exciting sales that will cross several genres of popular culture and collecting – music, fashion, and sports history – I am excited for new and existing clients of Christie’s to embark on this journey with us.

“Ye Walks” focuses on Kanye West’s impact on the landscape of design and sports iconography. The NIKE AIR YEEZY 1 PROTOTYPE was the first sneaker West designed with Nike creative director Mark Smith and designer Tiffany Beers in the Nike Innovation Kitchen after two years of vigorous effort. The original Yeezy design features notable elements including Air Tech Challenge II with the midfoot strap along with the midsole tooling inspired by the Air Jordan 3.

Featuring a glow-in-the-dark outsole, a translucent red “Y” shaped lace lock, and soft premium leather material, this shoe’s design was the origin of the now common features of the Yeezy innovative look. Exemplifying premium quality and strong references to iconic models seen in popular collaborations, this model was the first of what would become a historic part of West’s design legacy.

Worn during West’s historic and emotional performance at the 50th Annual Grammy Awards, this pair was the first Air Yeezy 1 prototype seen in a public arena, a momentous moment for sneaker culture and the birth of West’s illustrious career as a designer and brand.

The NIKE DONDA WEST AIR JORDAN VI, was created in memory of West’s mother, Dr. Donda West. The classic silhouette features lyrics from West’s song “Roses” and is outfitted with his mother’s name on the sock liner. The toe box and upper panels are decorated with intricate lasered roses throughout. The heel and tongue are beautifully finished with embroidered roses. The Air Jordan VI was a favorite of West’s during this era of his career.

Donda Jordan VIs were never released for public sale. They were created for West and a few of his close friends and family. There are just four to six official pairs in existence, one of which Christie’s is proud to bring to market. 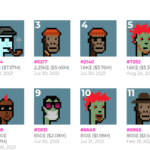