On Saturday, the V&A will open the landmark exhibition Hallyu! The Korean Wave – the first exhibition of its kind to celebrate the colourful and dynamic popular culture of South Korea, following its early origins to its place on the global stage today.

From K-pop costumes and a newly revealed interactive K-pop dance challenge to K-drama and cinema props and posters, alongside photography, sculpture, fashion, video and pop culture ephemera, the exhibition invites visitors to delve into the phenomenon known as ‘hallyu’ – meaning ‘Korean Wave’. Hallyu rose to prominence in the late 1990s, rippling across Asia before reaching all corners of the world and challenging the currents of global pop culture today.

Hallyu! The Korean Wave explores the makings of the Korean Wave through cinema, drama, music and fandoms, and underlines its cultural impact on the beauty and fashion industries. The exhibition features around 200 objects across four thematic sections – including some loans never seen in the UK before – alongside pop culture ephemera and digital displays.

Highlights include an immersive re-creation of Parasite’s bathroom set, and an array of iconic costumes and props seen in K-drama, film and music – including from hit Netflix series Squid Game, and outfits worn by different generations of K-pop idols, from PSY,to aespa and ATEEZ.

It also presents monumental artworks, including by Nam June Paik, Ham Kyungah and Gwon Osang; excerpts from well-known K-cinema, drama, and K-pop music videos; around 20 high fashion looks by Tchai Kim, Miss Sohee and Minju Kim among others; as well as early examples of advertising and branding, including an original poster from the Seoul Olympics, and the first Korean branded cosmetic from the 1910s.In the exhibition, hallyu will also be used as a gateway to explore traditional and contemporary Korean culture by connecting historic objects with popular culture and socio-political events.

A new highlight – revealed today – is an interactive K-pop dance challenge created in collaboration with Google Arts & Culture, inviting visitors to try their hand at K-pop choreography for PSY’s ‘That That’, co-written and co-produced with SUGA from BTS.

South Korea has captivated the world over with hallyu, its vibrant and creative popular culture, which has transformed the country’s image from one devastated by the Korean War to that of a leading cultural powerhouse in the era of social media and digital culture today. This phenomenon has been amplified by tech-savvy and socially conscious global fanbases, further raising the profile and relevance of hallyu around the world, and we’re delighted to be bringing its energy and dynamism to the V&A this autumn in the first exhibition of its kind.

The exhibition opens with a familiar example of hallyu: PSY’s viral 2012 hit single ‘Gangnam Style’, with his iconic pink suit jacket on display. The song and its quirky dance moves were an overnight sensation, and it became the first music video to reach 1 billion views on YouTube. The hugely successful video was an early reflection of hallyu’s international appeal that went on to launch a global phenomenon, inspiring parodies and cover versions across the world, several examples of which, filmed across multiple continents, also feature in this introduction.

Section one, ‘From Rubble to Smartphones’, provides historical context to the meteoric rise of hallyu, highlighting how – within living memory – South Korea rapidly evolved from a country ravaged by war in the late 1950s to a leading cultural powerhouse by the early 2000s. Korea’s 20th-century history is marked by the Japanese colonial occupation, the territorial division that led to the Korean War, and the subsequent 27 years of military rule. In the 1960s and 70s South Korea experienced rapid industrialisation and economic growth, and the country was propelled onto the international stage in 1988 with the Seoul Summer Olympics, changing Korea’s image overseas for the first time. Despite the 1997 Asian Financial Crisis, bold strategies and IT innovations turned South Korea into one of the most digitally connected countries in the world by the late 90s. Korea’s modern history is represented and explored in the exhibition through photography, posters and archive materials, alongside objects ranging from Olympics posters to early examples of electronics – including the world’s first commercial MP3 player – and a monumental 1986 video sculpture by artist Nam June Paik, featuring 33 TV monitors.

Section two – ‘Spotlighting K-drama and Cinema’ –focuses on the remarkable success of K-drama and film, charting in turn their rise in popularity from the late 1990s to the present day, through multimedia, installations, posters, props and costumes. Highlights in this section include the iconic pink guard costumes and green tracksuit from hit Netflix series Squid Game, and a recreation of the bathroom set from Bong Joon-Ho’s Oscar-winning film Parasite. This is the first time the bathroom in the Kim family’s banjiha – or semi-basement apartment – has been re-created, under the guidance of its acclaimed Production Designer Lee Ha Jun. Traditional Korean costumes and props are also on display, including hats seen in Joseon-era zombie series Kingdom, and the grooming kit from The Handmaiden. Finally, this section showcases webtoons, a Korean innovation of digital cartoons designed for mobile devices, as a source of inspiration for many K-dramas. It explores recurring themes in TV series, mixing genres and local narratives, such as the country’s relationship with North Korea as depicted on screen.

‘Sounding K-pop and Fandoms’, the third section, delves into the explosion of K-pop music around the world, as well as underlining the crucial roles social media and fandoms play in increasing their reach. Visitors enter the gallery through a corridor lined by fan lightsticks, then are greeted by posters, ephemera and album covers from early K-pop bands like Seo Taiji and Boys and BoA, before progressing through to explore the concept of ‘Idols’ in K-pop. This immersive room hosts music video excerpts by the likes of BIGBANG, NCT and BLACKPINK, surrounded by artworks, ephemera and costumes. Highlights include a monumental three-metre-high sculpture of G-Dragon by Gwon Osang, whilst costumes on display include aespa’s original iridescent outfits from the music video ‘Next Level’, and British punk fashion-inspired ensembles worn by four members of ATEEZ in the music video ‘Fireworks’. The V&A has also worked with celebrated K-pop Style and Visual Director Gee Eun, who has styled idols like BLACKPINK and BIGBANG,and Style Director Balko, who has worked with BTS and NCT,to display two ‘Idol’ looks each. A highlight in the ‘Sounding K-pop and Fandoms’ section is an interactive K-pop dance challenge, which invites visitors to try their hand at the dance moves for PSY’s ‘That That’, co-written and co-produced with SUGA from BTS, with choreography by B.B Trippin. The challenge was created in collaboration with Google Arts & Culture Lab, with visitors’ renditions becoming part of an evolving collective dance displayed in the space. Finally, the section also explores the hugely important role that K-pop fandoms play in popularising and spreading K-pop around the world, and suspended from the ceiling are a selection of K-pop banners acquired for the museum as part of a public call-out for submissions.

The final section in Hallyu!, titled ‘Making K-beauty and Fashion’, presents K-beauty and fashion, underlining their origin whilst showcasing their innovative and experimental approach that led to new aesthetic standards both inside and outside of Korea. It also highlights how product placement in K-dramas and endorsements from K-pop idols have amplified the international profile of K-beauty and fashion. Featuring cosmetics packaging from the 13th century to the present day, the exhibition traces packaging’s design evolution, from ornate porcelain pots to items including face mask wrappings boasting idols as superheroes.

Hallyu! concludes with K-fashion, showcasing over 20 looks by contemporary hanbok and fashion designers from Korea and the Korean diaspora. Whilst K-fashion is often characterised by its fun, fast-moving streetstyle and gender-fluid outfits as illustrated by Kye, D-Antidote and Blindness, other designers are reimagining the silhouette of hanbok, the national costume of Korea. On display is a look specially created for the V&A by acclaimed stylist Suh Younghee, alongside a K-pop hanbok by C-ZANN E, a pink jacket by Danha, and a purple cheollik dress by Tchai Kim,drawing their inspiration from traditional garments and patterns. The section also features hanbok-inspired daily wear designed for and by a younger generation, including looks by Ji Won Choi, Darcycom,and a contemporary hanbok overcoat by Baek Oak Soo,worn by RM from BTS in 2018.  The final display of the exhibition is dedicated to contemporary Korean fashion designers creating colourful, showstopping garments, including looks by Minju Kim, Münn,and Miss Sohee. 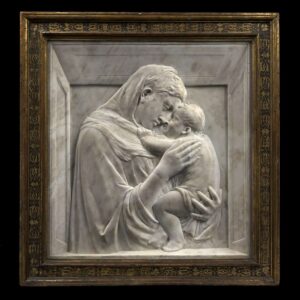 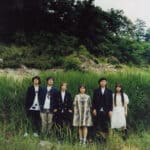 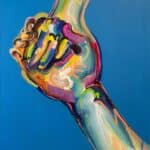