Hayden Dunham is an interdisciplinary artist whose sprawling assemblages move from organic to synthetic. Tracking energy through different states of materiality, Dunham investigates a human relationship to systems that both embrace and neutralize environmental toxicity. For her second solo exhibition at Company Gallery, Dunham presents an immersive installation of living sculptures which she describes as a “tool kit for a new world”.

Since 2018, Dunham has been working on building a water sanctuary alongside a volcanic strand of 160 degree mineral rich hot spring water in Southern California. Dunham comes to this interest in water as both alchemist and artist, considering how her work can conceptually, metaphysically and literally uncover hidden material principles. The works on view support water in its four phases – liquid, solid, vapor and semi-liquid. This last phase has only recently been put forth by a group of scientists and the material itself exists in a perpetual state of in-between – not quite solid and not yet liquid. Continuing this research, Dunham has created a new material called H+ which is featured in many of the pieces on view and changes forms through the duration of the exhibition. Like lines in a poem or lyrics in a song, Dunham’s materials fall into place as a mutable arrangement.

Installed in the center of the gallery, suspended silicone holds this milky gel-like fluid; a small opening allows H+ to drip down, creating a reflective pool. On the back wall, a large swirling slide emits a vapor and fills the floor with a misting cloud. And glass “swords” filled with the semi-liquid H+, pearls, metal, and other charged elements hang on the wall. Padding the space is a sound piece made by Dunham and composer Finn Keane. This soundscape connects directly to Dunham’s musical practice in which she performs under the name HYD, whose new album, CLEARING, is being released simultaneously with the exhibition. Activating all of our senses, we become submerged within what Dunham labels as a rupture of reality. A meditation on ideas of integration, expansiveness and transformation, the exhibition offers a glimpse beyond what is physically possible. 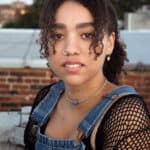