Cartier is supporting a range of initiatives to help preserve the living heritage of the city of Venice and contribute to the continuous development of its cultural life, underscoring its partnership with the Venice International Film Festival.

Venice is celebrated as a heritage site of global importance, not least because of the extraordinary history and quality of its arts landscape. The Maison is supporting the restoration and renovation of two iconic Venice venues, the Teatro Verde and Conservatorio Di Musica Benedetto Marcello.

Built between 1953 and 1954 by Luigi Vietti, Teatro Verde is a stunning amphitheatre located on the island of San Giorgio. Concealed by trees and with a spectacular backdrop to the sea, the theatre has not been in constant use, but has hosted some of the most important plays, concerts, operas and dance performances of Venice’s cultural programme over the years.

Cartier’s contribution has enabled The Fondazione Giorgio Cini to consolidate the amphitheatre’s structure and restore the Istrian stone seats and boxwood hedges that form the backs of the seating sections, the cavea.

The Maison is also supporting the Conservatorio Di Musica Benedetto Marcello, in the magnificent setting of the early 17th Century Palazzo Pisani a Santo Stefano, to renovate one of its rehearsal rooms. Cartier’s support will enable the Conservatorio to dramatically improve the acoustics of the space. Key interventions will include lining the room with valuable fabric provided by Venetian artisans and the application of wooden panelling. As part of the renovation work, a new LED lighting system will be installed, showcasing its stunning frescoed ceiling.

As part of Cartier’s commitment to preserving and safeguarding Venice’s artistic traditions, the Maison is also collaborating with Orsoni Venezia 1888, the last remaining furnace allowed to operate with fire in Venice, with the creation of La Scola, a new centre of excellence and training that will continue the development of the ancient craft of Venetian smalti and 24 K gold leaf mosaics production. La Scola will enable Orsoni Venezia 1888, part of TREND Group, a global manufacturer of glass mosaics and engineered stone surfaces based in Italy, to support the Venetian artisan tradition through activities including mosaic workshops, thematic courses and artist residences.

The Maison is main sponsor of the 79th Venice International Film Festival, having first partnered with La Biennale di Venezia in 2021 to jointly support contemporary filmmaking and to celebrate creativity and talent.

As part of this collaboration, Venice International Film Festival and Cartier pay tribute to outstanding filmmakers with the Cartier Glory to the Filmmaker Award, now in its second year, dedicated to a personality that has made an original contribution to the contemporary film industry. This year, the award will go to the American filmmaker Walter Hill. The ceremony will be followed by the premiere screening of Dead for a dollar. For the 79th Venice International Film Festival, Cartier is enriching its collaboration with a special programme that will continue to evolve over future editions. This year, the Maison will host its popular Cartier Art Dialogues series in the format of masterclasses with major film music composers and musicians. The Composing for Cinema masterclasses, held at Palazzo del Casino on Venice Lido, in the heart of the film festival, will offer an in-depth insight into the particular alchemy between sound and image, and shed light on the musical creation process of films.

Enriching the beauty of the world is one of Cartier’s driving principles. Venice is a uniquely beautiful city which continues to attract and inspire. Thanks to La Biennale di Venezia and the Venice International Film Festival, the city continues to play an important cultural role. It is an honour for our Maison to contribute to it, working with contemporary makers, inviting actors and actresses as well as musicians to share their creative paths in our Cartier Art Dialogues. We remain committed to serving love and beauty endlessly.

To celebrate its historic connections to cinema, Cartier is curating a special display of some of its iconic pieces that have shone on the big screen or been worn off-screen by leading film stars, and now form part of the Cartier Collection.

The exhibition includes such pieces as Grace Kelly’s engagement ring, which she also wore in her last film, High Society (1956); a dazzling bracelet worn by Gloria Swanson in Perfect Understanding (1950) and Sunset Boulevard (1950), crocodile necklace made as a special order for María Félix, Toussaint necklace replica made for the film “Ocean’s 8”, as well as pieces worn by Josette Day, Simone Signoret and Catherine Deneuve. 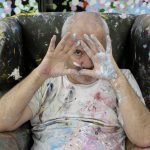 “The Cherry Blossoms are about beauty and life and death. They’re extreme—there’s something almosttacky about them. […] They’re decorative but […] 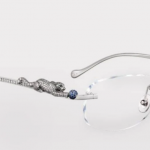 The Most Expensive Glasses In the World Despite the COVID-19 virus Damien Hirst is still scheduled to exhibit his latest paintings, ‘Cherry Blossoms’, at Fondation Cartier in Paris. The solo exhibition will run from June to November 2020. The Cartier Foundation for Contemporary art will present the first major European exhibition dedicated to the Chinese artist Yue Minjun.