Award-winning multi-disciplinary artist Ray Young has today launched their groundbreaking commissioned work BODIES, and newly relaunched work THIRST TRAP. These are companion pieces that act as expansive art installations that explore our human, bodily and sensory connection with water, juxtaposed with the ongoing climate emergency and neurodiversity. BODIES has been commissioned by Unlimited and will tour across the UK, premiering at the Unlimited festival at the Southbank Centre on 8th September, along with its sister project THIRST TRAP.

BODIES is a sound and performance installation that will take place in swimming pools across the UK, and THIRST TRAP is part-narrative and part-meditation, a 30 min sound piece for audiences to listen to in the bath. Audiences are invited into the indoor pool for an active, sensory experience of water, discovery and rest. This immersive water, light and soundscape environment investigates the embodied experiences of our relationships with water. BODIES will continue Ray Young’s investigation into water as a key character in our collective conversations on climate justice.

A sister piece to BODIES, THIRST TRAP invites audiences to experience a sensory soundscape from their own bathtub. Audiences receive an experience pack of resources to change their physical environment, connecting closely with their personal atmosphere and relationship with their bodies.

THIRST TRAP delves into the possible outcomes of rising temperatures and the correlation between social and climate justice. THIRST TRAP continues Young’s investigation into our relationship with water as a key character in our collective conversations on climate justice, and the dichotomy of water’s elemental power to create and destroy, and man’s ability to do the same.

Having recently received an ADD diagnosis, it felt important for me to consider this as I returned back to work. Having spent many years masking or just feeling less-than. So over the past year alongside my team who have various neurodiversities, we have put systems in place to decenter neurotypical working practices and celebrate and accommodate our differences. BODIES felt like an opportunity to carry the process into my practice, creating a work that holds the complexities of difference at its core to create a sensory embodied experience.

I’ve often felt that the climate conversations exclude global majority voices, which feels strange to me as it is often these communities in the global south who are most affected by the actions of those living in the global south. For me climate justice and social justice are one and the same, we can not achieve one without the other, so without the inclusion of those who have a lived experience of social injustice change feels a long way off. BODIES offers an opportunity for reflection, both a mental and physical level

Dionne Brand, An Ars Poetica from The Blue Clerk

Ray Young is an award-winning artist and writer based between Nottingham and London. Their transdisciplinary practice exists on the boundaries of live art, text, movement, activism and neurodiversity. Their work provides a shelter from which to explore the multiplicities of their lived experience. They use their evolving practice to hold space for those at the intersection of multiple realities championing and centring alternative narratives and forms.

Ray is a recipient of the Jerwood Live Work Fund and was the inaugural winner of the Eclipse Award, which supported Edinburgh Fringe 2019 runs of NIGHTCLUBBING and OUT, where both shows were nominated for Total Theatre awards, and Ray was named the British Council’s Artist to Watch. Ray is Associate Artist with Something to Aim For.

Unlimited is an arts commissioning body that supports, funds and promotes new work by disabled artists for UK and international audiences. Our mission is to commission extraordinary work from disabled artists that will change and challenge the world. Funded by Arts Council England, Creative Scotland, Arts Council of Wales, Paul Hamlyn Foundation and British Council, since 2013, Unlimited has supported over 460 artists with over £4.9 million reaching audiences of over 5 million making it the largest supporter of disabled artists world-wide. weareunlimited.org.uk 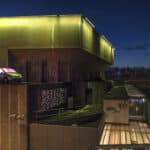