Six of Daniel Arsham’s bronze sculptures will be shown outdoors in the 18th-century Formal Garden at YSP including Bronze Extraterrestrial Bicycle (2022), Bronze Eroded Bunny (Large) (2022), and the three-metre tall Bronze Eroded Venus of Arles (Large) (2022) – Arsham’s retelling of the ancient marble statue of Aphrodite from the 1st century BCE.

As history progresses, all objects become antiquated and in some way, they all become ruins or relics, disused or buried. In 1000 years everything that we own will inevitably become one of those things. I don’t particularly see that as having an apocalyptic quality – it’s sort of just the march of time moving on.

Arsham’s sculptures appear as archaeological remnants of our time that he describes as ‘future relics’.
His artistic practice is underpinned by the formative childhood experience of surviving Hurricane Andrew,
which struck the Southern United States in 1992 and destroyed his family home and everything around
it. Reflecting this, Arsham’s works are partially decayed and explore regeneration represented by real
crystals that have been cast in bronze. The inclusion of the crystal forms alludes to alchemical change (the transformation of one substance into another), growth, and progression. A visit to Easter Island in 2011 where he encountered a palaeontology research expedition deepened Arsham’s interest in archaeology and continues to inform his practice.

The artist was recently given access to the original foundry molds of some of France’s most iconic classical sculptures displayed in the Louvre, including a 3.9-metre-tall female figure that was carved around 50 BCE. The statue was unearthed in the 15th century and for the last 500 or so years, she has been thought of as Melpomene, the Greek muse of tragedy. From the mold of this sculpture, Arsham created Unearthed Bronze Eroded Melpomene (2021), which in this landscape connects the past with the present. The ground in which YSP stands has been inhabited since at least the 11th century; here, Arsham’s sculptures resonate with the layers of human activity that have shaped and will continue to shape the environment.

Alongside sculptures drawn from antiquity are works that use imagery from recent history and pop culture. Bronze Eroded Astronaut (2022) takes as its starting point the famous image of Neil Armstrong during the Apollo 11 Moonwalk in 1969. The image became an icon of innovation and the ambition of humans to explore worlds outside of our own. Bronze Crystallized Seated Pikachu (2022) is a recognisable cartoon character from the Pokémon world, which was created in Japan in the mid-1990s and became a global phenomenon Created using traditional green patinated bronze, these modern-day images are reinvented to become artefacts that tell the stories of our time.

I first visited Yorkshire Sculpture Park a couple of years ago and was struck by the way sculptures would connect with the landscape there: the rolling hills, the changing seasons and the interaction of the work with the natural light, lakes and surroundings. I immediately started thinking about a project I could embark on in the landscape that would allow my work to take advantage of the unique context presented there. The works I’m showing vary in scale, some are presented in an open garden and others are concealed or hidden within woodland, for viewers to discover.

Born in Cleveland and raised in Miami, in 1999, Arsham attended the Cooper Union in New York where he
received the Gelman Trust Fellowship Award in 2003. In 2009, Arsham began his career in stage design with Merce Cunningham. This experience led to an interest in crossing and shifting boundaries between fine art, architecture, design, film, and performance. Arsham’s iconic works meld the past, present and future, showcasing the malleability and power of nostalgia, often through referencing moments of the late 20th century. His works provide an experience for viewers to simultaneously remember and question the pace of lived time. Much of Arsham’s practice revolves around collaboration and altering worlds, and in turn, fusing them together. His collaborative practice includes working alongside renowned artists, musicians, designers and brands such as Pharrell, Nas, Porsche, Adidas, Dior, Tiffany & Co., Rimowa. and more. Arsham is the creative director of the Cleveland Cavaliers, becoming the first-ever fine artist to hold this role. His works have been shown at PS1 and The New Museum, New York; Musée Guimet, Paris; The Museum of Contemporary Art, Miami; The Athens Biennale, Greece; UCCA Center for Contemporary Art, Dune, China; Contemporary Arts Center, Cincinnati; SCAD Museum of GA, California; Parco Museum, Tokyo; Carré d’Art, Nimes; HOW Musuem, Shanghai; and the High Museum of Art, Atlanta, among others. Arsham is represented by Perrotin gallery in Paris, Hong Kong, New York, Seoul, Shanghai, Dubai and Tokyo. Arsham also shows with Baró Galeria, Sao Paulo and Madrid; Friedman Benda, New York and Los Angeles; Library Street Collective, Detroit; König Galerie, Berlin, Vienna and London; Ron Mandos, Amsterdam; Nanzuka Gallery, Tokyo. @danielarsham 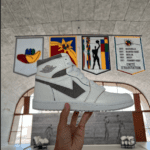