In celebration of its 180-year anniversary, Fabergé has introduced a new capsule collection, set to be embraced by modern-day collectors and enthusiasts. 180 limited-edition egg objets and a new fluted egg pendant, with each piece crafted from 18k rose gold and featuring responsibly sourced Gemfields Mozambican rubies.

The 180-year capsule collection takes its inspiration from ‘fluted’ gold creations in the Fabergé archive, a technique for which Peter Carl Fabergé was renowned and featured heavily in his early works of art.

The Limited-Edition Rose Gold & Ruby Mini Fluted ‘180’ Egg Objet fits in the palm of your hand – a miniature masterpiece, with a height of 62mm and a diameter of just 35mm. The artful fluting brings out the natural beauty of the 18k rose gold, by creating curved surfaces and mixed levels that create contrasting light and shadow. Gemfields Mozambican rubies add a pop of colour, with two cabochon rubies set to each side, and a delicate row of smaller Gemfields rubies adds subtle texture and sparkle to the piece. Only 180 numbered pieces will be created.

The Colours of Love Rose Gold Diamond & Ruby ‘180’ Fluted Egg Pendant perfectly complements the egg objet, with uniform vertical fluting around the egg’s circumference, to create a tactile surface. A Gemfields Mozambican ruby sits on the base of the egg, radiating a pop of colour when worn and a row of white diamonds is set on the bail for added sparkle. 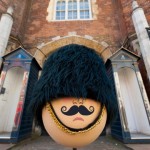 From Tuesday 21st February, the UK’s capital will become home to 200 giant and uniquely crafted Easter eggs for ‘The Fabergé Big Egg Hunt.