Mazzoleni has announced the multi-site exhibition MARINELLA SENATORE. Afterglow, taking place from 9th June to 26th August 2022 at the London gallery at 15 Old Bond Street and at selected sites across the city, including the Battersea Power Station, the SIAL School and the Association of Ukrainians in Great Britain in Holland Park, and the Petersham Nurseries in Covent Garden.

The artworks will be ‘activated’ by Senatore and a series of free and open to all ‘public actions’ involving over 200 performers, such as music bands, choirs, dancers, poets and athletes, taking place at Battersea Power Station on Thursday 9th June from 6-8pm.

Afterglow will not only present a new body of sculptures and drawings at the London gallery but also activate the city across different outdoor light installations and performances. The multi-site nature of Afterglow exemplifies Senatore’s multidisciplinary and participatory practice, which is characterised by a strong collective dimension. Taking her inspiration from Southern Italy’s luminarie, the elaborate light structures that traditionally adorn cities and re-create cathedrals, piazzas, and other architectural elements for outdoor public celebrations and religious festivities, the artist will insert her own site specific light sculptures on the facades and forecourts of significant buildings across London.

“are like monuments to and for people, to the ‘here and now’, to live actions and experiences.”

Light is another crucial aspect to Afterglow. Light has been a fundamental element in Senatore’s practice since her training at the National Film School in Rome, where she studied direction of photography and camera. The light, both electric and optic, material and metaphorical, proves to be a tool for narration and poetic creation, as well as for resistance and cohesion.

As the artist explains,

“the light sculptures are generators of energy that – under the form of light beams – is propagated across a space, that changes it and modifies its structures as well as the individuals in it.”

On Wednesday 8th June, the Embassy of Italy in London will host a presentation of the project with a conversation with the artist and the display of two new light sculptures. On Thursday 9th June, the selected locations will be linked by a bus journey involving folk and opera singers and musicians, as well as collectors, curators, and journalists (defined by the artist as “storytellers”) who have previously been involved with The School of Narrative Dance (SOND), Senatore’s renowned participatory project that counts a network of over 6.5 million participants across 23 countries. SOND is a free of charge, nomadic school, focused on exploring new ideas of community, empowerment, and emancipation through different disciplines, such as music, dance, and spoken words. The bus will stop at selected locations to “activate” the public installations with a series of participatory performances involving local residents across London’s diverse communities.

The outdoor light sculptures include: Bodies in Alliance (2021) on the facade of the building hosting the Association of Ukrainians in Great Britain and the SIAL (International Italian School in London), where the school’s choir will participate in a singing recital; and Assembly (2021), a work comprising two monumental outdoor light installations, positioned in front of the Grade II* listed Power Station, in the newly opened six-acre park facing the iconic Battersea Power Station, a space that “naturally” gather communities and has hosted Senatore’s projects previously in 2018 within the framework of Art Night London: a network of participants again reunited on the occasion of this celebration.

The main performance, taking place at Battersea Power Station, will be a series of ‘public actions’ revealing SOND’s ‘linguistic dissonances’: a short circuit between a variety of languages and disciplines that release communal energy. Each performer shares core values with Senatore as well as personal, biographical connections. Senatore affirms: “the social change happens thanks to the transformative power of collective experiences. The ‘personal flourishing’ always happens within the collective context, which is my idea of an active and transformative community.”

These collective actions will involve different types of music bands, such as the South-London based “Melodians Steel Orchestra UK”, who will perform a specially commissioned up-tempo version of David Bowie’s “Life on Mars” for the first time; dancers, including “Pointe Black”, a Black-owned ballet school that aims at an inclusive access to ballet in tune with concepts relating to the ‘decolonisation of the body, and the “London Contact Improvisation”, a group of contact dancers, especially relevant after two years of social distancing; choirs, such as a gospel choir as well as members from the “Goldsmiths Choral Union”, the biggest amateur choir in England; a soprano singer who will perform a piece by Schubert, which represents a key moment in Senatore’s life when she created her first artwork; a group of body percussionists who work with seniors, reflecting on mindful movements, the social space and the meaning of the old body in society; and the “Esprit Concrete” parkour group, which has been collaborating with Senatore for a long time and combines l’Art Du Déplacement with counselling psychology principles and therapeutic interventions, amongst others.

Afterglow is inscribed in the celebrations for the 10th anniversary of SOND along with a broad series of exhibitions and events by Senatore scheduled for 2022 at major institutions, including the solo show art meets city in Baden-Baden between 15th July and 4th September. From 15th September 2022, Marinella Senatore will also present a series of performances, workshops, and displays at the Palais de Tokyo in Paris.

Whereas the outdoor light sculptures exemplify Senatore’s commitment to the transformative power of social engagement and community activation, the exhibition at the gallery captures a more personal and immersive experience. In an intimate “glowing in the dark” atmosphere – reminiscent of Fabio Mauri’s Moon environment – the show brings together several previously unseen neon sculptures, light sculptures, and installations, which have been produced using a mercury-free technology. As a socially engaged activist, sustainability is crucial to Senatore, who has been committed to lowering the carbon-print of her practice for the last few years.

The wall-mounted light sculptures featured in the show include messages of empowerment, such as Dance First Think Later, a quote by Samuel Beckett. The display also presents the newest glass sculptures in lost-wax casting glass: I Contain Multitudes, quoting Walt Whitman, and Autoritratto (Self-Portrait), featuring the artist’s life-size casted hands, an iconographic element that often returns in the artist’s work.

Collages and drawings – emerging from various contexts such as learning theatre, oral histories, vernacular forms, protest dance and music, public ceremonies, civil rituals, and mass events – will also be part of the exhibition. Through her participatory practice, Marinella Senatore questions the bio-politics of different communities and circumvents the traditional roles of artist and audience, extending the idea of “assembly”, “community”, and “rituals.” For example, It’s Time to Go Back to the Street is a continual series of drawings that explore the multifaceted forms and rich legacies of protests in different countries, while also engaging with ecologies of affiliation, affection, empowerment, and belonging.

Bad news: things may change fairly soon, but it’s not a simple matter to get to Venice at the moment. […] 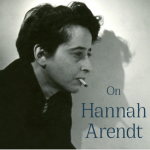 Launching in January 2021, On Hannah Arendt will be organised around eight exhibitions that seek to explore the questions put forth in the eight chapters of Arendt’s book Between Past and Future: Eight Exercises in Political Thought featuring over 20 international artists.