The word ‘Love’ spelled out in big chunky red and blue letters in a 2×2 formation so the L and O rest on top of the V and E. It’s a striking work that’s instantly recognisable, by both those who know of artist Robert Indiana and even by many who have never heard of him.

It’s often used as a selfie backdrop in a public square due to its simple and uplifting message but the major exhibition of his work at Yorkshire Sculpture Park is about shining a light on his wider work and showing us that while ‘love’ was a central theme there’s a lot more to the artist than one word.

Indiana said ‘we are immersed in numbers from the moment we’re born’, starting from date of birth right through every year until we die. His large scale numeric sequence from 1 to 0 stands guard outside his show and he saw them as markers for life with 1 being birth and 4 as the number he didn’t like as for him it represented adolescence.

While there’s a universality to his work in that it applies to everyone, they are also deeply personal to him as he remembers all the numbers on signs on the many road trips he took. It’s this personal element that is the highlight of this show as we learn about his difficult childhood and how he changed his name to his home state of Indiana.

The surprising works are located indoors where his columns and herms stand up as totemic pieces made of wood and bronze and it’s challenging to guess what they’re made of as some of the bronze casts are strikingly wood-like. They include references to the book Moby Dick with ‘call me Ishmael’ on one and I found out that Indiana was a Royalist with a King and Queen column standing side by side representing the British monarchy.

The words die, eat, hug and err are in lights and attached to these is another personal story as eat was the last words Indiana’s mother said to him before she died asking if he had had something to eat — something almost everyone has been asked by their own mums. Not every work resonated with me but they all add colour to understanding who Robert Indiana was.

As well as showing us the diversity of Indiana’s work this show really brings out personal elements of his life so we get to see a rounded picture of the artist alongside his more recognisable works.

Robert Indiana: Sculpture 1958-2018 is on at Yorkshire Sculpture Park from 12th March until 8th January. The venue is also showing drawings by David Nash until 5 June, and the works of Rachel Kneebone and Damien Hirst which was covered in a previous review. 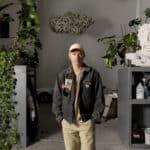