UTOPIA explores imagery of mysticism as a vehicle for understanding the complexity and ambiguity of contemporary life and our unstable realities. - FAD Magazine
Skip to content

This exhibition explores imagery of mysticism as a vehicle for understanding the complexity and ambiguity of contemporary life and our unstable realities. While the title of the exhibition makes reference to Thomas More’s 16th century book, De optimo reipublicae statu deque nova insula Utopia, the works also consider the Greek origins of the word Utopia – “ou” meaning “not” and “topos” meaning place or nowhere.

An earlier title of More’s satire was “A little, true book, not less beneficial than enjoyable, about how things should be in a state and about the new island Utopia”. This emphasis on the affective experience of the text (as enjoyable), is taken up by the exhibition, which focuses on mysticism as an altered state of insight and transformation.

Works by von Zeipel, Huanca, Jiménez and Grafia encourage embodied responses, inducing mystic inner experiences These artists approach mysticism as speculative systems, with a set of ideals and spiritual connections rather than narrative approaches. The sensorial and emotional properties of these works examine capacities for self-creation and reinvention.

World building as a function of mysticism is also a motif that runs through the works included in Utopia. The imagery in Blissett, Gerdes, Li and Wang’s works probe the boundaries of their surroundings as a means for understanding and creating environments. These visions of the world emphasize affective atmospheres, referencing the nowhere that is inherent to utopia. Mysticism is shared by many traditions and religions, which demonstrates its endurance. These works which span painting, video and sculpture consider the influence that mysticism holds over truth. The artists participating in the exhibition explore these properties and interpret them in their own alternate ecologies and queer futures.

About the artists
Sholto Blissett (b. 1996 in Salisbury, UK) lives and works in London. He read Geography at the University of Durham before undertaking an MA in painting at the Royal College of Art, London. Recent exhibitions include Nicola Vassell Gallery, New York, White Cube, London, Unit London, London and Saatchi Gallery, London.

Harm Gerdes (b. 1994 in Darmstadt, DE) lives and works between Dusseldorf and Darmstadt. In 2020, he graduated from the Düsseldorf Kunstakademie. Gerdes’ paintings are abstract studies of color, composition and materiality. Viewed from a distance or digitally, they appear almost like exports from the latest, super high bit video games. He recently had his first solo exhibition at Peres Projects.

Donna Huanca (b. 1980 in Chicago, US) studied at Städelschule, Frankfurt and was the recipient of the DAAD Artist Frankfurt and a Fulbright research grant. Recent solo exhibitions include OBSIDIAN LADDER, curated by Olivia Marciano at the Marciano Foundation, Los Angeles, LENGUA LLORONA, curated by Aukje Lepoutre Ravn at Copenhagen Contemporary, Copenhagen, PIEDRA QUEMADA, curated by Stella Rollig at the Belvedere Museum, Vienna, the Yuz Museum, Shanghai and Peres Projects, Berlin.

Bayrol Jiménez (b. 1984 in Oaxaca, MX) lives and works in Oaxaca. He studied at the National School of Painting, Sculpture and Engraving, La Esmeralda, and at the Villa Arson National Superior School of Art in Nice, France. Recent solo exhibitions include Páramo, Guadalajara, 14a, Hamburg, Metro Northshields, Newcastle and Dukan Gallery, Leipzig. He has also participated in group exhibitions at the Foundry Darling, Montreal, Museo de Arte Carrillo, Mexico City, SeMA Nanji, Seoul and National Gallery of Canada, Ottawa.

Ziping Wang (b. 1995 in Shenyang, CN) lives and works in Shenyang. She holds an MFA from the Pratt Institute, New York and a BFA from the Rhode Island School of Design. Recent solo exhibitions include Unit London, London, WT Foundation, Kyiv, Galerie Marguo, Paris and Gessoisland Artspace, Shenyang. She has also participated in group exhibitions at Yinchuan Museum of Contemporary Art, Yinchuan and Phillips, Hong Kong. 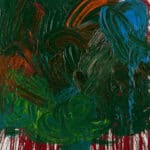 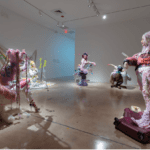 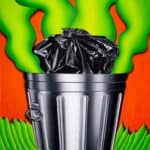 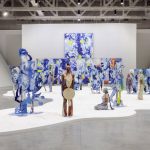