The exhibition title “M is for Madonna, M is for Mariah, M is for Mother” makes it perfectly clear how significant female pop stars are for Nielsen. But there is another dimension to the sequence in the title when read as a reference to female saint figures associated with Catholicism. As a child, Nielsen, who was raised as a Roman Catholic, was particularly fascinated by the supernatural and magical abilities that the saints in the Bible possess. It is the ritualistic aspects of Catholicism and not religion per se that Nielsen is interested in. The duality of suffering and redemption that defines Catholicism, however, can also be found in some of her paintings: The “sacred heart” for example, one of the pivotal symbols of the Catholic Church, representing Christ’s love for humankind that he showed through his suffering on the cross, is a motif Nielsen has been dealing with for a long time and which already appeared in her early works. In her recent paintings, a heart is divided, a toadstool is broken apart in the middle, and a human heart sizzles in the focussed sunlight under a magnifying glass. Somewhere else, two capybaras in love find each other under a rainbow. In “Hey Britney (you say you wanna lose control)” the spheres of star cult and hagiolatry overlap. While the writing declares confidently “We can do hard things”, the nimbus of the Madonna is pierced by knives, and her tears deprive the sentence of its impact.

India Nielsen sees her paintings as vessels in which her inner life, her memories, feelings, and projections can be inscribed and unfold. In her sleep, the artist often experiences intense dreams that subsequently enter the fantastic worlds of her paintings. She develops an intimate relationship with the characters she creates with brush and paint, which is comparable to the idolisation that adolescent India felt for Mariah Carey, Britney Spears, or the members of the Wu-Tang Clan – and whose activities she followed on the Internet and MTV (Music Television). Beneath the colourful, playful surface that her paintings have at first glance, Nielsen is concerned with balance, with equilibrium. The balance between intimacy and distance, in India Nielsen’s case particularly between the very personal on one hand, and the templates, taken from the cold digital world on the other, is for her also a quest for balance between the subjective and the universal. Thus, she creates an independent visual language in her paintings that was highly shaped by personal experience, but which is easily comprehensible in individual parts, as these have become part of the recent pop-cultural memory. Words by Juergen Dehm

INDIA NIELSEN M is for Madonna, M is for Mariah, M is for Mother – 20th NOVEMBER 2021 at Darren Flook darrenflook.com 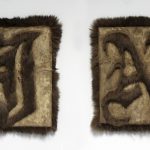 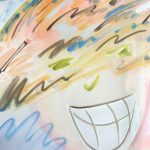 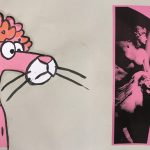 The Pink Panther Show organised by Vanessa Murrell, Martin Mayorga, and Evangeline Ling. The pop up group exhibition presents 16 emerging and mid-career artists, each of whom have created a work specifically for the show.