Created within the socio-political cul de sac that is post-Brexit Britain, Pigeon Park pokes fun at the inherited hierarchies of the old order and asks the question of the role and relevance of art as a luxurious commodity in times of social prohibition and uncertainty. As we emerged from lockdown life, creatives were under increasing pressure from art institutions and the government alike to accept a future of online viewing rooms and quit our hobbies to get a real job, which got us thinking? Art is a  non-vicarious experience which you should see, smell and taste. Don’t let the economists use a pandemic to dilute, cleanse and commodify your culture into profit. Found nestling within the cavernous former Victorian baths of Walworth, the exhibition will transform the building into an immersive space that invites human presence, participation and play, by using aesthetics of excess, mischief, self-deprecating humour and the peculiar.

Pigeon Park is a London based curatorial collective created by Stephen Burke, Jo  Dennis and Christopher Stead to breathe new life and vitality into the art world by claiming our own space that provides a thread between generations and dissolves the old hegemonic order. Created within a post-pandemic cultural vacuum, our hustle is to produce the kind of shows we want to be a part of, as both viewer and participant, that aren’t subjected to the Mayfair rules of currency and obedience.  This leads us on to ask, are you the statue or are you the pigeon?

The exhibition takes place in the Grade II listed Manor Place Baths, located just off Walworth Road, where Kennington and Elephant & Castle meet. The 800 square metre building comes with a rich history of serving the people of its community.  Built in the late 19th Century, its original purpose was to provide a place for the families of Newington to wash their bodies and clothes once a week, at a time when the borough had no public sanitation. In the 20th Century, it became a famous boxing gym to the likes of the Kray twins and Henry Cooper, later becoming the BBC’s international boxing venue until its closure in 1978. After some years dormant, it reopened as a recycling centre, whilst the front of the building was transformed into a Buddhist retreat.

In 2021, under the guidance of This Is Projekt it operates as a film location, studio and exhibition space providing the artist’s space and freedom not usually offered outside of the institutional context.

The show is generously supported by This is Projekt, Creative Scotland and  Jagermeister. 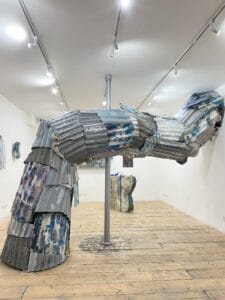