Avant Arte has announced a debut collaboration with Swedish duo Nathalie Djurberg & Hans Berg. The Advantage, a series of 25 unique sculptures, will be launched on Tuesday 21st September 2021.

The Advantage — a series of 25 toned resin sculptures, each finished with a unique handmade hairpiece — touches on recurring themes from Djurberg and Berg’s artistic practice: metamorphosis, guilt and deceit. Treacherous yet disarmingly hopeful, the crocodile pursues an upper hand with a wig as its accessory-of-choice. In the artists’ words, the series “takes something considered ugly and adds something more, which turns out not beautiful either, and then finds the beauty (and sweetness) in the innocence of that act.” The work is drawn from a series of animations and sculptures titled Only for the wicked, scheduled to premiere next year in Lyon, France.

Collaborators since 2004, Djurberg and Berg animate fantastical forays of shame and desire. The duo’s practice is a space of ultimate freedom, Djurberg creates the animations and installations, handcrafting characters and backdrops from materials such as clay, plasticine, fabric, wire and paint. Berg then scores technopop-come-classical soundtracks to amplify the complex emotional charge of the films’ disorientating storylines.

Djurberg and Berg are represented by Lisson, Tanya Bonakdar and Gió Marconi galleries. In 2020 the pair’s sculpture Crocodile, Egg, Man was purchased for €1,600,000 in a Bukowskis auction. This month, their latest solo show The Soft Spot will open at Gió Marconi gallery in Milan. 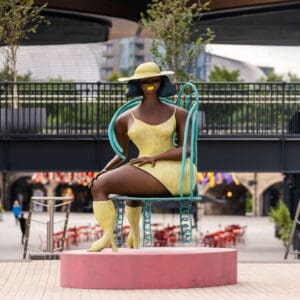