Simchowitz Gallery‘s next exhibition is a solo exhibition of work by Deng Shiqing. Stretched will be Deng’s first presentation with the gallery.

Deng Shiqing’s uncanny canvases merge a contemporary, almost digitized sensibility with a meticulous Old-Master technique. In this series, Shiqing presents women in various states of contemplation. Painted over lockdown, her characters exude an air of resignation. Does it matter what lies beyond her fantastical interiors? There is already so much to see inside. The artist captures a rare sense of interiority, where characters are at once familiar and foreign—new faces with such stirring, almost haunting expressions. Modelled after her friends, her women are regal and central, arms and legs often exposed as they sit and stretch and go about their quotidian routines.

Shiqing adorns these long-limbed bodies with geometric garments—comical cutouts that call forth frilly Renaissance collars or a court jester’s uniform. In The Fight, the main figure’s shirt appears to melt onto the table in a deliberately playful gesture while a cat paws through the air at her hair. The artist juxtaposes her stationary pose, staring quietly offstage, with chaotic movement. Even King Kong in a background poster is kicking up dust. Many works reference Shiqing’s own habits and obsessions over the course of the past year, from binged television series to poor eating habits to internet memes and other mindless phenomena. The artist inserts these sly and covert references in every canvas, tongue in cheek strata that remind the viewer that there is always more to see each time you look.

Stretched opens on August 7th, 2021, with an opening reception from 10AM – 6PM, and will run through August 28th, 2021. Simchowitz Gallery simchowitz.com

Deng Shiqing is a graduate of the Central Academy of Fine Arts in Beijing, where she won multiple student awards. She earned an MFA at the New York Academy of Fine Art. Deng has already won multiple competitions including: First prize in the Art Renewal Center’s International Salon art competition; “Best of Show’’ in the International Biennial Portrait Competition; Finalist of BP Portrait Award and honorable mentions from The Bennett Prize and the 2018 – 2019 Chubb Fellow Competition. Her work has been exhibited at the National Museum of China in Beijing, Da Fen Art Museum in Shenzen, the United Nations’ building, Sotheby’s in New York City, as well as in group shows in New York and Miami. 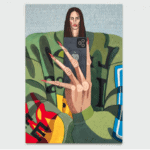 Julian Pace: Some Paintings is an exhibition of new work by the Los Angeles-based artist. This is Pace’s first exhibition […] 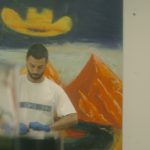 We caught up with Los Angeles-based artist Ken Taylor at the close of his latest exhibition Mountains and Roses, the […]