On World Refugee Day (Sunday 20th June), the Mayor of Rotterdam – Aboutalbe – unveiled Gavin Turk’s sculpture ‘L’Age d’Or’ (2019) on the bank of the river Maas in Rotterdam. The piece was acquired by Sculpture International Rotterdam, and is on permanent display outside the soon to be FENIX Museum of Migration.  ‘L’Age d’Or’ is a painted bronze door standing over 3.5 metres tall, which for the artist symbolises the transition between two imaginary worlds – the old and the new – which people are invited to step through and fantasize about what the future could hold.  FENIX is located at the Fenix II Warehouse in Katendrecht, Rotterdam, and is currently being restored so that it can open to the public in a few year’s time.

Lee Sharrock: ‘l’Age d’Or’ was exhibited in the Frieze sculpture park in Regent’s Park, London in 2020.  It’s a very interactive piece, inviting people to walk through the door, and it evokes the idea of walking through a door into another universe (for me anyway!). It has a surreal kind of Lilliputtian or Alice in Wonderland aesthetic.  What was the inspiration behind the sculpture, and what sort of reaction did you get from people who saw it in Regent’s Park?

Gavin Turk: I never seem to get very far away from Surrealism in my thinking about the way that art interacts with the viewer and the way the eye is led by the subconscious. Icons of surrealism, apples, candles, eggs, keyholes & doors, frequently appear and reappear in my work, here a painting by Magritte called ‘La Victoire’ becomes a leap off point in proposing a freestanding open door in a door frame that symbolically references the inside and the outside. The door at 45 degrees is neither open nor closed, in English there is a word for this state: ajar

Question: When is a door not a door?

Answer: When it is ajar.

The door, an oversized period interior door, is painted differently on either side suggests two separate rooms, the day room and the study or perhaps the bedroom and the hall.

The sculpture is always well received, as in some ways it’s the perfect prop to generate a performance between the viewer, be it old or young, and the sculpture. I have always really enjoyed the engagement whenever this piece is shown, and the work is often photographed by all sorts, and I love the tags on my Instagram! 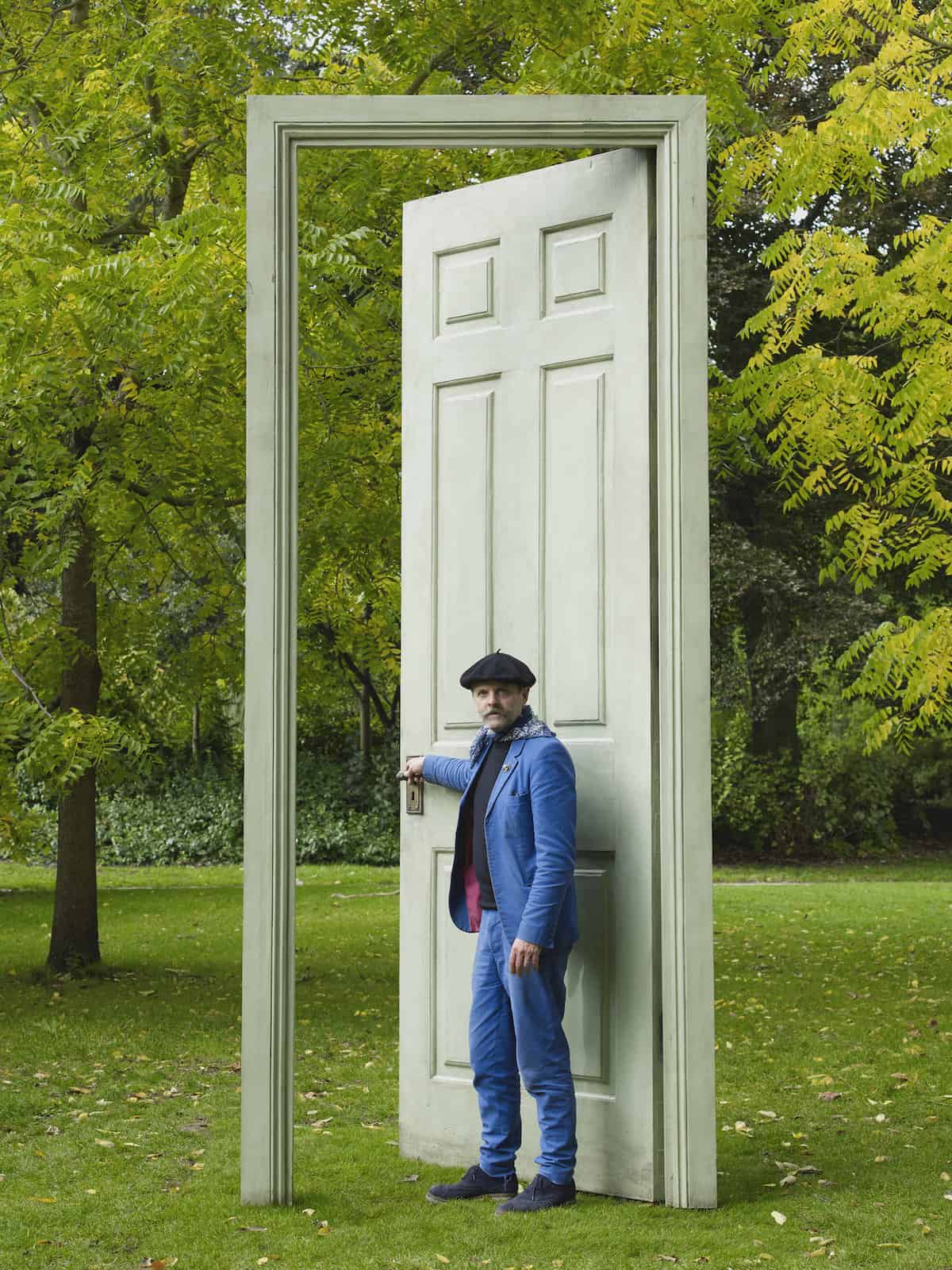 Positioning the sculpture in Rotterdam opposite the site of the future FENIX museum of migration will give it a completely new meaning in the context of migration, because it will reveal a view of the River Maas, towards the North Sea and Atlantic crossing, the scene of more than 3 million emigrants passing through Rotterdam’s port in the 19th and 20th Centuries.  When you made the sculpture, did you ever envisage it being shown in this context?

I do think of the door as a time-travelling door, or a door between dimensions, it also raises notions of home and new beginnings, it, therefore, seems like it found the perfect home!

Ai WeiWei has made work about immigration and the dangerous sea crossings undertaken by thousands of people escaping persecution or war in their countries of origin.  Do you think it’s important as a contemporary artist to examine the most urgent contemporary issues of society?

I think all art is political in some respects, art is a very blunt instrument that finds it difficult to talk about politics with a capital P, but as a provocation and as a soft power, it does have the possibility to enrol others into a new way of thinking.

What exhibitions / projects are you currently working on?

I am currently working on a new crowdfunding campaign, for an affordable multiple, let’s just say it’s going to be very personal! I am also preparing an exhibition in Cambridge next year at the Heong Gallery, that will coincide with a permeant sculpture unveiling in Cambridge, Station Square. I have also started painting, which will please Ben Brown Gallery in the lead up to an upcoming show in London. I have a series of Lockdown drawings, I think over 200 of which I am planning a presentation around.

Watch a video about FENIX journeys below :