Carl Kostyál Gallery|Hospitalet  in collaboration with Gullringsbo Konstsamling, Stockholm is now open. The inaugural exhibition is a comprehensive survey of contemporary painting entitled Stockholm Sessions.  Taking its title from the famous Stockholm Jazz Sessions of the 1960s, the exhibition features over fifty artists.

The beautiful building in which Stockholm Sessions is displayed, as a fiery and colorful fireworks display, was designed by the architect Göran Josuae Adelcrantz and built in the 1720s. Since then, it has hosted everything from hospitals to “madhouses”, was a church and now Sweden’s most dynamic art exhibition.

Stockholm Sessions is the second exhibition that alludes to the famous jazz sessions that took place in the capital in the early 1960s.

With the same creativity, dynamism, diversity and contemporary nerve, you let yourself be inspired by the tones of the music when one of the country’s foremost curators Oscar Carlson and team use the entire ceiling height when they hang the works of art as notes over the plastered baroque walls.

Despite the diversity of artists and works, a common thread runs through the exhibition. It is a younger generation that shapes its contemporaries through different techniques and expressions with its own approach based on eras where our communication style is based more than ever before on visual impression.

Book a viewing by contacting stockholm@kostyal.com

Hospitalet is located in the central atrium of what was once the infamous mental asylum known as Danvikens Hospital. Designed by the architect Göran Josuæ Adelcrantz and completed in 1725, it housed not only those considered mentally unstable but also many whose political views were considered inconvenient. Often referenced in 18th-century literature, most notably in Fältskärns berättelser by Zacharias Topelius in the 1780s, Danviken was used in common parlance as a synonym for the madhouse. 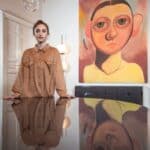 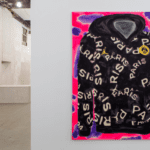 Travis Fish ‘Me and My Uncle’

Carl Kostyál Stockholm has just opened ‘Me and My Uncle’, Travis Fish’s debut solo exhibition with the gallery 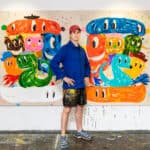