MIF21 returns from 1st-18 July with a programme of original new work by artists from all over the world. Events will take place safely in indoor and outdoor locations across Greater Manchester, including the first-ever work on the construction site of The Factory, the world-class arts space that will be MIF’s future home. A rich online offer will provide a window into the Festival wherever audiences are, including livestreams and work created especially for the digital realm.

“MIF has always been a Festival like no other – with almost all the work being created especially for us in the months and years leading up to each Festival edition. But who would have guessed two years ago what a changed world the artists making work for our 2021 Festival would be working in?”

“I am delighted to be revealing the projects that we will be presenting from 1-18 July this year – a truly international programme of work made in the heat of the past year and a vibrant response to our times. Created with safety and wellbeing at the heart of everything, it is flexible to ever-changing circumstances, and boldly explores both real and digital space. We hope MIF21 will provide a time and place to reflect on our world now, to celebrate the differing ways we can be together, and to emphasise, despite all that has happened, the importance of our creative connections – locally and globally.”

Highlights of the programme include: a major exhibition to mark the 10th anniversary of Forensic Architecture; a new collaboration between Hans Ulrich Obrist and Lemn Sissay exploring the poet as artist and the artist as poet; Cephas Williams’ Portrait of Black Britain; Deborah Warner’s sound and light installation Arcadia allows the first access to The Factory site; and a new commission by Laure Prouvost for the redeveloped Manchester Jewish Museum site.

The immense open spaces of the Factory site will be transformed for one weekend only in a new sound and light installation by theatre and opera director Deborah Warner. Inspired in-part by a painting of Manchester by William Wyld, Arcadia will see a field of luminous tents, emitting an original sound composition that weaves together some of the greatest nature poetry ever written by poets including Sappho, John Clare, WB Yeats, G. E. Patterson, Seamus Heaney, Jackie Kay, Simon Armitage, Alice Oswald and Sabrina Mahfouz, among many others. There will also be recorded contributions from leading actors and musicians including Jonathan Pryce, Jane Horrocks, RoxXxan, Brian Cox, Simon Russell Beale, Lioness and David Thewlis.

Bringing the natural world into the heart of the city, Arcadia is designed as a space for thought and reflection, inviting the audience to connect with nature and consider the relationship between the urban and the rural.

In their tenth anniversary year, the research group Forensic Architecture present a major exhibition at the Whitworth. Bringing together investigations from Palestine, via Beirut to London, Indonesia and the US Mexico border, the agency exposes how state and corporate power mobilises the air we breathe to suppress and dominate.

A highlight of the exhibition will be the first phase of a major new investigation on environmental racism in Louisiana’s Cancer Alley, a region where majority-Black communities, descendants of people historically enslaved on these same grounds, breathe the most toxic air in the US.

Hans Ulrich Obrist and Lemn Sissay co-curate a group exhibition of poets who work with visual art and visual artists who work with poetry, to go on display at HOME as part of MIF. Poet Slash Artist includes work by Tracey Emin, Inua Ellams, Heather Phillipson, Adonis, Lubaina Himid and Xu Bing, and unites voices, languages and cultures from around the world. Each of the 25 poet/artists has been commissioned to create a new work that brings together their visual art and poetry practice, to be installed in public spaces across Manchester.

Alongside the exhibition, Cerys Matthews will be curating a live programme of poetry and music at Homeground, HOME’s summer-long open-air stage, and a film season at HOME will feature work by artists who overlap between the worlds of poetry and visual art.

I Love You Too – Kemang Wa Lehulere

I Love You Too, by South African artist Kemang Wa Lehulere, is a large-scale participatory project commissioned by MIF and Manchester Libraries cultural programme. In early 2021, people from across Manchester took part in online and in person interviews, contributing their stories to a compilation of love letters. A selection of 11 Manchester-based writers sat with participants to compose letters that reflected and reinterpreted the individual participants’ experiences. This compilation will be launched during MIF21 with the publication of a book which will become a permanent part of Manchester Libraries’ collection. The book will be accompanied by an installation of new work by Wa Lehulere in the grand Reading Room of Manchester Central Library.

The immersive installation will include a new film, shot inside the museum and in the surrounding Cheetham Hill area, inspired by the museum’s history as a former Spanish and Portuguese synagogue. Laure will be responding to the museum’s extensive oral history collection to resurrect the voices, stories and lives of the Sephardi women who once gathered in the synagogue’s Ladies Gallery.

Rashid Rana, artist and academic, widely considered to be the leading Pakistani artist of his generation will present a project conceived entirely around the concept of EART, a term coined by the artist to describe moments of self-expression and creative practise inclusive of, but not limited to the arts. A major element of this project will be an anti-consumerist pop-up grocery store that will open as a fully functioning Manchester shop. The shop will sell generic, locally sourced and unbranded produce, seeking to eliminate the power of branding and reframe the act of buying, turning capitalism and consumerism upside down.

An exhibition of new work by Rashid Rana considering how this concept of EART could be applied everywhere, from social media to real estate development, will also be presented.

Artist, photographer, speaker, activist and campaigner Cephas Williams will present the first phase of Portrait of Black Britain at this year’s MIF, a project to create the largest ever collection of photographic portraits of Black British people. Following on from the success of his 56 Black Men project, this new work will crystallise and amplify the contributions made by Black people living in the UK. It will speak to our society and our humanity. The first phase of portraits will be installed throughout the Manchester Arndale shopping centre and be on display throughout the festival.

MIF presents a monumental participatory artwork by Argentinian art pioneer Marta Minujín. Audiences are invited to visit a 42m sculpture of Big Ben (the world-famous nickname for the Elizabeth Tower) lying down in Piccadilly Gardens. Inside, a new film by Minujín will show the iconic landmark quitting Westminster to come to its new home. Big Ben Lying Down with Political Books will be covered with 20,000 books which people are invited to take away at the end of the festival. The artwork continues Minujín’s series The Fall of Universal Myths and is a joyful provocation for us to reimagine our national symbols and to unite around ideas of democracy and equality.

For this year’s MIF artist Christine Sun Kim will install captions, usually used to convey text on our screens, throughout the streets and buildings of Manchester. Some are descriptive, depicting the world that surrounds us while others are more poetic, inviting audiences to ask what they perceive and understand about their surroundings. Playful, powerful and political, Captioning the City invites audiences to consider what makes up the essence of a city, and to experience the world in a new dimension.

Christine Sun Kim is a US-born, Berlin-based artist whose work considers how sound operates in society. Her practice uses everything from written text and musical notations to American Sign Language to explore her relationship to sound, verbal language and the wider environment.

The Savannah Centre for Contemporary Art and Red Clay Studios, established by Ghanaian visual artist Ibrahim Mahama in his hometown of Tamale, run a series of experimental programmes designed to educate, stimulate and encourage young people from communities with high levels of poverty and low levels of education. This film tells their story.

Mahama often examines how workers are affected by state or corporate policies and practices, and in many cases created his own temporary workforce in the making of his art. His expansive practice includes creating education and cultural infrastructures, such as the Savannah Centre for Contemporary Art (SCCA) in Tamale, an institution conceived as a studio space and exhibition venue. In April 2021, Mahama opens his third venue, Nkrumah Voli, to the public. Located in central Tamale, the silo will function as an exhibition space and repository for ecological forms and archaeological artefacts from the region.

For this project, Mahama is creating a film about the activation of Parliament of Ghosts (MIF19) and the additional education spaces he is building in Tamale.

These and other world-renowned artists from different art forms and backgrounds create dynamic, innovative and forward-thinking new work, staged in venues across Greater Manchester – from theatres, galleries and concert halls to railway depots, churches and car parks. MIF works closely with venues, festivals and other cultural organisations globally, whose financial and creative input helps to make many of these projects possible and ensures that work made at MIF goes on to be seen around the world.

MIF supports a year-round Creative Engagement programme, bringing opportunities for people from all backgrounds, ages and from all corners of the city to get involved during the Festival and year-round, as volunteers, as participants in shows, through skills development and a host of creative activities, such as Festival in My House.

MIF will also run The Factory, the new landmark cultural space currently being built in the heart of Manchester and designed by the internationally-renowned architect Ellen van Loon of Rem Koolhaas’ OMA. The Factory will commission, present and produce one of Europe’s most ambitious and adventurous year-round creative programmes, featuring bold new work from the world’s greatest artists and offering a space to create, invent and play.

Attracting up to 850,000 visitors annually, The Factory will add up to £1.1 billion to the economy over a decade and create up to 1,500 direct and indirect jobs. Its pioneering programme of skills, training and engagement will benefit local people and the next generation of creative talent from across the city, whilst apprenticeships and trainee schemes are already underway during the construction phase. 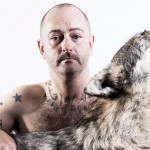 According to the sensationalist headline in the Independent on Wednesday, Douglas Gordon had gone ‘on an axe rampage after receiving poor reviews’ for his new play at Manchester’s HOME theatre. For one chilling moment we wondered if the strain of being one of the lesser YBAs had finally overpowered him, or if perhaps he suddenly regretted that ghastly Pace show with James Franco ? 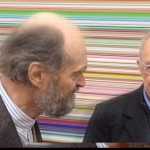 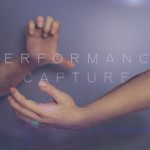 For MIF15, artist Ed Atkins is drawing back the digital curtain with Performance Capture. 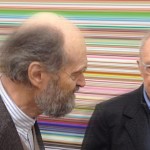 Gerhard Richter and Arvo Pärt two of the world’s greatest artists collaborate for the first time.

This remarkable project, several years in the making, brings together two of the world’s most influential and enduring cultural figures: artist Gerhard Richter and composer Arvo Pärt.