Xavier Hufkens are opening Daniel Buren’s new exhibition Géométries colorées today April 22nd This will be the first exhibition that Buren has conceived for Xavier Hufkens Rivoli space. The exhibition comprises a series of high wall reliefs in which the artist combines his visual tool (the alternating stripes) with two other important elements in his work (colour and mirrors) to create works that enter into a dialogue with the space, with each other and with the viewer.

Géométries colorées is the first exhibition that Buren has conceived for the Rivoli space. This is important to note as it is not the artworks per se that are the subject of the exhibition but their relation with the space in which they are situated. And for the artist, this is both a physical reality i.e. the architecture (in this instance, the double-height void, clean contemporary lines and tight volumetrics) and a set of ever-changing conditions (light, atmosphere, people, even principles and ideologies). Buren’s high reliefs – dazzling three-dimensional assemblages of powder coated coloured aluminium, mirrors and the artist’s trademark stripes – can be seen as devices that both challenge and reveal the physical and intangible qualities of the site. The mirrored surfaces not only capture the surrounding space, which then becomes part of the artwork, but also reflect it back and forth from work to work, thus creating a doubling and redoubling effect, ad infinitum. For all their rigid geometry, systematic construction and use of ‘hard’ industrial materials, the reliefs are far from static: they are responsive, mutable and constantly changing according to the circumstances presented.

The stripes in the reliefs are the only stable element that Buren has used in his work since 1965. This pattern, which the artist describes as his ‘visual tool’ [outil visuel], consists of a series of alternating white and coloured stripes that measure precisely 8.7 cm. The scale is derived from the width of the stripes on the first linen fabric he found as a young artist in Paris. Since then, they have been used in artworks and installations all over the world, both permanent and temporary. But like the mirrors, the stripes are not the overarching raison d’être of the work. Rather, they are a visual reference point, or touchstone, that allows space to be measured, especially by the artist, purely by eye. Here too, the aim is a form of spatial disclosure. In relation to this, the artist has said: “I don’t show stripes, they allow me to show things. What happens around them? How does the work influence its environment? …If you see them as a painting, you’re on the wrong track. They are meant to challenge the idea of a frozen point of view.”

The notion of a ‘frozen point of view’ is a reference to the viewer’s physical position as well as their thought processes, both of which can be fixed or mobile. The shifting nature of the high reliefs is an encouragement to move around the space and to engage with works from various perspectives. The viewer’s reflected form also appears in the works and, in so doing, becomes a dynamic part of the visual experience. Here, colour plays a pivotal role and is used to potentially emotive effect. Colour has long fascinated Buren, who says: “Ever since I first started out, colour has been one of the things that have interested me the most and that I’ve tried to approach in a new way… colours carry thousands of implied meanings that escape the artist. If there’s one thing that’s hugely subjective, it’s colour. It affects each person in wholly different ways. I think it’s important to show that the effect of colour does not depend on an individual artist’s intention, but rather on the fact that it’s recreated by the eye of the observer.”

In Géométries colorées, Daniel Buren creates an optical experience that deals with different levels of perception: how we see the artworks themselves, how they make us view the surrounding space and, ultimately, since we behold ourselves in their surfaces, what they make us think.

Daniel Buren (b. 1938, Boulogne-Billancourt, Paris, France) lives and works in situ. He represented France at the Venice Biennale in 1986, for which he was awarded the Golden Lion. He was also honoured with the Praemium Imperiale for Painting in Tokyo (2007), among many other awards. Several volumes of his catalogue raisonné have already been published. 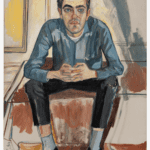 A new exhibition of portraits by Alice Neel

A new exhibition of portraits by Alice Neel (1900–1984) brings twentieth- century America to life through faces old and young. Painted over […]