Today March 11th, 2021, will go down in art history, Christie’s have concluded its single lot online sale of Beeple’s Everydays: The First 5000 Days, achieving $69,346,250 and setting the third-highest price for a living artist at auction ever in a watershed moment in the development of digital art. The sale of the first purely digital NFT based work of art by a major auction house achieved a new world record for any work of digital art, the highest price for any lot in any online-only auction, the highest price for any winning bid placed online, and the highest total for any online-only auction. Gen Z (1997-2012) bidders accounted for double the amount of Baby Boomer (1946 – 1964) bidders and 91% of bidders were new to Christie’s.

“Artists have been using hardware and software to create artwork and distribute it on the internet for the last 20+ years but there was never a real way to truly own and collect it. With NFT’s that has now changed. I believe we are witnessing the beginning of the next chapter in art history, digital art.  This is work that has just as much craft, message, nuance and intent as anything made on a physical canvas and I am beyond honoured and humbled to represent the digital art community in this historic moment.“

Digital Art has been an established artistic medium since the advent of the personal computer. However, before the introduction of NFTs and Blockchain technology it was impossible for even the most celebrated digital artists to claim their place in the art market. These mechanisms have paved the way for future of art of purely digital means, and Christie’s is proud to have been on the forefront of this pivotal movement. As the art world continues to embrace digital art, Christie’s looks forward to holding further sales of NFTs. Full details on these plans will be released in due course.

“The last year has been an extraordinary period for the art market, and today’s result is a fitting tribute to the significant digital transformation that has taken place at Christie’s. And just as our business has evolved, so has the way in which art is being made.

I’m thrilled to have had the opportunity to introduce the Christie’s audience to Beeple’s work, and I’m honoured to welcome all the of the remarkable new clients, who not only bid with us but reached out to share their brilliant ideas on how to further the crypto art movement. Beeple’s success is a testament to the exciting possibilities ahead for this nascent marketplace. Today’s result is a clarion call to all digital artists. Your work has value. Keep making it.”

MakersPlace, a leading marketplace for online collectables helped
facilitate the sale along with the artist. 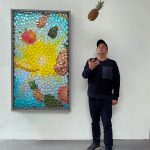 The Dole Sunshine Company today announced that it has joined forces with artist David Datuna —you know, the one who ate […]