This isn’t Superplastic’s first collaboration with Gorillaz, but it is the largest. 2019 saw Gorillaz lead singer 2Dimmortalized in vinyl and was the first Gorillaz toy of its kind in over ten years since Gorillaz co-creator JamieHewlett first worked with Superplastic founder Budnitz on the iconic vinyl Gorillaz toys back in 2005. Thissecond collaboration includes an all new 2D figure, as well as Murdoc, Russel, and Noodle.”After more than 15 years creating vinyl toys with the Gorillaz, I’m super excited to be releasing the first full set of Gorillaz toys in 10 years.

As the world’s premier boutique creator of art toys, Superplastic only works with a handful of the world’s top artists. Jamie Hewlett is a genius and his twisted universe is a massive inspiration for me, Janky and Guggimon, and everyone at Superplastic,” says Superplastic founder Paul Budnitz.The limited-edition vinyl toy collection features four figures – one for each band member – with each ranging between 9 and 12-inches tall and retail from $80-95 MSRP through December 31, 2020.

For the first 48 hours, all orders made will come with an exclusive commemorative Gorillaz pin gift with purchase. The 2D and Murdoc toys to ship in December with Noodle and Russel to ship February 2021. All orders can be bundled to include a ticket to Song Machine Live, a one-off fully live Gorillaz concert created to watch from the comfort of your home and available to stream worldwide on LIVE Now.

A full show production featuring the Gorillaz live band led by Damon Albarn, blending exciting real-time live performance and Jamie Hewlett animation plus appearances from very special guest artists too. With three separate live performances, anything can happen and no matter where you are in the world, there’s a show start-time to suit you. With millions of dollars in toy and apparel sales to-date, as well as product drops that sell out in minutes, Superplastic continues to cement its position as a leader in the new era of digital entertainment and virtual celebrities – one that is breaking boundaries between online and traditional media, and real and virtual worlds. 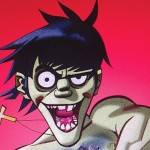