The modern pop world of Philip Colbert will go on display in a major show at Saatchi Gallery presented by Unit London.  Lobsteropolis promises to transport visitors through an odyssey of unseen large-scale paintings and sculptures. On 29th October the exhibition opening will be celebrated with a giant outdoor inflatable lobster.

Lobsteropolis will be the largest UK survey to date of Colbert’s universe, which has been designed to work both digitally and in situ by utilising robots that allow viewers to interactively engage with the exhibition. Guests can tour the gallery by registering online and booking a slot with their own automated machine, allowing digital users to navigate through the psychedelic lobster land. After the user has registered online, they will be able to move around the gallery via their smartphone or computer and zoom into the paintings, large scale bronze and marble sculptures and lobster robots with unprecedented detail. The exhibition will also be hosting the world’s first robot private view on 29th October.

A one-way system will guide visitors through the exhibition, picking a route through Colbert’s works which interrogate mass consumerism and reference recent contemporary culture and history. Colbert has created a global following for his cartoon lobster persona and his masterful hyper-pop history paintings. His work explores the patterns of contemporary digital culture and its relationship to a deeper historical dialogue. Colbert once said, “I became an artist when I became a Lobster”.

Under lockdown, Colbert’s shrunken horizons and own social media echo chamber prompted him to conceptualise Lobsteropolis as his response to the pandemic. Taking a walk to a gallery and seeing art in situ is an important part of society and a culture in which people are free to do things for themselves. In his brash, splashy world of contemporary culture, Colbert explains the reasoning for his cartoon-like vision.

“The lobster is my materialistic alter-ego. Lobsteropolis is a vision of a sci-fi future where, due to lockdowns, we have robot selves who can go and explore the physical world, while we remain indoors.”

Colbert sees the lobster as embarking on a quest for romance and human connection, trying out different guises and new personas. As collectively we find ourselves in a new and surreal world, with many isolated from families and friends, the lobster too is looking out to the horizon. “Our fear of solitude is not unique to the current pandemic, but ultimately, we are alone, which is part of the human condition,” says Colbert.

As the idea for the show was born from isolation and the severance of human connection through social distancing, Colbert wanted to create a lockdown-proof concept. He came up with the idea of the robots so that guests could check-in, regardless of the pandemic. “One could have easily rescheduled but I wanted to put it out there and make it more of an experience. I wanted to make an ambitious, bold physical show designed for people to view via a gallery robot,” Colbert explained. “I think of it as a bit like sending a diving robot down to see a shipwreck.”

Colbert points out that many of the symbolic references of art history have become as iconic in themselves as Coca Cola or Google; Warhol’s work is easily as recognisable as the McDonald’s sign or the apple symbol. As Colbert’s work addresses the commercial realities of hyper-consumption – and what is considered an uploadable social media experience – Colbert’s ‘Lobsteropia’ is a continued journey of the lobster as art protagonist. Philip Colbert’s works are exuberant attempts to update the practice of collage for the internet age. His paintings challenge and toy with the viewer’s cultural vocabulary. He superimposes commonplace, banal objects onto painted faces and merges portraiture with popular culture in a Magritte-like fashion. Emojis, computer windows, classical architecture, Lichtenstein spots, comic book sound effects, cactus plants and pixelated mouse cursors all have a place in Colbert’s world. His work powerfully explores the patterns of contemporary digital culture and its relationship to a deeper art historical dialogue. Philip Colbert has been championed as a contemporary pop master by David Hockney and Simon De Pury. His multi-disciplinary art projects have seen him exhibit at Art Basel, Frieze London and Tate Modern. 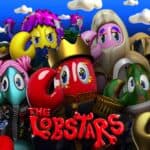