Record players (a record player is also known as a turntable) have been back in style for the better part of a decade. Although digital streaming is a popular way to listen to music, many music lovers miss the richness of sound quality found in records. Record players and turntables have made a resurgence in the United States and abroad for a reason. 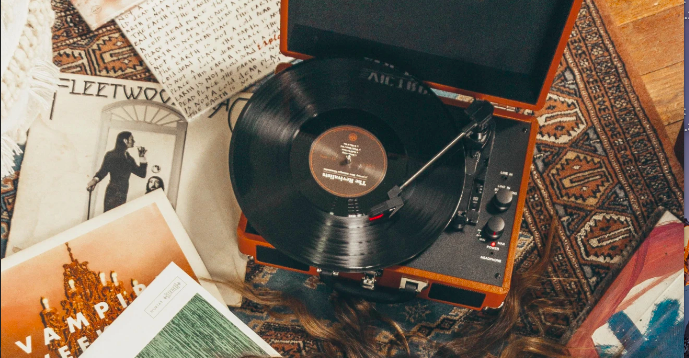 Since the invention of records, many additional choices are now available. Sound systems refer to the device that can play music, including digital recordings, cassettes, and CDs.

CD players and MP3 players were once a popular alternative to records and cassettes. Because CD and MP3 players include the option to skip songs, this was widely appreciated compared to manually fast-forwarding cassette tapes. In addition to their functionality, CDs and MP3 players seemed more convenient and portable.

While many turntable-based sound systems are large and stationary, new record players and turntables can be moved much more easily. Since the advent of digitized music can inadvertently distort sound compared to an analog recording, record players remain top-notch in their quality of sound.

How Does a Record Player Work?

Lots of people prefer record players for the nostalgia effect. A record has an indented grove that has tiny bumps designed for the record needle. When the record needle moves across the record, an electrical signal is made.

A record player is usually positioned on a level platform where unexpected movement is not likely to occur. Wall shelves, desks, or even floors can all be used to play an antique record player. Most current record players have a built-in platform so that the record is easily balanced.

The arm of the record needle is usually adjustable, making alignment much easier. The “tonearm” is often parallel with the record while playing, but the sound can be distorted if it is too high.

Analog technology is the original form of a sound wave. Digital technology is essentially a copy of the sound wave. While the song is still presented in a similar way, many people find record players to have a richer, more “textured” sound.

Digital music can be created to make a track sound louder than it actually is. This is an especially important fact to remember when using turntables. Because the volume is artificially increased, the sound of the digitized song can become distorted. When this occurs, details of the music can be lost.

Analog music does not require the compression of audio files. Since the digital data cannot be processed through a record player, analog can interpret the “full picture” of a single track. In addition to the song quality itself, record players can add an ambiance of soft, background noise that is especially coveted with jazz and blues albums.

Is There a Difference Between Turntables and Record Players?

For those who want to use these players as an instrument or a listening device, custom made players are designed for the individual. Since listening priorities are different for everyone, record players, and turntables that are customized for the listener are highly sought after.

A customized turntable can include visual and sound changes. Every part of the sound system has specific parts that are included for a reason. High resolution and precise manufacturing details such as a quality tonearm are some of the benefits of using a customized record player or turntable.

Customized record players and turntables can be designed for more complex features or simplified for those just getting started. Depending on what the listener or player desires (how many USB ports are needed, etc.), a record player will be fully functional for the individual.

Record players and turntables provide a rich sound quality that does not depend on a representation of sound waves. For a pure listening experience, many people prefer to customize their players to the exact sound qualities they find most appealing. For a mixture of complex choices and simplicity, this choice is designed for all listeners.