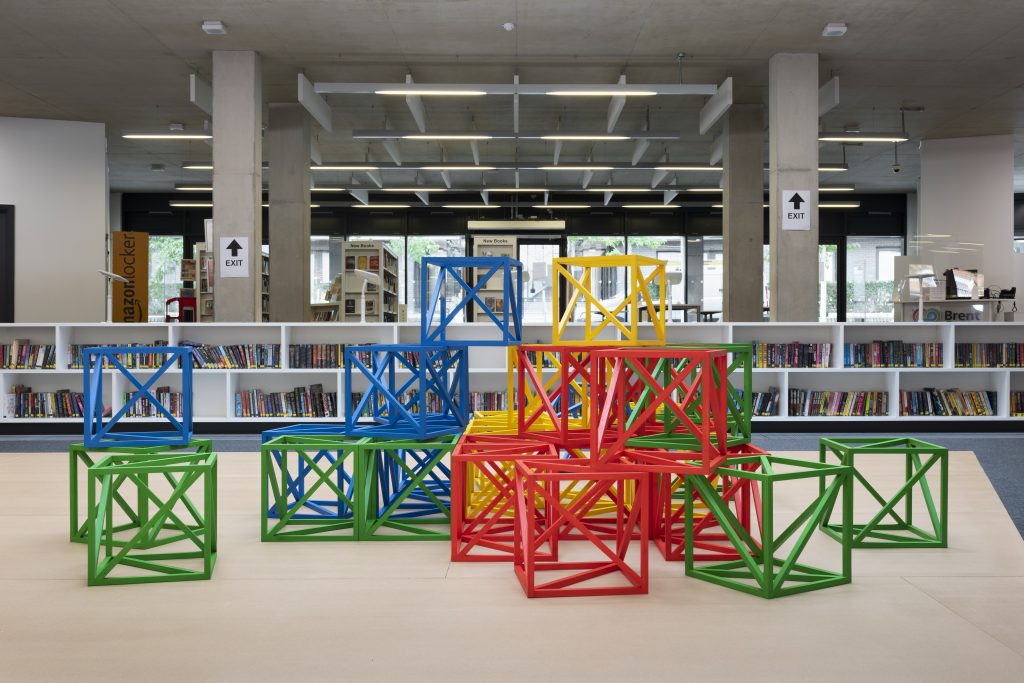 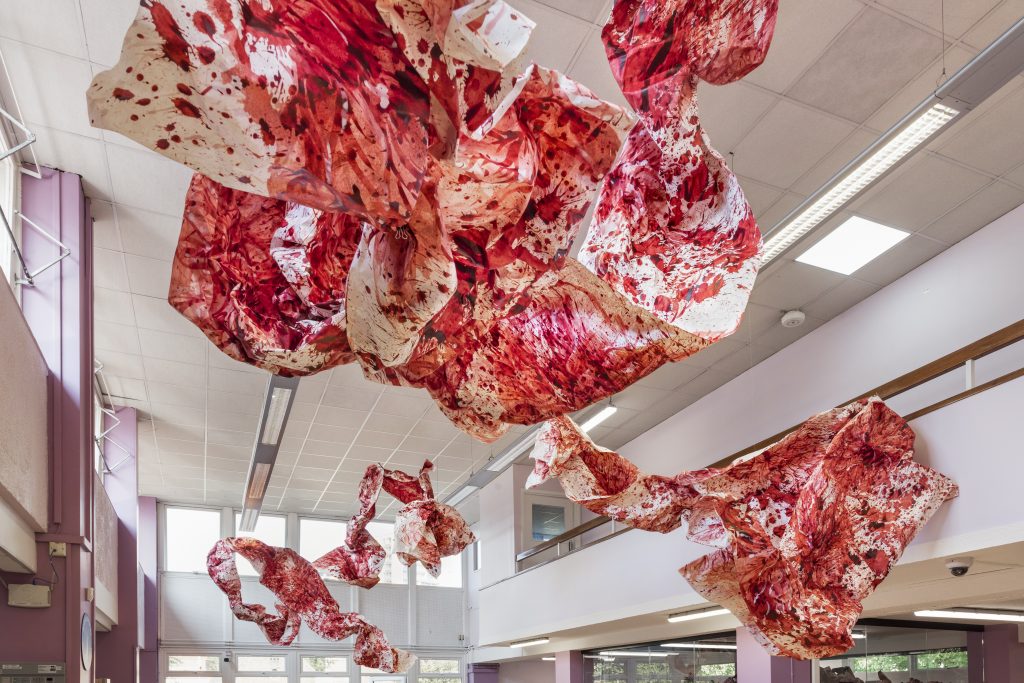 The featured artists are: 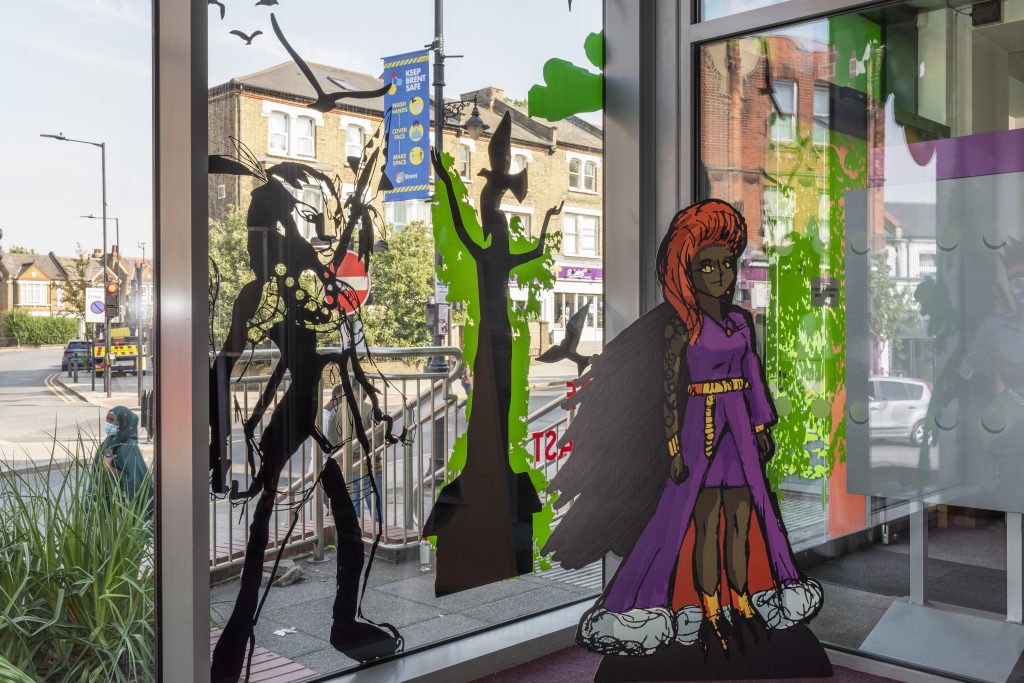 David Blandy, The World After, at Harlesden Library Plus Part of the Brent Biennial, Brent 2020, London Borough of Culture Photo © Thierry Bal

Community and council libraries have collaborated with 10 artists to present new commissions, including an interactive sculpture by Rasheed Araeen at The Library at Willesden Green, a parallel lending library of selected books paired with sculptures by Brian Griffiths at Cricklewood Library, and a large-scale twisted paper installation by Imran Qureshi at Ealing Road Library. 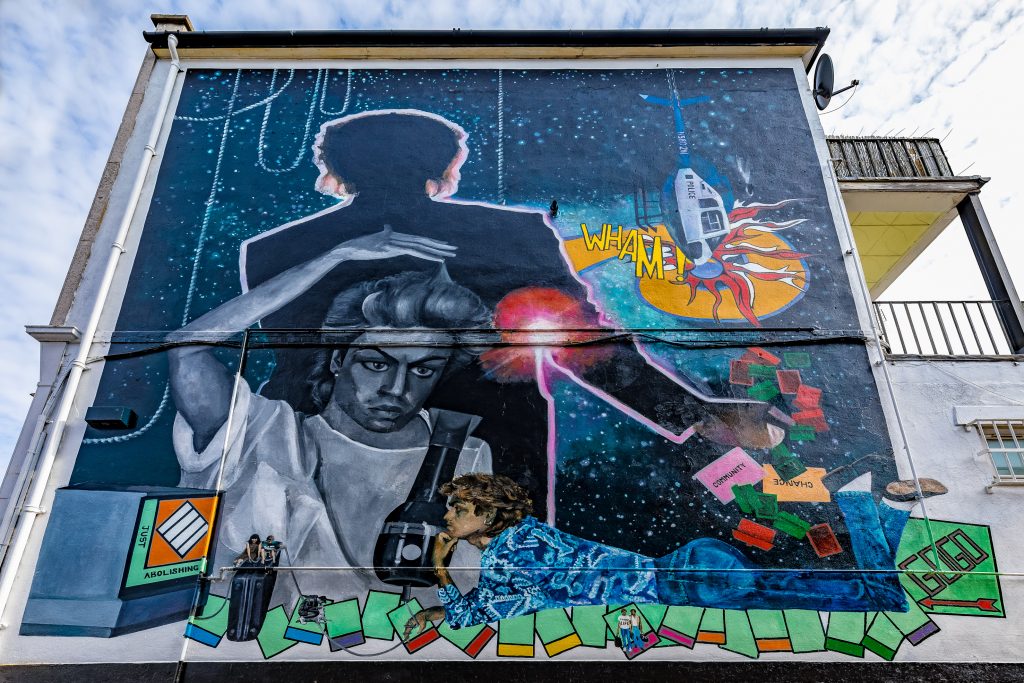 Co-commissioned by Studio Voltaire and CREATE London with Brent 2020, British artist Dawn Mellor has created a 9-metre high mural titled George Michael TV Outside – celebrating the life of local hero George Michael, who lived and went to school in the area. 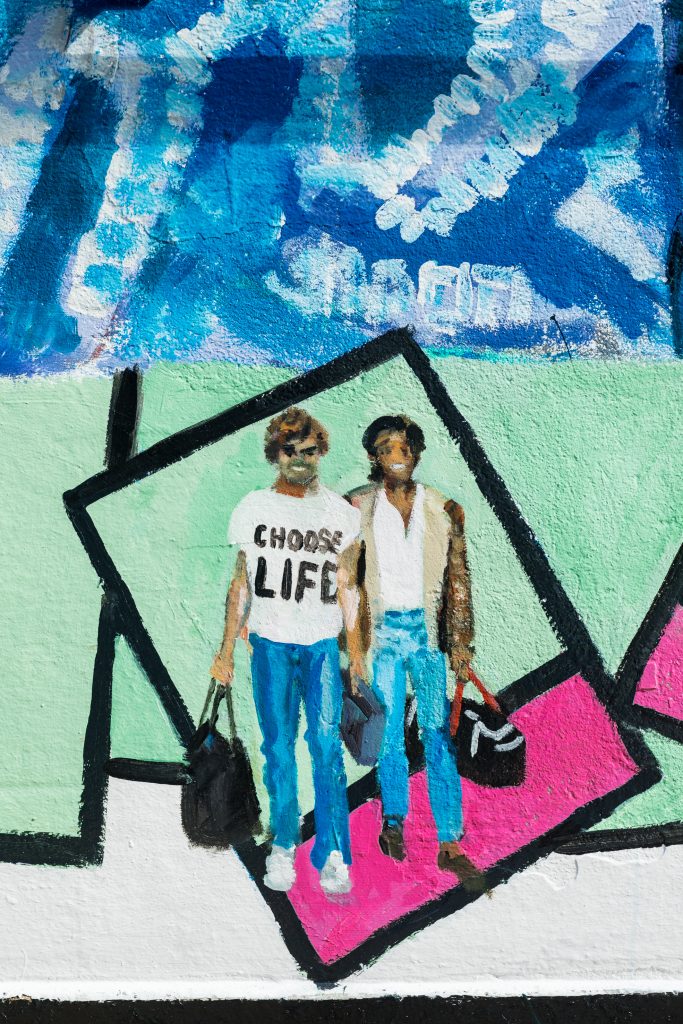 Supported by Art Fund, new commissions by Barby Asante, Adam Farah, Yasmin Nicolas, Dhelia Snoussi and Abbas Zahedi explore personal and collective stories that have shaped Brent’s identity as a place where self-organising is intimately linked to care, community building, and resistance. Events and artworks will centre on the relevance and connection of histories through performance, conversation and film.

Additionally, Culture Fund programmes and events presented by ActionSpace, AiR, INANIMATORZ and Crisis will take place, highlighting their work with artists and communities in Brent.

A team of curators and producers have worked with Lois Stonock, Artistic Director of Brent 2020, to develop the programme.

“We’ve created the Brent Biennial as a platform for the visual arts in Brent that can develop over the coming years and as one of the legacies of Brent 2020. Brent’s creativity lies in its communities, in the streets and its civic spaces. We see the Biennial as an opportunity to shine a light on the rich stories, ideas and voices that reside in the borough and also a unique context for artists outside of the borough to work in. Our hope is it reflects the true diversity of London with all its energy and talent, and shows how art can be part of our everyday lives.”

Guided walking tours will be held during the 12 weeks of the Biennial, as well as a public programme of artist talks and workshops, some presented in partnership with ArtReview. An illustrated guide will be available to visitors to download from the Brent 2020 website or to pick up from venues during the Biennial.
For full details brent2020.co.uk

Brent 2020, London Borough of Culture
Brent is The Mayor’s London Borough of Culture for 2020. Our programme will explore the stories, art and emotions that hold life in Brent together, uncovering and celebrating the borough’s untold tales and unheard voices. We are the home of Zadie Smith, reggae, English football and its captains. We have London’s oldest road, the biggest Hindu Temple outside India, the Kiln Theatre and Mahogany Carnival Design. We are where city becomes Metroland; where roads, waterways and railways cross; where outsiders fight for their place. We are Jayaben Desai, George Michael, Cyrille Regis, Keith Moon, Rachel Yankey, Janet Kay, Twiggy, Bob Marley and Trojan Records. It is from this alchemy that our year of culture comes. Brent is more than a borough of culture: This is the Borough of Cultures.