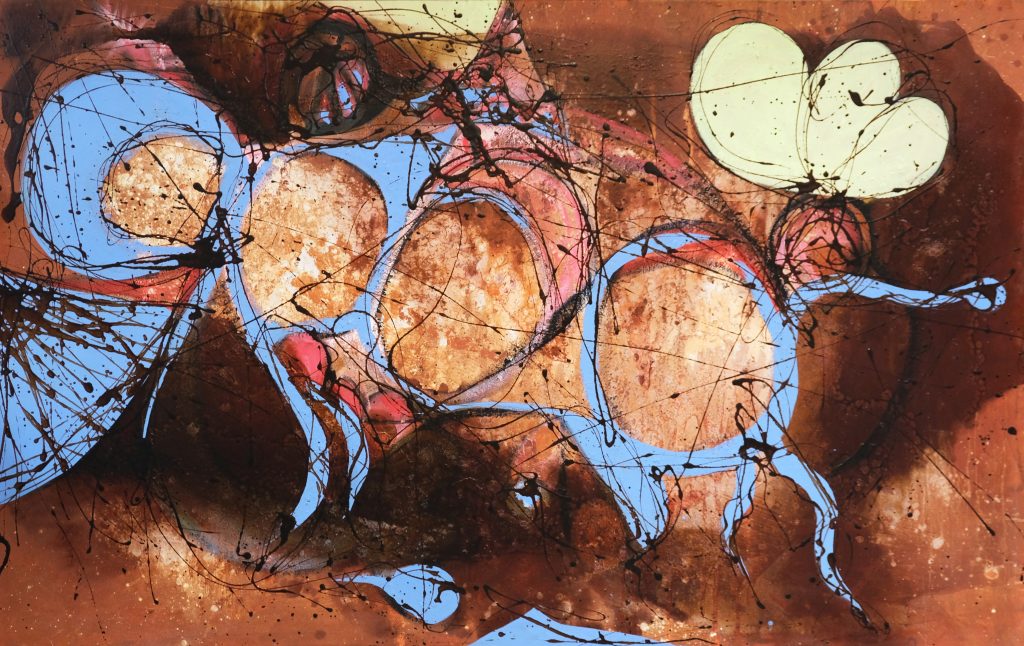 A Happy Accident is the first solo exhibition by Monty Hitchcock and will open at The Union Club on Wednesday 16th September through to 30th October 2020.

After 35 years as an Art Director in the film industry, events in Monty’s life compelled him to begin expressing himself on canvas. Two cathartic years of self-exploration has resulted in an extraordinary collection of large-scale paintings, a selection of which are being displayed for the first time at The Union Club.

In 2018, at the age of 55, Monty was diagnosed with ADHD, a period he sums up as one ‘of adjustment, calibrating medication, and coming to terms with the diagnosis.

‘As things inside the kaleidoscope began to settle I felt a compulsion to paint. Over a period of three months, I painted non-stop in a cramped shed, all night sometimes, using the same 5 small canvases over and over again until they fell apart.’ 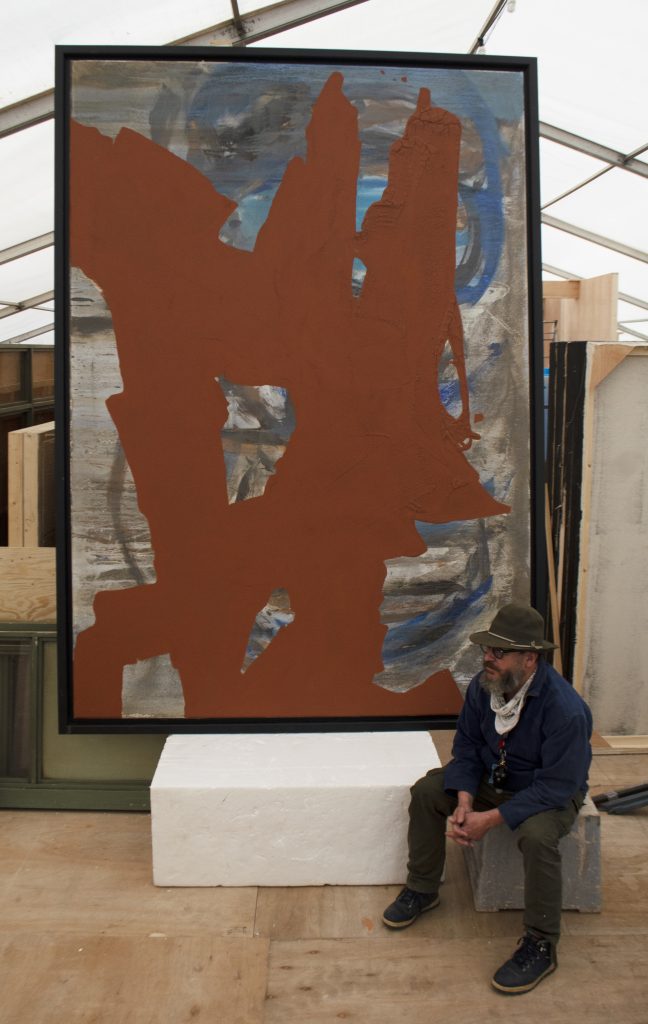 Studio shots of Monty Hitchcock with America, 2020, Courtesy the Artist

Monty’s prolific output, and his compulsion to paint on larger and larger canvases, quickly made it apparent that he had outgrown his shed. And so, earlier this year, Monty moved his working space to a film studio that triggered an extraordinary outpouring of creative energy and stories on canvas.

A Happy Accident features one of Monty’s most formative works to date: Cave. (As seen above) As Monty says:

‘Cave was my first proper painting. It is a response to the very beginning of humans creating images 40,000 years ago. I recognized the visceral power of those images when I first put paint on ‘something’ in my shed. It is not intended to be a copy or even resemble the original cave paintings, but it is the most personal tangible image I have ever or probably will ever create, my journey started here; ‘Cave’ is my own spiritual birthplace.’ 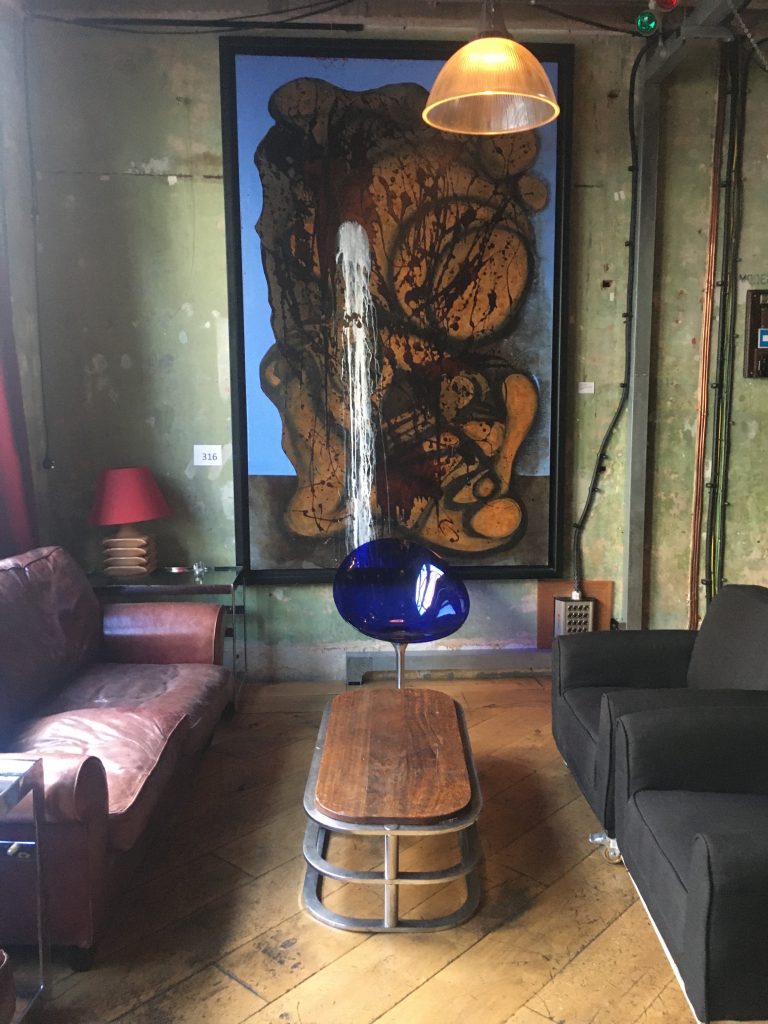 Installation at The Union Club with Gusher, 2019

Painted in 2019, Cave opened the floodgates to a rush of works of which seven are presented at The Union Club; Cave, Gate, Gusher, My Wife Sleeping, Reggae, We Bought a Dog, and Who’s Pulling the Strings.
The paintings evidence an intense physical working method and share a freedom and vitality in their multiplicity of curves, lines and forms, applied by the artist in richly layered paints that pulsate on the canvas in a language which is, in parts, abstract, figurative and expressionistic. For Monty, his diagnosis of adult ADHD has proven to be a life-changing gift. In Monty’s words:

‘For too long mental health has had a dreadful stigma attached to it and my paintings are my message to shout from the rooftops a positive message about mental health awareness and what can be achieved, no matter what your age. I didn’t see this new avenue of life coming. If I can do this at the age of 57 then there is so much hope for younger (and older!) people out there.’ 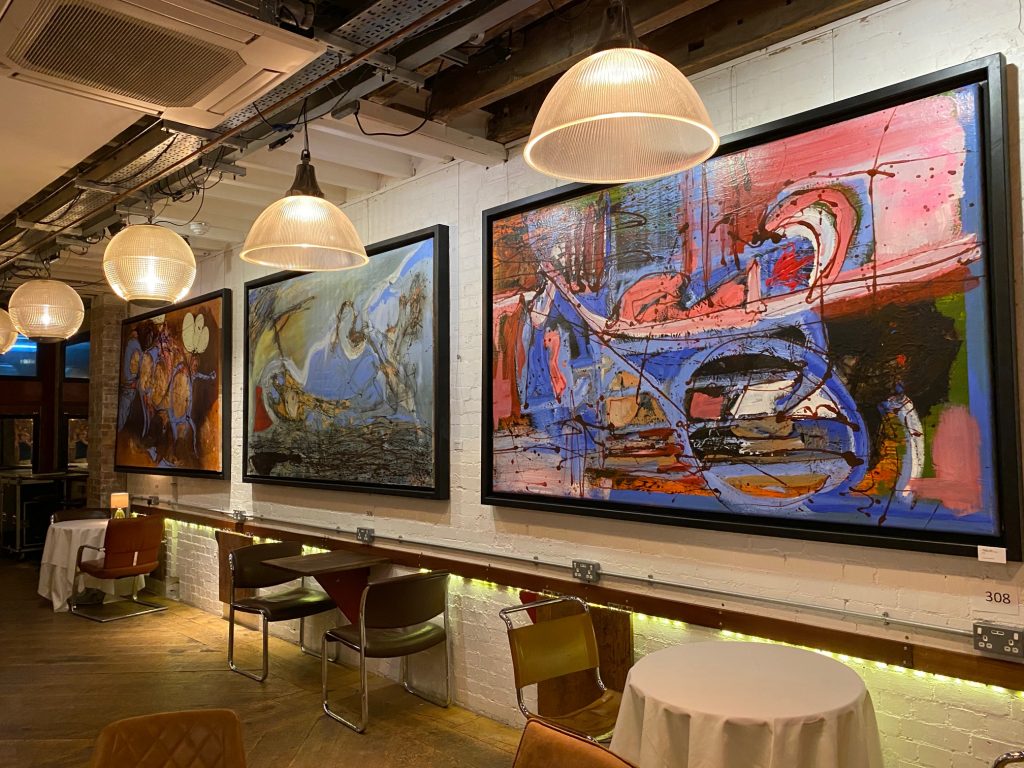 Non-members are welcome to visit on Wednesday, Thursday and Fridays, 10:00-6:00 pm, by prior appointment. Please contact Roz Arratoon: roz@unionclub.co.uk
Supporting the ADHD Foundation 5% of sales proceeds from A Happy Accident will be donated to the ADHD Foundation, the UK’s leading neurodiversity charity; whose patron, Rory Bremner, led Monty Hitchcock to discover his own happy diagnosis. adhdfoundation.org.uk 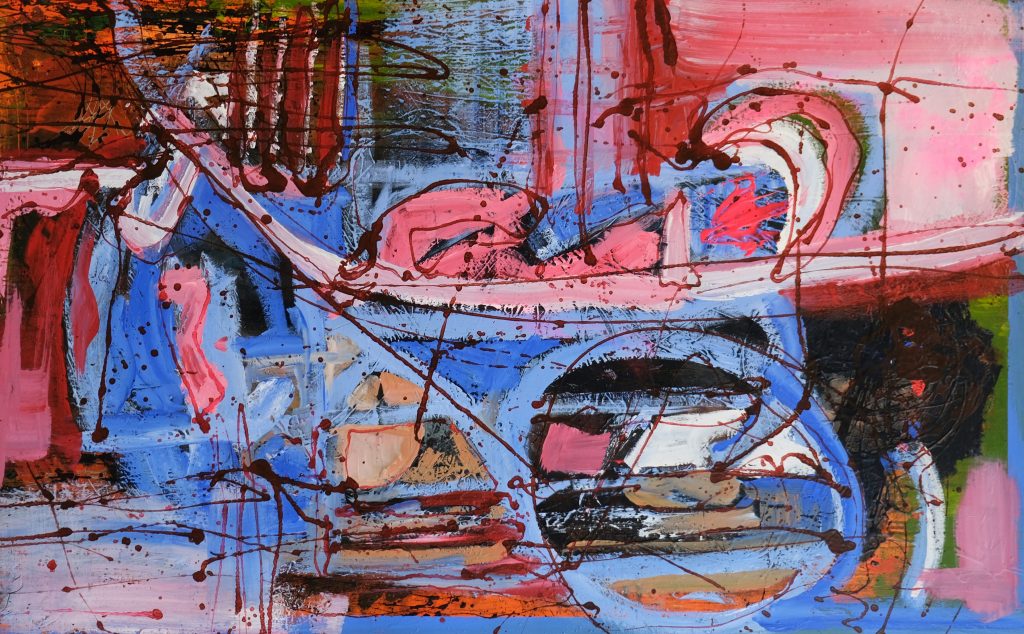 Monty Hitchcock (b.1962) has spent 35 years in the film industry. He is an Emmy award- nominated Art Director who has worked with directors such as Sidney Pollack, Ridley Scott, and Clint Eastwood, and stars including Morgan Freeman, Bridget Fonda, Robert Redford, and Bill Murray; creating iconic film sets all over the world. See: imdb.com
Monty is currently Art Directing the second series of Pennyworth, an American drama exploring the early life of Alfred Pennyworth; who, in the world of DC Comics, became the butler to Bruce Wayne. The series stars Paloma Faith and is being filmed at Warner Bros Studios, Leavesden. Throughout his career, Monty has maintained and nurtured his primary passion for painting, taking every opportunity to develop his range and to experiment.  montyhitchcock.art

About The Union Club

The Union Club is a unique and individual private members’ club set up 27 years ago in a listed Georgian townhouse sitting in the heart of Soho at 50 Greek Street. In 2015 the club acquired the 4-storey premises next door to offer a unique and eclectic warehouse-style space for its members that is also perfectly suited for art exhibitions, events, and film and photography shoots.