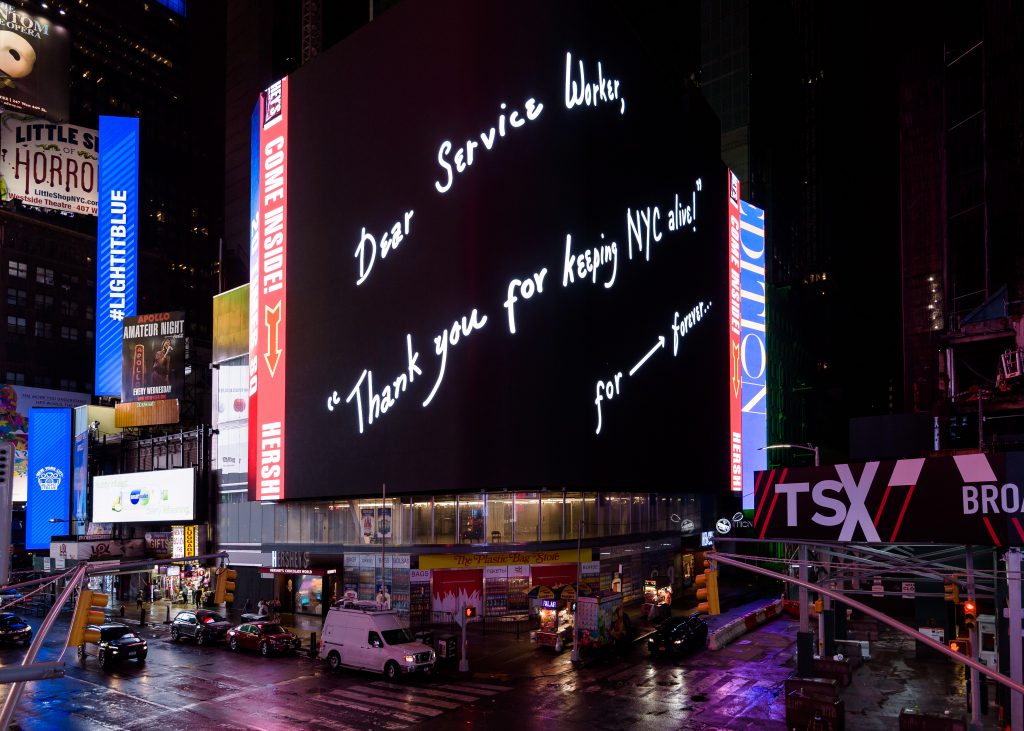 The Queens Museum, Times Square Arts and MTA Arts & Design are pleased to announce their collaboration on a new public art initiative by artist Mierle Laderman Ukeles, which will be on view on the large-scale digital billboard at 20 Times Square, on the facade of the Queens Museum facing Grand Central Parkway, and across digital displays throughout the MTA subway system. For ——> forever… is both a response to the pandemic and a continuation of Ukeles’ long-standing dedication to honoring the unending labor of New York City’s public service workers through her artistic practice. The three-part initiative will launch today Tuesday September 8th.

The artist’s public message, which reads:

“Thank you for keeping NYC alive!”

is a gesture of gratitude via a direct address to New York City’s public service employees, in particular infrastructure workers — including sanitation and transit workers — who are sustaining the city through the COVID-19 pandemic. The message, written in the artist’s hand, is framed by the vibrant colors of safety green and emergency red/orange. The resounding message will be viewable throughout a network of locations designed to reach our city’s public service workers — from transit and sanitation workers in Times Square to essential workers continuing their daily commute. Many of these workers travel to and from Queens, one of the boroughs hardest hit by the pandemic. For ——> forever… aims to commemorate the efforts and undertakings of public service workers, specifically during the last few months.

“The Queens Museum is proud to work in partnership with Times Square Arts and MTA Arts & Design to present this timely and hopeful message across the city at this tumultuous time. Mierle Laderman Ukeles has worked tirelessly to make visible the labor of public service workers since 1979 and this message will flow through the infrastructure of the city as New York recovers. This project builds on Mierle Laderman Ukeles: Maintenance Art, the artist’s 2017 retrospective at the Queens Museum”

In partnership with OUTFRONT Media, Ukeles’ artwork will appear on over 2,000 digital displays throughout the subway and rail digital network; the very locations where service workers pass through each day. At the same time, For —–> forever… will appear every 15 minutes on the large scale digital billboard of 20 Times Square, rising 120 feet over the plazas of Times Square, which is now seeing an average of nearly 90,000 visitors each day. The Queens Museum is proud to share that Ukeles’ work will fully occupy the museum’s 200-foot-long glass façade for a year, where it will be seen by many thousands of drivers on Grand Central Parkway each day.

“With the incredible heroism and tireless work of subway, bus and rail employees, this pointed acknowledgement of their work is relevant and necessary right in the space where they work or commute: subway and rail stations. As an artist of the public sphere, Ukeles has always worked to keep the public eye on the people who sustain the city, and this heartfelt ‘thank you’ will touch those who keep New York moving,” 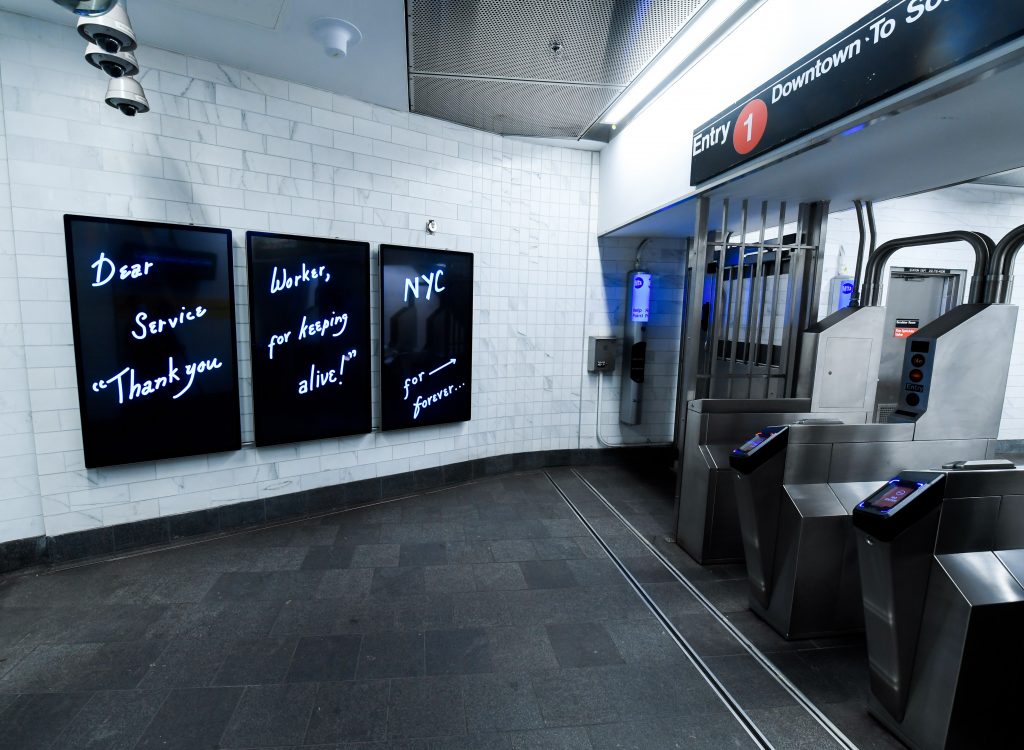 Ukeles, a pioneer in the field of socially engaged art, is most known for her practice focusing on maintenance and sanitation workers. One of her most notable projects is Touch Sanitation (1979-1980), in which she shook hands with all 8,500 employees of the New York Sanitation Department along their routes and places of work, saying to each worker, face to face: “Thank you for keeping NYC alive!” During this year-long project, Ukeles travelled to all of the city’s 59 DSNY districts in a spiralling itinerary she called “Ten Sweeps,” repeating the ritual of shaking hands and saying “thank you” thousands of times throughout an 11-month period. “Now,” says Ukeles, “four decades later, in the midst of this horrific pandemic, my statement becomes newly relevant to the city’s infrastructure service workers, who are physically out there working every day to make sure our city remains a living entity.”

Since 1977, Ukeles has been the official, unsalaried artist-in-residence at the New York City Department of Sanitation and has created pieces that encompass the infinite maintenance work that keeps New York City functioning, such as urban waste flows, recycling, ecology, urban sustainability and our power to transform degraded land and water into healthy inhabitable public places. Mierle Laderman Ukeles is represented by Ronald Feldman Gallery, NYC.