Today artist Stefan Brüggemann unveiled OK (untitled action), a new public artwork in Folkestone. For this major installation, the frontage of a four-storey building in the town’s Creative Quarter was gilded with gold leaf with the word ‘OK’ scrawled over it in black spray paint at large scale. The artwork, commissioned by local not-for-profit arts organisation HOP Projects for its headquarters, has been created during lockdown as a response to the current situation and is typical of Brüggemann’s often-ironic work. 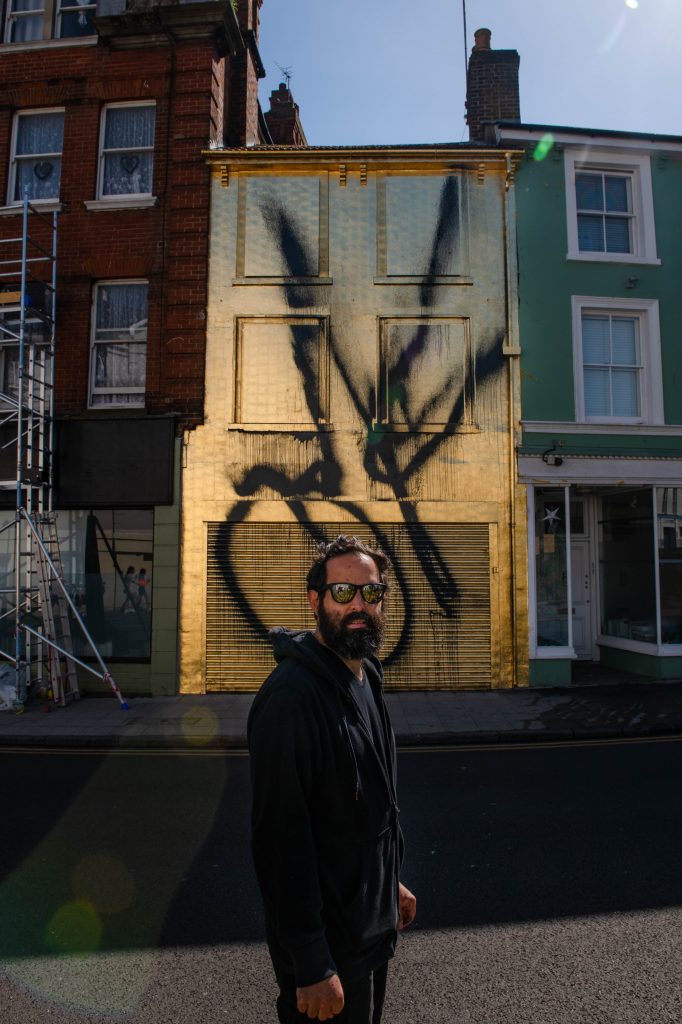 Gold leaf, historically reserved for artworks intended to convey spiritual or indeed economic power, is used by Brüggemann as a canvas for an unceremonious and immediate form of expression: graffiti. The word ‘OK’ is written using thick lashings of paint in a gestural process that leaves the excess dripping down in black lines from the letters. Protest movements and defiant individuals frequently use public writing and graffiti to voice dissent, but that norm is subverted here with the use of a word that suggests indifference, acceptance or even positivity. 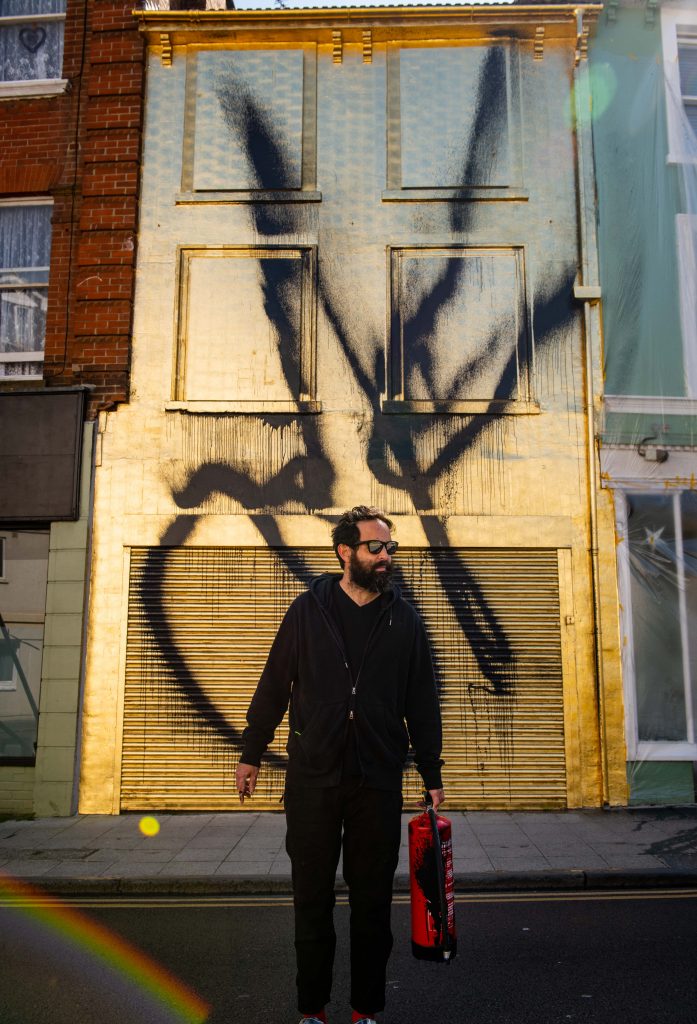 “This false note generates a doubt in the mind; it prompts the viewer to consider what it means to be apolitical, contented, or simply ‘OK’, in the current political climate. There is inherent uncertainty in the word ‘OK’ and seeing it in this context subverts our expectations – is it a symbol of acceptance or resignation or even hope? The meanings of artworks are fluid, often changing depending on the context, and I have deliberately left this installation very open to interpretation. It might connect with people in a particular way in this moment, but that feeling they experience might also shift with time.” 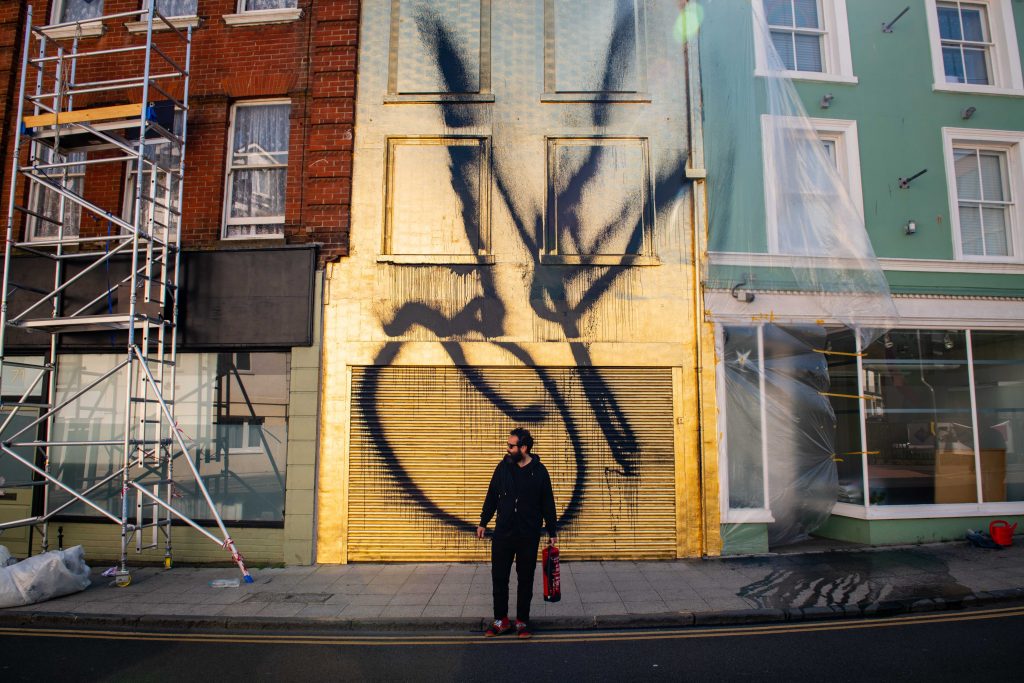 Spanning and sometimes combining installation, sculpture, video, painting, and drawing, Stefan Bru?ggemann’s work deploys text in conceptual installations rich with acerbic social critique and a post pop aesthetic. Born in Mexico City and working between Mexico and London, text functions as a fluid medium, utilised for both form and meaning with a distinctive choice of words that is typically provocative and topical. 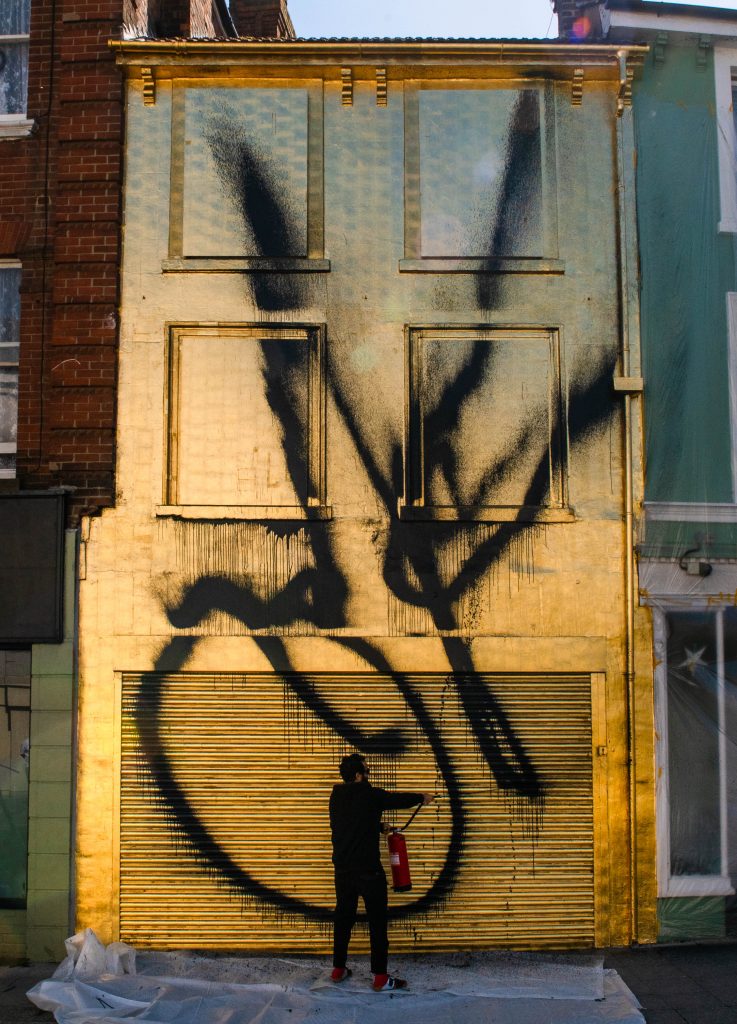 About the artist
Spanning – and sometimes combining – sculpture, video, painting, and drawing, Stefan Bru?ggemann’s work deploys text in conceptual installations rich with acerbic social critique and a post pop aesthetic. Born in Mexico City and working between Mexico and London, the artist’s oeuvre is characterized by an ironic conflation of Conceptualism and Minimalism. In this way, Bru?ggemann’s practice sits outside the canon of the conceptual artists practicing in the 1960s and 1970s, who sought dematerialisation and rejected the commercialisation of art. Instead his aesthetic is refined and luxurious, whilst maintaining a punk attitude. @stefanbruggemann

Hop Projects
HOP Projects CT20 [HPCT20] is a forthright, open and diverse cultural platform that challenges existing paradigms in contemporary visual culture. Established in September 2017, it is a non-profit organisation based in the heart of the Creative Quarter in Folkestone, UK. @hopprojectsfolkestone

Our next ST20 artist: @stefanbruggemann – HOP Projects is excited to commission artist Stefan Brugge?mann to create a new monumental, public-facing and site-specific installation in Folkestone. Produced under COVID19 lockdown, the commission comes at a time when HOP launches its most ambitious and radical arts programme to date – Surface Tensions 2020 (ST20), presenting art that is deeply immersed in the traumas, struggles and violence of our time. Brugge?mann’s work associates a conceptual practice with a raw attitude and criticism that simultaneously calls into question his own approach while it reflects on the present societal context. His work draws their meaning from a strange combination of philosophical concepts and popular imagery, often inspired by punk ideals and attitudes (nonconformism, provocation, and cynicism), which emerge from tautological expressions. They rely on a certain self-contained logic, but also point to the context in which they were conceived and the goal of eventually inserting a pop sensibility into certain conceptual practices. Brugge?mann is represented by @hauserwirth. He recently exhibited at the @CentrePompidou in Paris, @KunsthalleBern in Bern, the @Moca in Chicago, the @YvonLambert Gallery in Paris, the Blow de La Barra in London, the Bass Museum in Miami, the @SchirnKunsthalle in Frankfort and the Museum of Contemporary Art in Cincinnati. Artwork to be revealed very soon – sign up to our mailing list via our website (in bio), to be the first to receive the latest news! Above Images: HEADLINES AND LAST LINES IN THE MOVIES (PROTEST) | Contemporary Art Gallery, Vancouver, Canada | 2014 Billboard Project, London | 2017 TRASH | Fundacio Gaspar, Barcelona | 2016 #SurfaceTensions2020 #ST20 #CreativeQuarterFolkestone #FolkestoneTriennial #KentCulture #TontineStreetFolkestone #RogerDeHaanCharitableTrust #Folkelife #ContemporaryArt #InstallationArt #AltTruths #Stayconnected #keepcreating #artinquarantine #artisreal @fstonetriennial @cq_folkestone @aceagrams @folkelife @kentcreativeart @shapearts @TNLUK @DCMSgovuk @elestudio.cl @sebastienmontabonel? #BassMuseum #BlowdelaBarra #MoCA #ArtforAll #Bruggemann

Stefan Brüggemann “HA HA WHAT DOES THIS REPRESENT? WHAT DO YOU REPRESENT?”