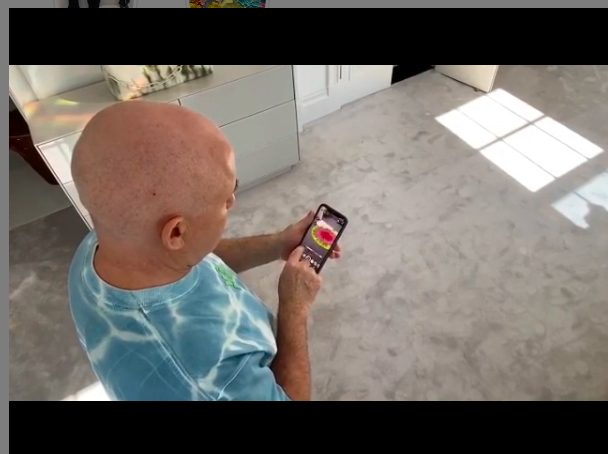 Inspired by Hirst’s colourful paintings and the technique he uses to make them, the new lens enables users to pour virtual paint onto a round, spinning canvas. Layers of vivid paint can be applied in any combination of colours, allowing anyone to create their own spin paintings. The collaboration is in support of global charity Partners in Health, a social justice organisation working to support vulnerable communities in developing countries during the COVID-19 pandemic, providing healthcare for millions of patients worldwide.

“It’s amazing to be working with Snapchat on this totally mega spin art lens and making it possible for millions of people to make their own spin paintings right from their phones. I’m so happy that this partnership also supports Partners in Health, a brilliant and forward-thinking organisation that helps communities in developing countries around the world cope with devastating impact of COVID-19.”

Hirst first experimented with spin art in 1992 at his studio in Brixton, London. The series began in 1994 when Hirst had a spin machine made whilst living in Berlin. At the first exhibition of his machine-made spin drawings, visitors were invited to make their own free drawings on a spin drawing machine made from a drill.
The new lens is available globally to the Snapchat community. Through the shared ‘Our Story’ function, anyone can contribute their own spin art to a virtual gallery, joining creations by others across the world.

About The Artist
Damien Hirst was born in 1965 in Bristol and grew up in Leeds. He studied Fine Art at Goldsmiths college from 1986 to 1989, and whilst in his second year, he conceived and curated the group exhibition, ‘Freeze’. The show is commonly acknowledged to have been the launching point not only for Hirst, but for a generation of British artists.

Since the late 1980s, Hirst has created installations, sculptures, paintings and drawings that explore the complex relationships between art, beauty, religion, science, life and death. Through work that includes the iconic shark in formaldehyde, The Physical Impossibility of Death in the Mind of Someone Living (1991) and For the Love of God (2007), a platinum cast of a skull set with 8,601 flawless pavé-set diamonds, he investigates and challenges contemporary belief systems, and dissects the uncertainties at the heart of human experience. In April 2017, he presented his most complex project to date, ‘Treasures from the Wreck of the Unbelievable’, across two museum spaces in Venice. Exceptional in scale, ‘Treasures’ examines ideas surrounding truth, authenticity and how we construct belief.

His work features in major collections including the British Museum, The Hirshhorn Museum and Sculpture Garden, the Museum of Modern Art, New York, Tate, the Stedelijk Museum, the Yale Center for British Art, The Broad Collection, the Victoria and Albert Museum, Fondazione Prada, and Museo Jumex, among many others.

Snap Inc. is a camera company. We believe that reinventing the camera represents our greatest opportunity to improve the way people live and communicate. We contribute to human progress by empowering people to express themselves, live in the moment, learn about the world, and have fun together.

It's amazing to be working with Snapchat on this totally mega spin art lens and making it possible for millions of people to make their own spin paintings right from their phones ?? I'm so happy that this partnership also supports @partnersinhealth, a brilliant and forward thinking organisation that helps communities in developing countries around the world cope with devastating impact of COVID-19.