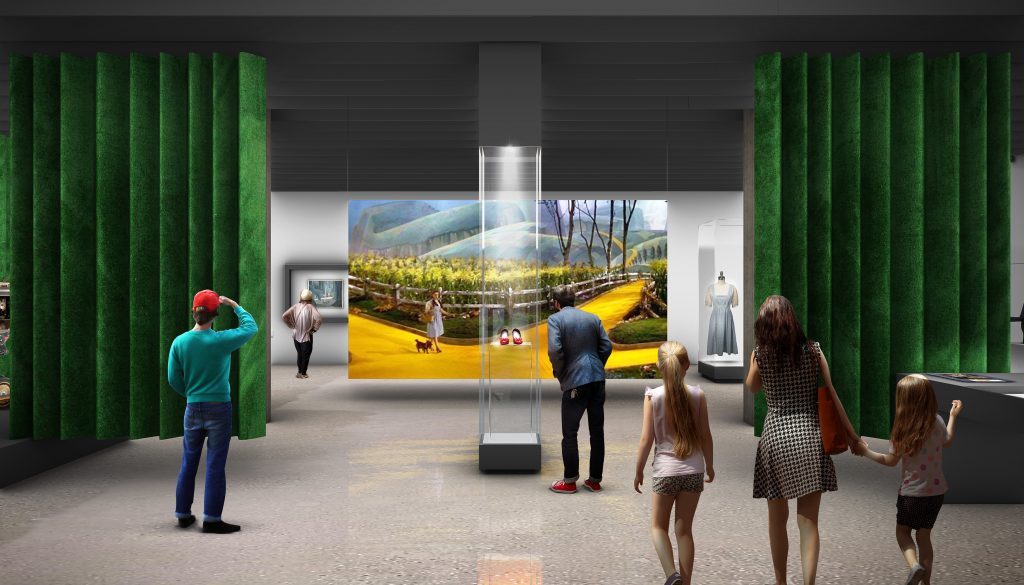 Bill Kramer, Director of the Academy Museum of Motion Pictures has revealed new details of the exhibitions that will be on view when the museum opens to the public on December 14th 2020.

Highlighting the unique position of this institution as the premier museum of cinema in the world’s moviemaking capital, the Academy Museum has invited celebrated international motion picture artists Spike Lee, Pedro Almodóvar, Hildur Guðnadóttir, and Ben Burtt to serve as collaborators, contributing their own visions to the inaugural exhibitions.

“We are opening the Academy Museum with exhibitions and programs that will illuminate the complex and fascinating world of cinema. They will be immersive and dynamic and will tell the stories of the movies—its art, technology, artists, history, and social impact—through a variety of diverse and engaging voices. We will tell complete stories of moviemaking—celebratory, educational, and sometimes critical and uncomfortable. Global in outlook and grounded in the unparalleled collections and expertise of the Academy, these first exhibitions will establish this museum as incomparable in the world of cinema.” 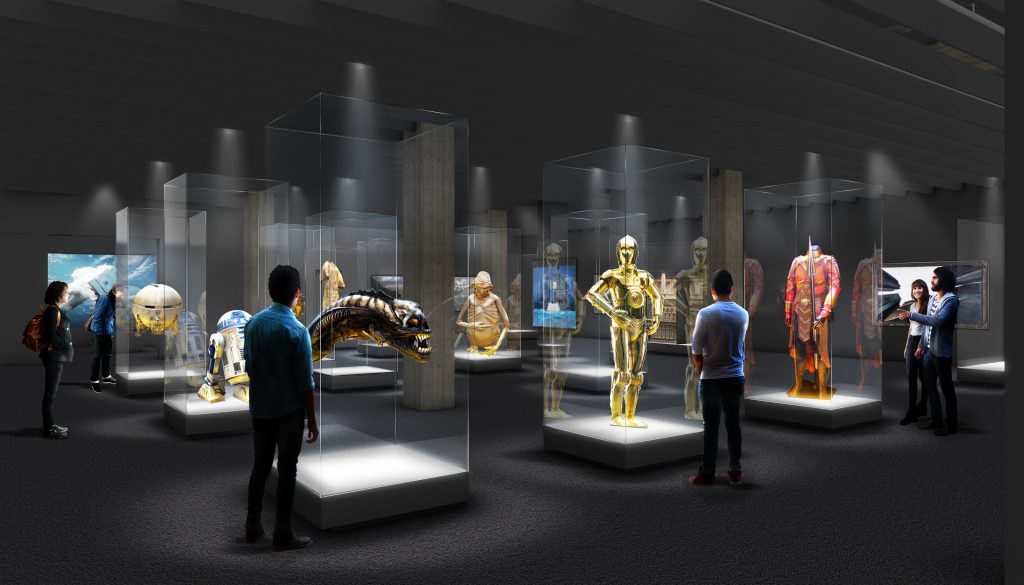 The Wizard of Oz gallery in Stories of Cinema

Kramer also announced that renowned cross-disciplinary design studio wHY Architecture has been retained to finalize the design of galleries spanning three floors in the museum’s Saban Building. The project is led by the Director of wHY’s Museums Workshop Brian Butterfield and Lead Exhibition Designer Jarrod Beck with creative direction from the studio’s founder Kulapat Yantrasast. Recently named one of the world’s top 100 design firms by Architectural Digest, wHY is known for projects including gallery design for the Fogg at Harvard Art Museums, the renovation and expansion of the Asian Art Museum in San Francisco, gallery renovations at the Art Institute of Chicago, and design of the Institute of Contemporary Art, Los Angeles. The studio is currently working on the redesign of the Rockefeller Wing at The Metropolitan Museum of Art and the Northwest Coast Hall at the American Museum of Natural History, both in New York City.

“When our long-held dream comes true, and we open our doors to the world this December, the Academy’s vast collection will be on display to the general public for the first time. The Academy Museum will be an ongoing showcase for the creativity and ingenuity of today’s greatest moviemakers. We are thrilled to have Academy 2 members and Oscar® winners Spike Lee, Pedro Almodóvar, Hildur Guðnadóttir, and Ben Burtt participating in our opening exhibitions.”

The exhibition experience of the Academy Museum will begin in the Grand Lobby of the Saban Building with the Spielberg Family Gallery—which is open to the public without charge. This soaring, glass-walled gallery will serve as an introduction to the museum’s exhibitions by surrounding visitors with multiple screens featuring a rapid immersion into the history of cinema, from the Lumière brothers to present day.

Continuing to the second and third floors, museumgoers will discover the 31,000 square-foot, two-floor core exhibition Stories of Cinema in the Rolex and Wanda Galleries. Stories of Cinema will connect audiences to the celebratory, complex, diverse, and international history of motion pictures. All aspects of the arts and sciences of moviemaking will be explored in the Stories of Cinema galleries, which, like cinema itself, will evolve and change over time— highlighting different movies, artists, eras, genres, and more.

Adopting the approach that there is no single narrative tied to the development of cinema, this exhibition will showcase multiple stories from a variety of voices and perspectives. Stories of Cinema will include galleries developed in collaboration with Academy Award®- winning writer-directors Spike Lee and Pedro Almodóvar, Academy Award-winning composer Hildur Guðnadóttir, and Academy Award-winning sound designer Ben Burtt. These moments will help visitors gain insight into the work, passions, and influences of these remarkable movie artists.

Within Stories of Cinema, a gallery devoted to The Wizard of Oz takes visitors behind the scenes of this classic movie to explore the many disciplines that made this film come to life—screenwriting, casting, make-up design, costume design, production design, sound design, special effects, acting, directing, producing, and more. Connected to this experience will be galleries that dive deeper into the worlds of casting and performance; the creation of identity through costume, hair, and makeup design; the various components of sound design; the creation of story; and the work of cinematographers.

Other Stories of Cinema galleries will be devoted to showing how worlds and characters are created in science fiction and fantasy movies through the collaborative work of production designers, visual effects artists, and costume designers; how documentaries and narrative movies reflect and impact social issues; hand-drawn, stop-motion, and digital animation; a history of the Academy Awards; and significant moments in cinema history as told though a diverse array of vignettes spotlighting movies and movie artists such as Bruce Lee, Emmanuel “Chivo” Lubezki, Oscar Micheaux, Citizen Kane, and Real Women Have Curves.

On both floors, visitors will be surrounded by moving images, sound, props, costumes, scripts, posters, production and costume design drawings, matte paintings, photographs, backdrops, animation cels, puppets, maquettes, and more. While Stories of Cinema will celebrate and champion the stories, art, and artists of cinema, complex and difficult stories also will be told.

Adjacent to Stories of Cinemas will be three immersive experiences. Visitors will experience advanced and iconic moviemaking technologies firsthand in the Hurd Gallery, a dramatic, 34- foot double-height space. The Hurd Gallery’s inaugural installation will feature the original multi-camera rig from The Matrix, directed by Lana and Lilly Wachowski. Visitors will be able to learn about the history of this technology and how the film’s Oscar-winning visual 3 effects—led by Visual Effects Supervisor John Gaeta—were made. Also, they will have the opportunity to reenact their own “Bullet Time” moment on a recreation of the original green screen set.

Located on the third floor in the East West Bank Gallery, the Oscars Experience will create an immersive environment that simulates the experience of visitors walking onto the stage at the Dolby Theatre in Hollywood and accepting an Oscar. Also located on the third floor will be a gallery devoted to special collections. This space will open with an exhibition that explores the foundation of cinema, featuring a collection of pre-cinema objects, including magic lanterns, zoetropes, camera obscuras, a Cinématographe Lumière, and more. On the fourth floor, the 11,000-square-foot Marilyn and Jeffrey Katzenberg Gallery will be dedicated to a regularly changing series of large-scale temporary exhibitions. The debut temporary exhibition Hayao Miyazaki is curated by the Academy Museum in collaboration with Miyazaki’s Studio Ghibli. Taking visitors on a journey into the enchanted and complex world of Miyazaki’s animated movies, this will be the first major retrospective of his work in the Americas. Using original production materials from Studio Ghibli’s archives, many of which are leaving Japan for the first time, the exhibition will present more than 300 concept sketches, character designs, storyboards, layouts, cels, backgrounds, film clips, and immersive environments. This exhibition represents the first time that Studio Ghibli has collaborated with an outside organization to curate a show on Hayao Miyazaki.

Following Hayao Miyazaki, in Fall 2021 the Academy Museum will present Regeneration: Black Cinema 1900–1970, exploring the history, artists, and visual culture of Black cinema in America and its manifold expressions from its early days to the Civil Rights movement and just beyond. Regeneration will be the first exhibition of its kind—a research-driven, in-depth look at Black participation in American filmmaking.

The Academy Museum’s 1,000-seat David Geffen Theater and 288-seat Ted Mann Theater will present a year-round calendar of screenings, retrospectives, film series, museum member programs, panel discussions, family programs, and symposia. Programs will include retrospectives and thematic series that illuminate the artistic and cultural contributions of a broad range of international film artists. Programs include: Impact/Reflection, which will focus on social impact, activism, and representation; In Conversation, which will feature movie artists in dialogue with those who have influenced, inspired, and informed their work; Inside the Academy, which will explore key moments in the history of the Academy and the Academy Awards; Branch Selects, where members of Academy branches will screen movies significant to their craft; Oscar Matinees, which will be Saturday and Sunday afternoon special screenings of Academy Award-winning and nominated movies; special screening series co-curated by movie artists; and a pair of annual programs, one devoted to film preservation and one focused on emerging movie artists.

Shari Frilot also joins the Academy Museum as a Guest Curator for new technology and expanded cinema. She is currently Chief Curator, New Frontier at Sundance—a program that she conceptualized and launched—and a Senior Programmer of the Sundance Film Festival, focused on American narrative features and movies that experiment and push the boundaries of conventional storytelling. Shari previously served as Co-Director of Programming for Outfest and Festival Director of MIX: The New York Experimental Lesbian & Gay Film Festival.

Gary Dauphin, Associate Curator of Digital Presentations, is an award-winning writer and digital content producer whose writing has appeared in Artforum, Bidoun, Interview, The Root, The Village Voice, and Vibe. He oversaw the launches and relaunches of major African American websites, including AOL Black Voices, Henry Louis Gates Jr.’s Africana.com, and Black Planet.com, and has held positions at USC’s Annenberg School for Journalism and KCETLink.

Through its collections, long-term exhibitions, temporary and traveling exhibitions, publications, and programs, the Academy Museum is committed to representing the diversity and scope of cinema history. The museum is working closely with its Inclusion Advisory Committee, chaired by producer and CEO of Gamechanger Effie Brown, to ensure that museum content is inclusive for all visitors. In addition, the museum is working with representatives from all 17 branches of the Academy’s membership to develop and refine museum content and programming related to the expertise of each branch.

About the Academy Museum of Motion Pictures
The Academy Museum will be the world’s premier institution dedicated to the art and science of movies. Opening on December 14, 2020, the Museum will be simultaneously immersive, experimental, educational, and entertaining. More than a museum, this dynamic film center will offer unparalleled experiences and insights into movies and moviemaking. Designed by Pritzker Prize–winning architect Renzo Piano, the Museum is restoring and revitalizing the historic Saban Building—formerly known as the May Company building (1939)—at the corner of Wilshire Boulevard and Fairfax Avenue in Los Angeles. The Saban Building will feature six floors, including exhibition spaces, the 288-seat Ted Mann Theater, the Shirley Temple Education Studio, special event spaces, conservation areas, a café, and store. The new spherical addition will connect to the Saban Building via glass bridges and will feature the state-of-the-art 1,000-seat David Geffen Theater and the rooftop Dolby Family Terrace with its sweeping views of the Hollywood Hills.