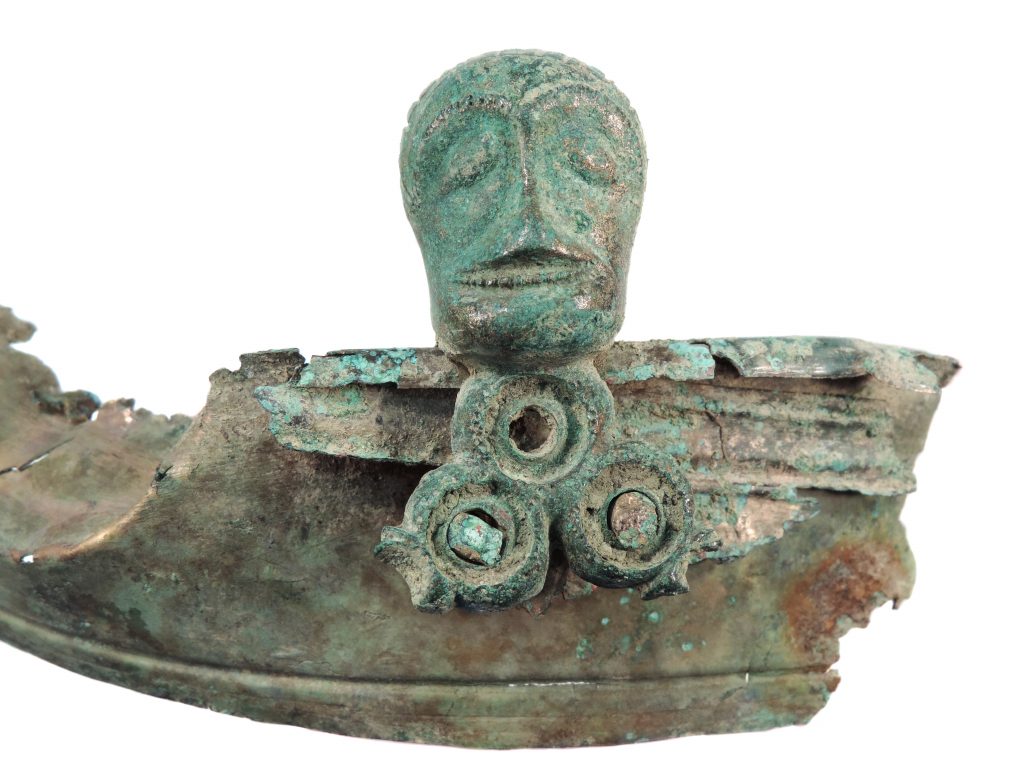 Copper alloy fitting from bucket, in the shape of a human face, from Lenham, Kent. Iron Age c. 50BC
© The Trustees of the British Museum

The British Museum today reveals that the number of Treasure finds made by members of the public has once again hit a record level. Treasure – generally defined as gold and silver objects that are over 300 years old, or groups of coins and prehistoric metalwork – reached a preliminary figure of 1,311 across England, Wales and Northern Ireland in 2019.

Some of the most significant recent Treasure finds include a beautifully preserved 1,100-year-old medieval brooch, unearthed in Norfolk after a tipper truck delivered spoil to a new location. The brooch is a rare type for this period, and is intricately decorated with plants and animals in the lively ‘Trewhiddle’ style. Another find is a well-used Iron Age drinking set, including a 2,000-year-old bucket adorned with mythical creatures and an unusual humanoid face. Other finds of note include a Roman Britain coin minted with an earlier coin die, making it a uncommon hybrid from a period when Britain first broke away from Europe, and a solid gold Bronze age arm ring, the type of which is so scarce we are currently unable to determine whether it is British or Irish in origin.

“These discoveries by the public are vital for advancing our understanding of Britain’s diverse history, and it is incredibly encouraging that so many finds have been voluntarily recorded through the British Museum’s Portable Antiquities Scheme (PAS). PAS and Treasure are truly national partnerships with museums, experts, Finds Liaison Officers and members of the public collaborating together to aid our understanding of the past.”

A total of 81,602 finds were recorded with the British Museum’s Portable Antiquities Scheme (PAS) in 2019, deepening our understanding of history and demonstrating best practice as finders have no legal obligation to report them, but do so voluntarily. Almost 90% of these archaeological items were discovered by metal detectorists. Norfolk was the county which produced the most finds, followed by Suffolk and Hampshire. Currently there are more than 1.4 million objects recorded by the PAS on its online database finds.org.uk, which is freely accessible to the public. The PAS is managed by the British Museum in England and Amgueddfa Cymru – National Museum Wales, and exists to document archaeological objects found by the public, to further our understanding of the past. Part of the British Museum’s commitment to its National Programmes work around the UK, the PAS is a partnership project, working with about 100 national and local partners.

The latest Treasure and PAS Annual Reports, covering 2017 and 2018 respectively were released today at an event at the British Museum and announced by Caroline Dinenage MP, Minister of State for Digital and Culture. The reports also highlight that 399 of the 1,266 Treasure finds reported in 2017 have been acquired by museums, enabling them to be seen and enjoyed by the public. The vast majority of these (92%) are acquired by local museums. The reports also reveal that the number of Treasure cases acquired through donation (where finders or landowners waive their rewards) was 112 cases – 26 more than at the same point last year.

“I am very pleased that a record number of treasure finds have been unearthed and it is brilliant that they will now go on display in local museums across the country. Each one of these valuable discoveries tells us more about the way our ancestors lived and I want to congratulate all those who played a part in helping uncover more about our shared history.”

Finds on display at the launch

This selection of objects on display are a small sample of some of the significant artefacts that are recorded every year through the Portable Antiquities Scheme and/or reported as Treasure. They highlight the breadth of important objects being discovered, those on show today dating from the Bronze Age to the Early Medieval period and made of a variety of materials. In their own way, each contributes further to our understanding and appreciation of the past.

Early Medieval silver and niello brooch from Great Dunham, Norfolk (2019 T477) – Ninth century silver brooch with intact spring, pin and catch plate for securing it, found in a closed position, with the front of the brooch embellished in inlaid niello. A rare find of this condition and type, the brooch is incredibly well-preserved. A distinctive stylized Anglo-Saxon decoration called ‘Trewhiddle’, featuring zoomorphic beasts, plant motifs and geometric design, helps date the brooch to the ninth century, in line with similar finds from this period. Whilst we know the findspot of the brooch, an investigation of the site revealed that the topsoil was composed of recently delivered spoil from a tipper truck delivering from somewhere else in Mid-Norfolk. It is possible that the brooch therefore originates in the region of Pentney, Norfolk given the similarity with that spectacular collection of brooches, which are on display in the Sutton Hoo gallery of the British Museum, and whose virtuoso craftsmanship and inventive decoration put them in the first rank of Middle Saxon metalwork.

A Carausius radiate from Headbourne Worthy, Hampshire (FASAM-91C217) – This bronze Roman coin, known as a radiate, would have been struck at the mint of London as one of the final issues of the British usurper emperor Carausius (AD 286–293), who broke Britain away from Europe. The coinage of Carausius’ reign varied significantly with nearly 4,000 varieties struck during a reign of just seven years, making the inscriptions and designs of each of these variants important for understanding the coinage as a whole. This radiate has an earlier obverse (‘heads’) type and inscription than would be expected from this period, suggesting that earlier coin dies could have been reused to create this radiate. This reuse is an important piece of evidence for the development of Carausius’ coinage, which may not have otherwise come to light without the detailed, systematic recording of coins like this through the PAS. Finds reported through the PAS have produced well over 100 new varieties and have been such a significant source of data for Carausius’ coinage that they will be published in the new standard reference work for Carausius next year. This coin was generously donated to the British Museum by the finder, Alan Cracknell.

Iron Age vessels from Lenham, Kent (2019 T1105) – A hoard or grave assemblage from the mid-first century BC discovered in Kent by Rick Jones which comprises a copper alloy bowl, copper alloy fittings from a wooden bucket and part of a clay pot. The bucket in particular is a rare find, with pairs of hippocamps (creatures with the head and forelimbs of horses and a fish-like tail) facing one another – an unusual choice of decoration. Between the hippocamps an animal that could be a deer or horse lies on its back, legs kicking in the air whilst a bird-like creature with talons outstretched and a hooked beak stands behind the right hippocamp. The bucket’s two handle fittings are humanoid with eyes, prominent nose, pronounced chins and swept back hair. The two faces are slightly different: one has dotted decoration along the mouth, brows, hairline and around the back of the neck, whilst the other is plainer with a slimmer jawline. Close examination of the fittings helps us to understand how the bucket would have been used. The plainer mount appears more worn, and the attachment mechanism has also been repaired, with new holes pierced for reattachment. This was clearly a cherished and much-used object. Buckets like this are usually found in high-status cremation graves, several of which are known in Kent and on the near continent. They probably formed part of a drinking set, used for serving mead, wine or beer at feasts. Perhaps the people buried with these objects hosted such feasts in life, or maybe this was a way for the living to share the funeral feast with them.

Bronze Age gold arm ring from St Bees, Cumbria (2019 T645) – Found by Billy Vaughan of Whitehaven, Cumbria, this is an eighth century solid gold arm ring with shallow punched dots as decoration that extends across most of the outer ring, much like other rare Bronze Age rings that have been found. The arm ring is similar to those that have been found in County Donegal and Buckinghamshire, but it is unclear whether the arm ring is of the Irish or British type. There is noticeable wear to the outer edge of the object as the surface is smoother and the punched dots are much shallower, which suggests this was frequently worn by its owner. Weighing a substantial 300g of pure gold, the composition of the arm ring indicates the wealth and long-distance connections that were held by certain people during this Bronze age period.