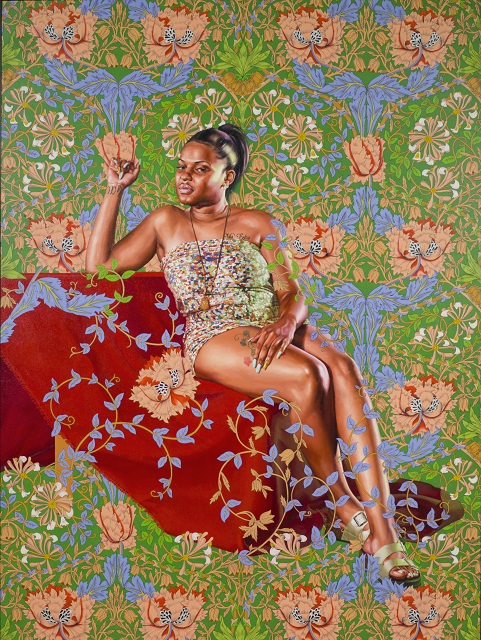 The Yellow Wallpaper is an exhibition of new portraits by American artist Kehinde Wiley. This will be the first solo exhibition of new work shown by Wiley at a public institution in the UK and also the first to feature exclusively female portraits. The works feature women that the artist met on the streets of Dalston and offer a visual response to American novelist Charlotte Perkins Gilman’s acclaimed feminist text, The Yellow Wallpaper (1892).

By applying the visual vocabulary and conventions of glorification, wealth, prestige, and history to subject matter drawn from the urban fabric, Kehinde Wiley makes his subjects and their stylistic references juxtaposed inversions of each other, forcing ambiguity and provocative perplexity to pervade his imagery. As technically impressive as they are conceptually complex, Wiley’s portraits feature young black men in classic heroic poses, destabilizing canonical ideas of white masculinity and power. In his related, ongoing “World Stage” series, Wiley’s heroic figures are depicted in front of colorful background patterns that make specific reference to textiles and decorative patterns of various cultures, from 19th-century Judaica paper cutouts to Martha Stewart’s interior color swatches. Wiley’s penchant for jarring juxtapositions stems from his desire to complicate notions of group identity.